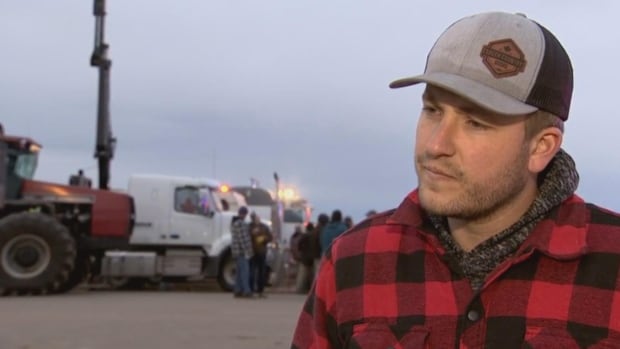 
New charges have been laid against protesters involved in the Coutts border blockade earlier this year, including Marco Van Huigenbos, a Fort Macleod town councillor.

In a written release, RCMP called the three men “key participants of the Coutts border blockade,” which took place between Jan. 29 and Feb. 15.

The three are due in court on Oct. 4.

Van Huigenbos’s lawyer, Yoav Niv, says he has not yet received disclosure, which would shed light on why the Mounties have laid the mischief charge. Niv went on to say his client is “presumed innocent.”

Two others — Luke Berk, 62, and 39-year-old Johnson Law — were accused of less serious offences and have since seen their charges withdrawn. Prosecutor Steven Johnston has declined to explain why the charges were dropped.

In a letter posted to the town’s website, Feyter expressed “grave concerns” about Van Huigenbos’s role as a blockade organizer.

“To be clear, council respects the rights of peaceful protest, but that does not extend to organizing an illegal blockade of a highway in border crossing that halted international travel and trade for over two weeks and disrupted our municipal neighbour, the Village of Coutts,” wrote the mayor.

Van Huigenbos has a duty to act in good faith “and in the best interests of Fort Macleod at all times,” reads the letter, adding that subsequent instances of “unacceptable behaviour may result in further sanction.”

When asked for comment Friday, Feyter issued a brief statement, explaining that under the Alberta Municipal Government Act, Van Huigenbos is allowed to continue serving.

“If convicted, the conviction would be reviewed to determine if the member of council, Marco, can continue to serve,” wrote the mayor.

The bulk of the charges were laid following Feb. 14 raids on trailers that had been set up on Joanne Person’s property near the protest site. Person also faces charges connected to the blockade.

During the execution of the search warrants, police seized more than a dozen firearms as well as ammunition and body armour.

Newly unsealed court documents show RCMP ran an undercover operation and a rarely used “imminent harm” wiretap to justify the execution of search warrants and the laying of charges.

RCMP believed the men accused of conspiring to murder police officers were stockpiling weapons to arm themselves and others in preparation for a standoff with police.

When interviewed the day after the raids, Van Huigenbos told CBC News the protest was “infiltrated by an extreme element” and said the remaining protesters had decided to “peacefully leave Coutts and return to [their] families.”