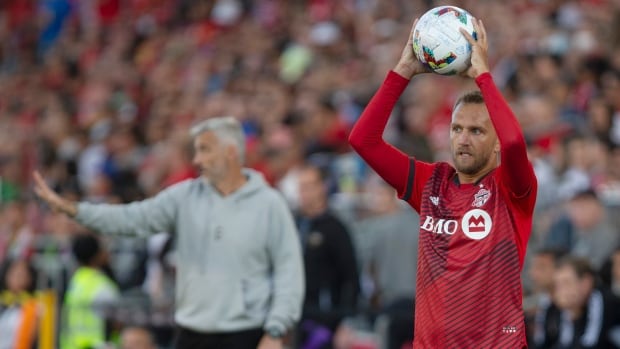 
Veteran defender Domenico Criscito, who announced his retirement from Toronto FC in mid-November, has resurfaced with his former club Genoa in Italy.

Criscito, who turns 36 on Friday, joined the MLS team in late June on a free transfer from Genoa. The Italian fullback made 16 appearances in all competitions for Toronto before announcing his retirement Nov. 15.

“Thank you very much, Toronto FC, for these six beautiful months,” he said in a statement at the time.

“My family and I enjoyed our time in this incredible city, and we felt a part of this great family from Day 1. It is time for me to go home and evaluate what I will do for my future.”

That future is back with Genoa, which announced this week that Criscito was returning to the fold as of Jan. 2.

“Welcome back Mimmo!” Genoa said in a social media post.

“Happy to be back home,” Criscito said in Italian in a social media post that showed him holding up a Genoa jersey with the No. 4 he wore there before.

Criscito is set to finish out the current season with Genoa as a player before joining the Serie B club’s youth teams coaching staff.

Criscito began his pro career with Genoa, making his debut in Serie B in June 2003 at the age of 16. Criscito joined Serie A team Juventus soon after before he returned to Genoa on a loan that turned into a permanent move.

He left Italy in 2011 for Russia’s Zenit Saint Petersburg before returning to Genoa in 2018.

Criscito scored 51 goals in 554 appearances across Europe before coming to MLS on a free transfer, joined soon after by fellow Italians Lorenzo Insigne and Federico Bernardeschi, both of whom are expected back with TFC in 2023.

His lone goal for TFC was a highlight-reel volley in a 2-2 tie with the visiting New England Revolution in mid-August.

Criscito, whose MLS salary was a pro-rated US$1.51 million in 2022, was signed with Toronto through 2023. TFC eventually released him from the contract as he was looking to retire and had a coaching opportunity back in Genoa.

Criscito represented Italy at the 2008 Olympics in Beijing and won 26 caps for his country.

Hurricane Fiona is among 10 most expensive climate disasters worldwide: report