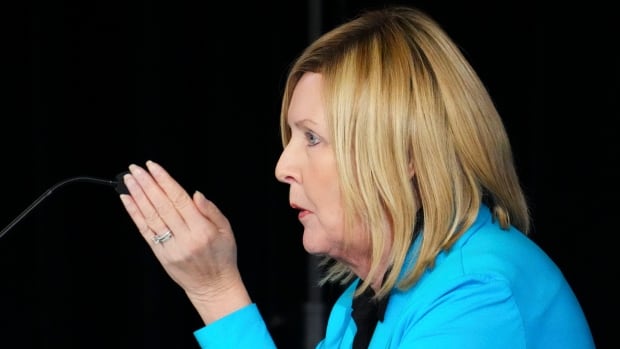 
Ottawa’s former police chief said in late January that convoy protesters about to descend on the capital would be gone by the end of the first weekend, according to the former chair of the oversight board for Ottawa police.

Coun. Diane Deans, who was ousted as chair of the board during the height of the protest and ensuing occupation of Ottawa’s downtown, testified on Wednesday at the Public Order Emergency Commission, which is examining the federal government’s use of the Emergencies Act.

She said former chief Peter Sloly spoke to the board during a briefing on Jan. 26, two days before protesters began arriving.

“He said that he would be surprised if they were still here on Monday,” Deans told the inquiry.

She said she’d first become aware of the coming threat two days earlier, on Jan. 24, when Sloly briefed her on the latest intelligence.

Deans said despite Sloly’s assurances, she had her own concerns about the size of the convoy, and their considerable financial backing.

“The more I was watching this the more concerned I was getting,” Deans said. “I think there was a recognition that this was unique among demonstrations.”

Deans said Ottawa police assured the board they were in communication with some protest leaders, but that those leaders represented only about 70 per cent of the overall crowd.

The question of whether Ottawa police had the resources to deal with the protest wasn’t discussed during that Jan. 26 meeting, Deans said.

That same day, a provincewide police bulletin went out stating “there is no express departure date for when parties disperse or when the action will end,” but Deans said the board was never made aware of that information.

“Maybe it was hopefulness, I don’t know, but I had the impression that [Ottawa police] believed they were going to leave,” she testified. “At this point that wasn’t being discussed.”

Nor were specific operation details discussed at that first board meeting, Deans testified.

“They did not provide the board with a detailed operational plan.”

She said it began to dawn on her by Tuesday that many of the protesters weren’t planning to go anywhere. It took until the Family Day long weekend, about three weeks later, for the core to essentially be cleared.