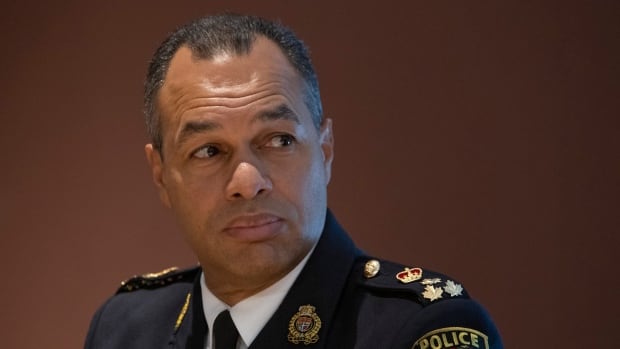 Sloly, who resigned on Feb. 15, also told the Public Order Emergency Commission he does not believe a different approach by the Ottawa Police Service (OPS) would have prevented the demonstrations from gridlocking the capital last winter.

Sloly will tell more of his side of the story in his highly anticipated appearance before the commission Friday morning, set to get underway at 9:30 a.m. ET. CBC News will carry it live online.

Sloly has sat for four interviews with the commission’s lawyers since late August; his most recent interview was on Oct. 5. A summary of what he said in those interviews was tabled as evidence at the inquiry earlier this week.

“Sloly does not believe that [the Ottawa Police Service] could have done anything materially differently on a big-picture level given the unprecedented national security crisis that the OPS was faced with,” says the summary of Sloly’s witness interview.

“There were structural problems in the national security, police and justice [structures] that long predated the Convoy events and were badly exposed during this paradigm shifting and unprecedented event.”

One of the biggest criticisms levelled at Sloly and other members of the Ottawa Police Service was that they ignored warnings that protesters were going to stay in the city until their demands for a new government and a repeal of all vaccine mandates were met.

The Public Order Emergency Commission inquiry has heard that Ottawa police expected most of the protesters to leave after the first weekend and did not have a contingency plan in place after Monday, Jan. 31.

Sloly told the commission he first learned a crowd of protesters was travelling to Ottawa back on Jan. 13, when he received a report on the “Freedom Convoy” from Project Hendon, an intelligence sharing network led by the Ontario Provincial Police.

WATCH | ‘You could feel the tension’: Retired OPP chief superintendent on Sloly

Pardy was questioned by the commission’s lawyer on how Sloly dealt with police forces during the convoy. He describes a very tense environment and people sitting with their ‘heads hanging’ during meetings.

The OPP would continue to send Project Hendon reports to the Ottawa police.

During one of Sloly’s interviews, the commission’s lawyers showed him a Jan. 26 Project Hendon report warning that elements of the protests could pose a risk and some supporters supported “fringe ideologies.”

Sloly responded that such risks could materialize at most major events.

“This passage therefore did not assist Chief Sloly to determine whether the Freedom Convoy posed a major problem,” says his witness testimony.

A Jan. 28 OPP intelligence report shared with Sloly says that “available information indicates that the protesters plan to remain in Ottawa at least” until Feb. 4.

Sloly told the commission lawyers that he understood that to mean the protest would take place primarily over one weekend, with a small group remaining afterwards.

While the briefings flagged that supporters were being supplied with donations of cash, food and water, Sloly said that didn’t suggest this event would be unlike other major protests.

Sloly was also forwarded a Jan. 21 email from Ottawa Police Sgt. Sean Kay that said the goal of the convoy was to remain in Ottawa until the restrictions are repealed.

Sloly said that if Kay had those concerns, he would have expected him to inform his supervisors, who should have made changes to the operational plan.

While the OPS was signalling to the city and the public that the protests would last one weekend, a memo was sent to officers on Jan. 24 restricting their discretionary time-off to prepare for the Freedom Convoy’s arrival.

It stated that while “the event has been scheduled for one day, it is highly likely that many participants will not leave the city for an undetermined amount of time.”

Asked about the wording of that memo, Sloly “indicated that the language of the excerpt was not meant to be exact,” says the summary.

Sloly told the commission he feels the situation in Ottawa exposed structural and resource deficits related to national security, including an “excessive focus on Islamist extremism at the expense of other threats in Canada’s national security.”

On Thursday, the commission heard from the head of the Ontario Provincial Police, who said he thought the OPS’s operational plan would bar the trucks from the parliamentary precinct and provide for buses and shuttles to allow protesters to access the downtown area.

Sloly told the commission in his interviews that he never received any written or verbal communications from his senior officers, the OPP, RCMP or other partner agencies suggesting that the OPS plan to allow the Freedom Convoy to enter downtown Ottawa was wrongheaded.

Soon after the crowds and vehicles arrived, Sloly said, his team became aware of increasing levels of “threatening and anti-social behaviour” by convoy participants.

Sloly said that by Feb. 1, a Canadian Armed Forces officer had told him the Freedom Convoy “had elements of an insurgency.”

The commission has also heard from witnesses criticizing the OPS’s lack of a plan to cope with protesters if they refused to leave.

Last week, OPS Deputy Chief Trish Ferguson said Ottawa police still didn’t have a new plan by Feb. 4 — a week after protesters and their vehicles had first rolled into the city — because the force was “putting out fires” and dealing with staffing.

“I think we were floundering a little bit in terms of our staffing, in terms of our ability to really take stock of what was going on and then move forward and come up with a plan to get out of it,” she said.

“We lost some time there.”

As part of its mission, the commission is also looking at the actions of police before and after the Emergencies Act was invoked.

It has heard testimony describing a tense and sometimes distrustful relationship between Sloly and the OPP during the protest.

“Overall the tone, I would say, was very antagonistic, it was disrespectful,” retired OPP superintendent Carson Pardy said last week.

Pardy said that while Sloly was asking for backup, the OPP was frustrated with the lack of a concrete plan.

“You need to know what these people are going to be doing when they get there, right down to where they stay and who’s feeding them,” Pardy told the commission.

“You need those basics in place. None of that was in place.”

Sloly told the commission one of his regrets is that a comment he made during the protest — that “there may not be a police solution to this demonstration” — was taken by many as a sign that the OPS was giving up.

He said he meant that Ottawa police couldn’t bring an end to this situation by themselves.

On Feb. 2, he said, he met with Mayor Jim Watson to make that case.

Notes of that meeting, cited in the interview, said Sloly “advised that all options on the table [need] to consider the ‘political option.'”

Sloly said that before the convoy protest landed, the OPS was struggling with low morale and a lack of public trust, especially within racialized and marginalized communities within Ottawa.

“OPS was not functioning optimally, was not well resourced, and its leadership was stretched at the time the Freedom Convoy arrived,” says Sloly’s witness summary.