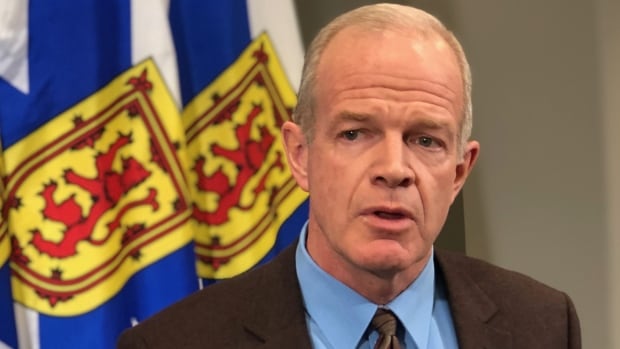 
The RCMP officer who became Nova Scotia’s justice minister says he left the force in 2012 in large part because of his frustration over the force’s “strong opposition” to a proposed public alerting system.

The public inquiry examining the mass shootings in Nova Scotia on April 18-19, 2020, has released a series of written answers from Mark Furey in response to questions posed by the Mass Casualty Commission in August 2022.

The commission is examining the circumstances surrounding the killings, when a gunman dressed as an RCMP officer and driving a replica cruiser killed 22 people in several rural communities across Nova Scotia.

Among a series of questions about Furey’s role and interactions with the RCMP as both an officer and then as justice minister, the commission asked about a briefing note he authored in January 2012 for Chief Supt. Brian Brennan, the criminal operations officer in Nova Scotia at the time.

“Managed properly, the availability and application of a [public alert system] in Nova Scotia could/would be considered an asset to front-line police service providers in response to emergency situations (i.e. forest fires, floods, meteorological events, etc.),” reads the final paragraph of the note.

Furey was the emergency management program officer for the RCMP and told the commission the provincial Emergency Management Office (EMO) had approached his office about a “concept or tool” that would make use of public broadcasting to relay information to the public.

Furey said his briefing note came after “numerous and difficult” discussions with the support services officer and criminal operations reviewer, two high-ranking officers who were “not supportive” of the Alert Ready concept.

“They expressed strong opposition,” wrote Furey in his response to the commission. “The briefing note…reflects what my superiors advised they would approve from my office. There was very clear opposition to the concept of Alert Ready.”

Furey went on to write that his frustration with these superior officers was a “key decision” in retiring from the force early in September 2012.

Criticism about lack of emergency alert

The RCMP’s communications strategy during the 13-hour shooting rampage has been a point of contention for families of the victims, who have raised concerns about the force’s choice to communicate information exclusively through Twitter and Facebook rather than via the provincial Alert Ready system.

They have also been vocal about how long it took RCMP to inform the public that the gunman was driving the replica cruiser and wearing a police uniform.

Provincial officials with EMO told the commission they had been in discussion with the RCMP about the use of Alert Ready since 2011 — but multiple officers have told the commission in testimony over the last six months that either they didn’t know the system existed or that using it would have caused mass panic among the public.

Some RCMP members have even suggested that using it would have led to further loss of life.

But an expert in emergency communications has refuted that perspective, saying there’s no evidence of the “mass panic” response in other jurisdictions where alert ready has been used.

Furey, who was justice minister in Nova Scotia at the time of the shootings, has not been interviewed in person by the commission. He declined an interview with CBC News, citing the inquiry’s ongoing work.

Brennan, who is now the RCMP deputy commissioner of contract and Indigenous policing in Ottawa, testified before the commission on Friday He said he recalled conversations in 2012 about a system that could be used by police for natural or environmental disasters — snowstorms, forest fires or hurricanes.

Brennan said he also recalled conversations about the logistical challenges of using the public alerting system.

“You need to have the ability to have it resourced and managed 24/7 because you can never predict when you might need it,” he said. “So conversations about investment, etcetera. I wasn’t part of any conversations directly with minister Furey in that role…and I don’t recall anything coming to my level for a decision.”

Brennan said the two high-ranking officers who Furey referred to as opposing the proposal would have been authorized to dismiss it on the basis of cost or logistics.

Commission lawyer Jamie Van Wart asked Brennan why considerations weren’t made for the alert system outside of the context of natural disasters.

“From the outside looking in…as a policing organization, it doesn’t seem to be a significant leap to the concept of being able to use a public warning system for a forest fire, say, to think, ‘Oh, wow. This might apply to some policing operational issues where we need to alert the public,'” said Van Wart.

Brennan again suggested the resources and infrastructure in place in 2012 made the Alert Ready system impractical for communicating about a criminal event.

Furey said there was no written response to his briefing note and no further discussion about Alert Ready while he was the emergency management program officer.

EMO director Paul Mason told the commission that his department offered direct access to the alert system to the RCMP and regional police forces in 2016 and 2017, but they declined.

The RCMP’s opposition to the system persisted after the shootings.

In an August 2021 interview, the outgoing police chief in Kentville told the commission that shortly after the shootings, the RCMP had asked municipal chiefs across the province to join them in declaring the Alert Ready system “flawed.”

“We had a meeting called by the RCMP via Teams with all chiefs, and we were asked if we were willing to basically support them on saying the Alert Ready system was flawed,” said Julia Cecchetto.

Cecchetto, the president of the Chiefs of Police Association in Nova Scotia, said former commanding officer Lee Bergerman and Chief Supt. Chris Leather, the two highest-ranking Mounties in the province at that time, were on the call.

“Nova Scotia Chiefs did not support them because we were not necessarily of that opinion,” said Cecchetto.

Mason said Halifax Regional Police and RCMP have since been trained on the Alert Ready system and are now able to issue their own alerts. EMO has also been urging Nova Scotia police forces to follow the lead of New Brunswick, where RCMP issues all alerts for police.

Video: Carlos Alcaraz speaks with CNN after US Open win