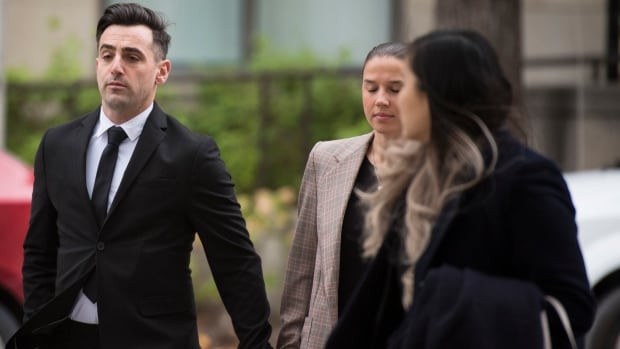 
Canadian musician Jacob Hoggard was sentenced to five years in prison by a Toronto judge on Thursday.

It was the third and final day of a sentencing hearing that began earlier this month.

Hoggard, the former lead singer of rock band Hedley, was found guilty of sexual assault causing bodily harm in June after raping an Ottawa woman in 2016.

The Crown was seeking a sentence of six to seven years for Hoggard, while the defence proposed a more lenient sentence of three to four years.

“Mr. Hoggard’s conviction and sentence sends a message to our community that sexual violence will not be tolerated by our community, by anyone,” said Crown attorney Jill Witkins in a statement to the media.

Immediately after the judge read her sentence, the defence asked for a moment for Hoggard to say goodbye to his wife. The two held each other until Hoggard was cuffed and led away.

Hoggard pleaded not guilty to two counts of sexual assault causing bodily harm at his trial in June. His lawyers had argued that Hoggard had consensual sex with the complainant.

The woman was in her early twenties when Hoggard, who is from B.C.’s Lower Mainland, assaulted her in a Toronto hotel room. She cannot be identified under a publication ban.

A jury deliberated for six days and twice found itself deadlocked on “some counts” before finding Hoggard guilty of sexual assault causing bodily harm.

Hoggard was also charged with sexual assault causing bodily harm against a 16-year-old fan and sexual interference involving that complainant, but was found not guilty on those charges.