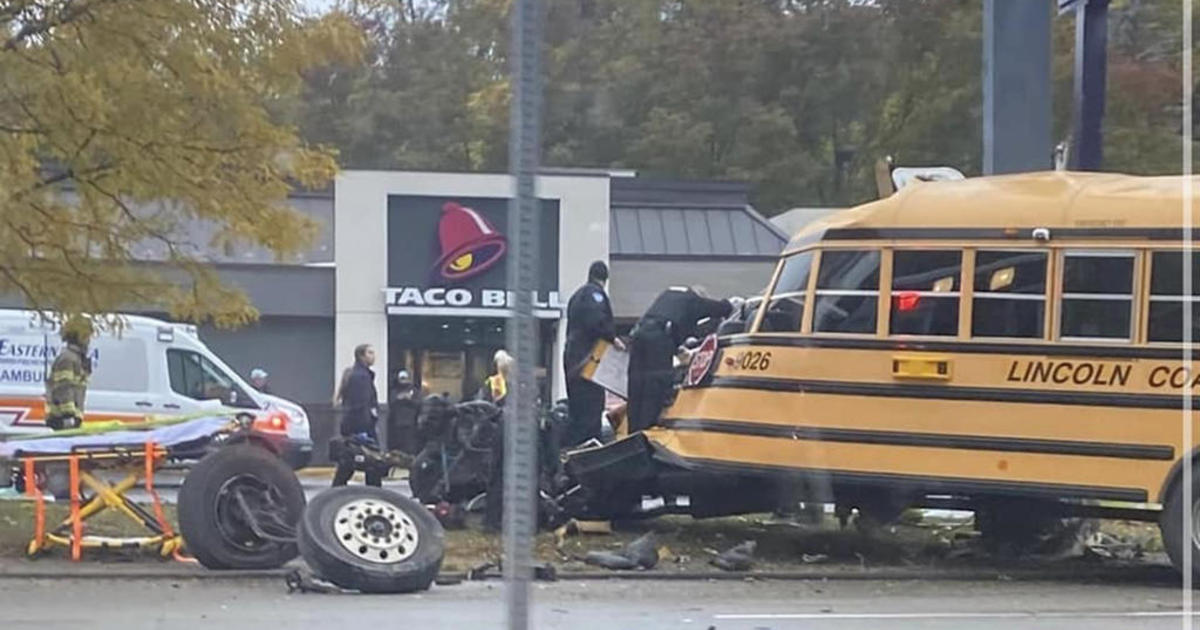 
FOREST HILLS (KDKA) — The driver of a school bus was seriously injured when the bus slammed into the steel support pillar of the famous welcome sign at the entrance to Forest Hills on Tuesday.

The crash was first reported a little after 10 a.m. on Ardmore Boulevard, near the Taco Bell, at Kenmore and Sumner avenues.

The driver of the Lincoln Coach Lines bus had just dropped off a load of students at a Pittsburgh Public School, officials at the scene said. No students were injured.

However, the driver was rushed to a local hospital. He is stable, Allegheny County police said.

It took crews about 30 minutes to pull him from the wreckage. A Good Samaritan stopped at the scene and stayed with the driver until he was freed.

“The man was just sitting like this in the vehicle. He looked like he was still conscious, just kind of shaken up,” said Kenny Ferree, the witness. “I crawled up into the wreckage, the closest I could get to him. His head was bleeding. I had nothing with me; I’m covered in blood. I took my shirt off and I wrapped my shirt around his head and put his head back and I held him.”

A video shot by Ferree shows a close-up of the wreckage.

“I told him my name. He told me his name. We had a little conversation. He wasn’t sure what was going on,” Ferree said.

The front of the bus was mangled, with the engine landing on the ground near the wreck.

“What’s amazing is I was running late today,” Ferree said “Tell me why?”

Accident investigation and reconstruction crews were at the scene trying to determine just how this happened.

Why the Mercedes-Benz EQB can’t be matched