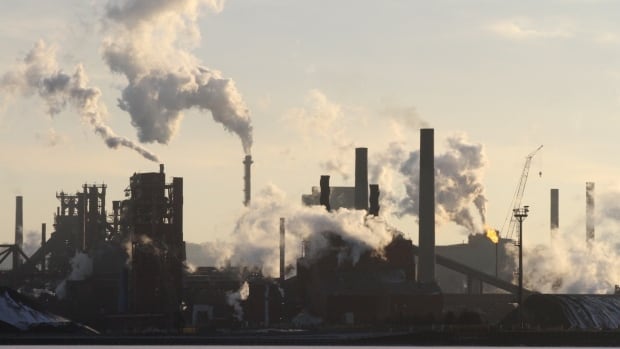 
Ontario’s steel industry is aiming for a dramatic reduction in its greenhouse gas emissions, a move that will help Premier Doug Ford’s government get closer to achieving its climate-change targets.

The three biggest industrial emitters of CO2 in Ontario are all steel plants. Steel production alone accounts for more than 40 per cent of all industrial greenhouse gas (GHG) emissions in the province, more than the refinery, forestry, mining.and chemical sectors combined.

But a push is now on — funded in part by nearly $2 billion from provincial and federal taxpayers — to convert Ontario’s steel plants to using lower-carbon sources of energy. The expected reductions in CO2 emissions stand to make this the Ford government’s single biggest initiative on climate change.

The latest step toward what’s being dubbed “green steel” is Ford’s announcement of a $500 million provincial government contribution to ArcelorMittal Dofasco in Hamilton, the biggest producer of flat-rolled steel in the country and the single biggest industrial source of CO2 emissions in Ontario.

The plan is to convert Dofasco’s coal-fired blast furnaces to electric-powered systems by 2028.

“Car-makers are investing billions and billions of dollars searching for ways to reduce carbon emissions along their supply chain,” Ford said in a news conference Tuesday. “Well, I have news for all of them. That search starts and ends right here in Hamilton with Dofasco Steel.”

Ford’s announcement comes six months after the federal government announced it’s putting $400 million into the Dofasco plant’s conversion, which means taxpayers are contributing about half of the $1.8 billion cost of the project.

The province and the feds are also backstopping another coal-to-electricity conversion project at Algoma Steel in Sault Ste. Marie, number two on Ontario’s list of biggest industrial greenhouse gas emitters.

The projects will reduce the two steel plants’ combined annual CO2 emissions by as much as six megatonnes (MT). Ontario needs to reduce its total annual emissions by about 18 MT from current levels to meet the government’s target for 2030 under the Paris Accord.

“The steel industry is a large emitter, it’s one of the harder-to-decarbonize sectors, and we’re not in a world where we’re trying to phase out steel,” Brooks said in an interview Wednesday.

Despite the potential significance of these emission reductions from the steel industry, Brooks says the Ford government is still a long way from achieving its climate change targets, which are less ambitious than the previous Liberal government’s targets and those now set at the national level.

Steel production is carbon-intensive because the blast furnaces used in the smelting process are fuelled by coal and coke (metallurgical coal).

“We will fundamentally change the way we make steel,” said Ron Bedard, president and CEO of ArcelorMittal Dofasco.

“We will decommission our coal plants and our blast furnaces. Coal will not be used in our future processes here at Dofasco.”

The provincial government is also linking the steel conversion to the North American auto industry’s transition toward electric vehicles.

“The bottom line is this: if the car of the future is going to be electric, then the steel it’s made with needs to be electric, too,” said Vic Fedeli, the minister of economic development and trade.

The Ford government has faced frequent criticism for its approach to climate change after scrapping the previous government’s cap-and-trade system, fighting the federal carbon tax all the way to the Supreme Court of Canada, and watering down Ontario’s targets for reducing CO2 emissions.

Internal estimates by the provincial Ministry of the Environment, Conservation and Parks last fall revealed that the government had put in place policies to achieve only 20 per cent of the emission reductions needed to hit its climate change target for 2030.

Officials say those figures did not account for the reductions to come from the steel sector.