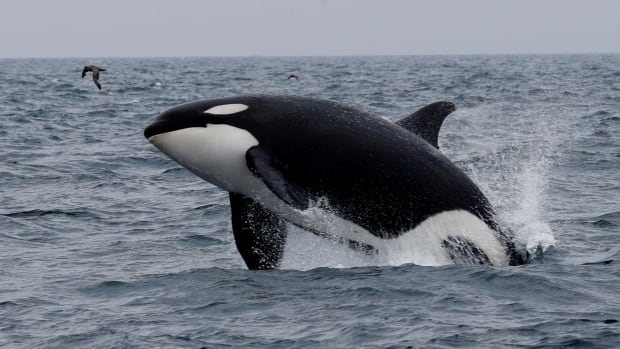 As It Happens6:30Footage shows pod of orcas killing a great white shark and devouring its liver

Great white sharks can no longer claim the title of top predator — at least not off the coast of South Africa.

New drone and helicopter footage shows a pod of orcas ruthlessly pursuing a great white shark in Mossel Bay before going in for the kill. The grisly video culminates with one of the killer whales gobbling up a large chunk of the shark’s liver.

Scientists have long suspected that killer whales have been hunting sharks off South Africa’s coast and driving them from their natural habitat. Now they have “irrefutable evidence,” says shark biologist Alison Towner.

“When I saw the footage, of course, it just confirmed everything,” Towner, a PhD candidate at South Africa’s Rhodes University, told As It Happens host Nil Köksal.

“And as haunting it is to see the behaviour, one can’t help but be awed by it as well. It’s really quite a novel piece of natural history to observe.”

Towner is the co-author of a new paper analyzing the footage, which was published this week in the journal Ecology.

“We had carcasses that were washed up, ripped open, livers missing. We had sightings of orcas in the area, [followed by] disappearances of the white shark,” she said.

Not only does the new footage give her the smoking-gun evidence she’s been looking for, but it allows scientists to observe exactly how the hunt played out.

The video — a compilation of helicopter and drone footage of the same hunt on May 16 — shows five orcas working together to kill a shark.

As one orca hones in on its prey, instead of fleeing, the shark swims tight circles, mimicking an invasive technique that turtles and seals use when trying to escape great whites.

It’s a move that sometimes works out for a shark’s prey — but it didn’t help this great white escape its hunters. That’s because orcas, unlike great whites, hunt in packs.

“I always refer to the orcas as being like the wolves of the ocean,” Towner said. “They’ve kind of got the edge on this because, you know, they’re co-ordinated and they’ve got teamwork, whereas the white sharks are on their own. They’re caught by surprise and they’re basically just panicking.”

It’s no easy feat to make a great white shark panic. But there’s a reason that orcas are referred to as killer whales — even though they are, in fact, dolphins.

“What does everybody associate an orca with, typically? We all think of Free Willy, right? Or Sea World? And we think cute and cuddly, and obviously very charismatic,” Towner said.

But orcas, like great whites, are considered apex predators of the ocean.

“They are prolific hunters. They’re extremely efficient. They’re rather savage actually, because they’re so good at what they do,” she said.

“White sharks have this very apex predator role, and they’re quite feared. But now they’ve definitely been knocked off the top pedestal here.”

Josh D. McInnes, a marine mammal researcher at the University of British Columbia who has studied orcas hunting large mammals, says there are a number of possible reasons the orcas are targeting sharks.

“Killer whales may kill white sharks based on competition for resources, perceived risk to young calves in a pod, or for food,” he told CBC Radio in an email.

“The liver of sharks is rich in nutrients and oil, and makes up a large proportion of the shark’s anatomy. It would make sense for killer whales to feed on this organ.”

Jenny L. Atkinson, executive director the Whale Museum in Washington, says that while this footage is novel, the behaviour likely isn’t.

There have been reports of orcas killing great whites in California since the late ’90s. And a 2109 study found that when orcas show up in shark-infested waters, great whites flee.

“With more people watching and video more accessible, we are going to be documenting more behaviours that seem new or unique to us — but it’s likely not new to them,” Atkinson said in an email.

Driving the sharks away

Towner says the hunt caught on film is part of a broader pattern. In fact, she and her colleagues suspect that three other sharks were killed by that same orca pod that day.

And they believe it all started with two orcas known as Port and Starboard — the latter of whom appeared in the footage chomping down on the shark’s liver.

The deadly duo, Towner said, appear to have be passing their shark-hunting techniques to other orcas.  And the sharks are responding, she said, by getting the heck out of dodge.

After the video was filmed, no great whites were seen in the area for 45 days. They started to reappear in the summer, but then another mangled great white shark carcass washed ashore.

“Since then, there haven’t been any white sharks back in Mossel Bay,” she said.

Towner says she’s worried what this will ultimately mean for the future of South Africa’s great white shark population, and what their loss will mean for the ecosystem at large.

The coast of South Africa, she says, is the sharks’ natural feeding ground. And it’s unclear where the fleeing sharks have taken refuge.

“How many more times can it happen before the entire population is displaced?” she said. “It’s really hard to predict what will happen.”