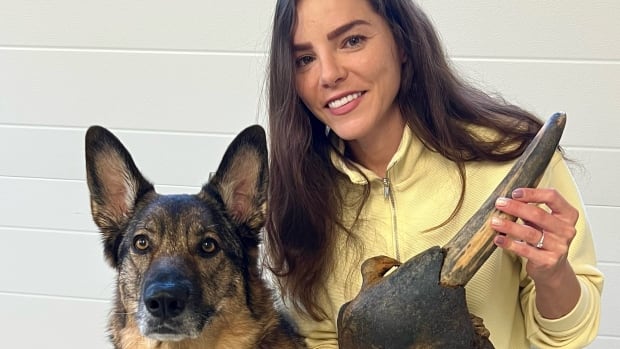 Fiona unveils quirky finds on the beaches of P.E.I.


Earlier this week Jenny Chaisson and her son saw some pictures on social media of what looked like a rusty, green car sticking out of the dune near Miminegash.

They took a ride down to Cape Gage Road, looking for “neat stuff” on the beach. Eventually they came across two old cars, sticking out of the sand along the shore.

“My son played around with the shovel and was shovelling it out a little bit.”

Chaisson said after she posted about their find, she heard from people in the area who said the cars may have been part of an old junkyard.

A little further up the beach they saw some cottages that had been impacted by the storm. Chaisson estimates about 24 metres of land along the shore is missing because of post-tropical storm Fiona.

“It’s a whole different beach now. It’s so wide in some spots, some spots you can’t get through — like it’s quite interesting what she did. Even the rocks that she moved, like the big pieces of rocks that are down. It’s amazing.”

Meanwhile, Jessie Gaudet from Tignish decided to take her dog for a walk on Sunday after the storm.

She hoped to find sea glass, but saw something even more interesting sticking out of the sand.

It was a partial animal skull with one long tusk and six teeth.

“When I hauled it out of the sand and the tusk came out, I thought it was actually a giant claw at the time. And once I realized I’d seen teeth, I knew it wasn’t a claw.”

Gaudet called the New Brunswick Museum. She said they told her to keep it in salt water until they can come and see her discovery.

I wish I could keep it myself but due to preserving it … it’s better that it goes somewhere that it’s going to be kept safe for a long time.”– Jessie Gaudet

“I’m excited. I wish I could keep it myself but due to preserving it … it’s better that it goes somewhere that it’s going to be kept safe for a long time.”