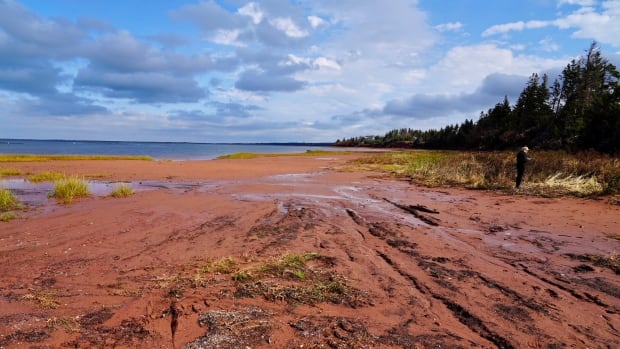 
A picture of how much post-tropical storm Fiona has reshaped Prince Edward Island is beginning to emerge — and in some cases, whole coastlines made of sand and stone have been erased.

Six days after Fiona, the cleanup is far from over, with the majority of the Island still without power, and downed trees and power lines still blocking driveways and roads.

As Islanders begin the long road to recovery, many are wondering where to rebuild and how far from the shore is safe enough.

“I never seen anything like this before,” said Oyster Bed Bridge resident Wayne McCaron, whose home now sits closer to the water after Fiona took a six-metre chunk out of the cliffside.

McCaron’s home is still a few hundred metres back from the water, but a nearby small cottage now sits right at the edge.

“Come this winter, if we get a couple of storm surges … I feel sorry for this fella if he doesn’t soon get out,” McCaron said.

McCaron’s neighbour, Jonathan Davidson, says the surge was so high it threw heavy iron oyster cages right into the treetops.

“And there used to be — like, there were staircases going down. Some of the properties had staircases and they’re just washed away,” he said.

“You can see how sharp of an incline it is now. It’s just — it’s a cliff,” Davidson said. “There was a fairly decent grade that you could walk down at one point, but now it’s just straight down.”

Further along P.E.I.’s North Shore, the entrance to Brackley Beach in P.E.I. National Park was being guarded by Parks Canada staff on Wednesday. Fiona caused the worst damage the park’s iconic sand dunes have seen in a century, leaving the dunes dangerously unstable.

“What we saw was up to 10 metres of the dune completely eroded away,” said Chris Housser, a professor at the school of the environment at the University of Windsor who specializes in coastal science.

“It’s almost like somebody cut the dune completely in half — about 40 percent of the volume of sand in the dune has been lost to the near shore. It will eventually come back, but it’s going to take a lot of time — years to potentially even a decade.”

‘The word that I have to use is the word relocate’

Fiona voraciously ate away at parts of Atlantic Canada’s coast, demolishing wharfs, and sucking homes and shoreline into the sea.

The devastation left in the storm’s wake has prompted calls for the federal government to do more about coastline erosion, by building up breakwaters and raising wharfs.

At a briefing on Wednesday, Minister of Infrastructure Dominic LeBlanc acknowledged the federal government needs to move quickly with new programs and more money.

“The Department of Fisheries and Oceans has tens of millions of dollars annually to repair small craft harbours,” he said.

“That clearly is going to need to be augmented in light of what happened, and I am very confident it will be. We are in the middle of renewing a number of our federal infrastructure programs.”

“We have some money available now around disaster mitigation and adaptation. This is a direct line to climate change .. and to these atmospheric events,” he said.

“In the part of the country I represent, Atlantic Canada, it is exactly these coastal communities that, in the case of a hurricane like we saw last week, face the brunt of these losses … So we need to find the right instructions to ensure people are protected.”

Retired Department of Fisheries and Oceans scientist Denis Gilbert says the unfortunate truth for many people is that they might have to move.

“I’ll be very honest and give you the full amplitude of my thoughts without any filter. I sincerely think that everywhere in Canada — and in the world — people are putting blinders on their eyes, trying to preserve what’s there,” he said.

“The discussions are always to the effect of, ‘Why doesn’t my municipality or the provincial government or the federal government build a nice brick wall … to protect my house?’ The word that I have to use is the word ‘relocate’.”