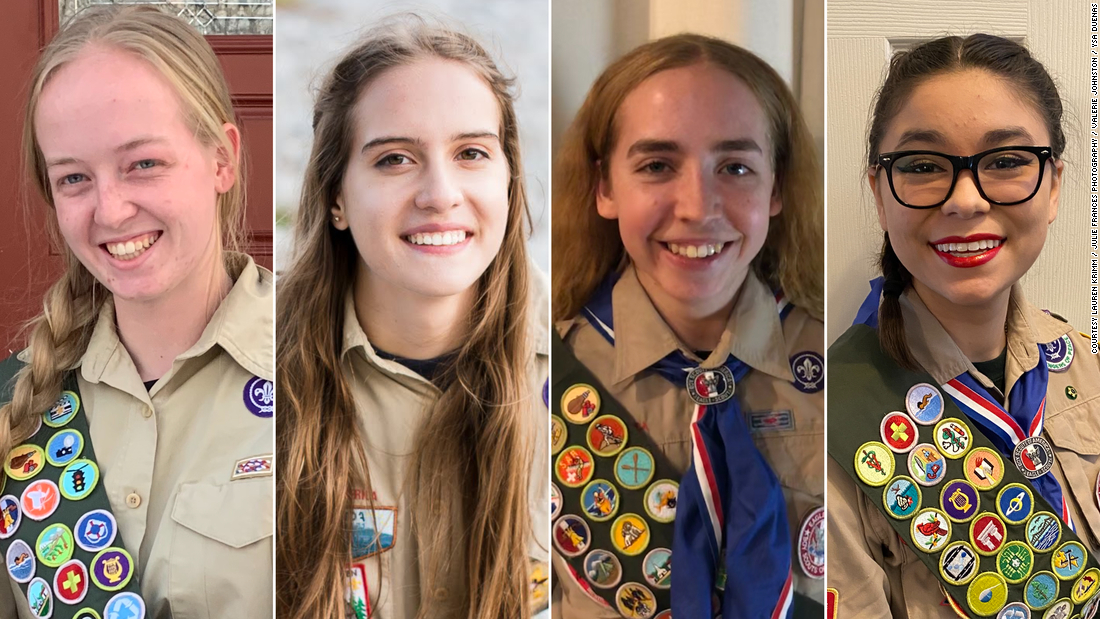 Female Eagle Scouts: For the first time, girls were eligible to be Eagle Scouts — and nearly 1,000 earned the elite rank

That’s when she started attending meetings with her brother. When she turned 8, she got special permission to get an official uniform, and she joined the co-ed group Venturing at 14.

But because she wasn’t a boy, she couldn’t earn badges to achieve the highest rank: Eagle Scout.

“I always wanted to be able to earn everything that my brother and all his friends were earning,” Johnston told CNN. “I had my own book, and I would check off the requirements and everything, so I would wonder like, ‘Well why can’t I earn these?'”

Now a 19-year-old at St. Michael’s College in Vermont, Johnston joined nearly 1,000 women across the country who became part of the inaugural class of female Eagle Scouts in February.

Boy Scouts of America (BSA) held an inauguration ceremony for the women who reached this prestigious rank on February 8, the organization’s 111th anniversary.

“In earning the rank of Eagle Scout, young people gain new skills, learn to overcome obstacles, and demonstrate leadership among their peers and in their communities,” a statement from BSA sent to CNN read. “These benefits are invaluable, and we are elated that they are now available to both young men and young women.”

It isn’t easy to become an Eagle Scout

Becoming an Eagle Scout is a rigorous process. A candidate has to earn 21 merit badges varying in subject from first aid to business, assume leadership roles and execute a large community service project. All of this has to be done before turning 18.

Because of the difficult requirements, only 6% of Boy Scouts become Eagle Scouts, BSA told CNN.

Girls were first allowed to join BSA in February 2019. There are currently about 140,000 girls in Cub Scouts and Scouts BSA, BSA told CNN.

Since girls were only allowed into the organization in 2019, some like Maine resident Mia Durbin, who turned 18 on January 3, faced a time crunch. She noted older girls in the organization had to “have a plan” to finish as quickly as possible, though some received time extensions due to the pandemic.

Being in BSA was “kind of in the family,” Durbin said. Her dad and uncles were Eagle Scouts, and her grandfather was their scoutmaster. Like Johnston, she had attended BSA events with her siblings growing up.

Earning badges and completing projects became difficult as the Covid-19 pandemic limited in-person activities. Some tailored their projects to help others during the pandemic: Johnson organized a food and donation drive for the New Hampshire Human Society, Durbin donated 201 care packages with masks and hand sanitizer to local homeless shelters and 17-year-old Ysa Duenas from Chesapeake, Virginia, made foot-operated sanitization machines for her local YMCA.

“I was trying to just make sure that I’m doing my part to help keep the community safe,” Duenas said.

Aside from completing difficult tasks in a constrained timeline, the girls in this class faced a key barrier: being among the first female Scouts in BSA. Lauren Krimm, a 19-year-old from Maryland, recalled facing pushback from peers who questioned why she would want to join BSA as a girl.

The most hurtful comments, she said, came from other girls.

“I had to forge the path, I had to clear the way and prove that we can do it and that we are going, they, no matter how hard others push back, we’re gonna keep moving forward,” Krimm said. “Of all the people who I thought would have given me backlash, that was the last group of people I expected.”

Durbin said she too faced criticism, recalling an instance when she was 14 when parents questioned why a girl was a staff member at Boy Scout camps.

Duenas noted that upon joining BSA, she was elated at the prospect of spending more time with her male friends. This excitement was short-lived, however, as she said the boys “didn’t want me there.”

She instead found camaraderie with other girls in her troop.

“It was a little heartbreaking, but it really fueled me because I was like, ‘Well, if you don’t want me here, that’s fine, but I’m going to do the same thing you’re doing but better,'” Duenas said. “Being able to have that community of, you know, strong independent women who were able to drive themselves empowered me.”

And they hope to encourage other girls to follow them

Cooking abilities, time management and improved communication are just some of the lessons from BSA the female Scouts said they’ll carry with them going forward. Along with these skills comes the prospect that other girls will be able to follow in their footsteps.

“If you have the ability to join, join and work your hardest at it,” Johnston said. “It won’t always be easy, you might face some resistance, but I really hope that that gets easier for future girls.”

“Not everyone is going to be super excited about everything that you want to accomplish in life, but you don’t need to pay any mind to people who are telling you that you can’t do something or that you shouldn’t,” Durbin said.

While they hope their achievements encourage younger girls, these women said the most memorable and enjoyable parts of becoming Eagle Scouts didn’t come from being the first.

Instead, they’ll remember the hard work involved and the community they found through being a part of BSA.

“I didn’t do it so I could be on TV and I could get interviewed and go down in history. I did it because it’s something I’ve always wanted to do, something that I knew I’d be proud of and that nobody can ever take away from me,” Krimm said.

“Every girl and boy who would use Eagle Scout worked hard for it. There is no difference, except for when we got to be able to do it.”

Coronavirus: What’s happening in Canada and around the world on Monday