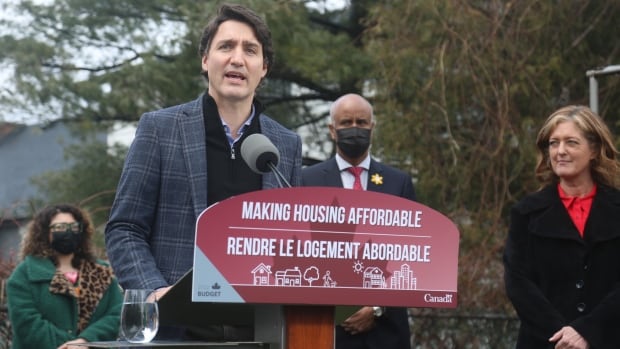 And a local MP says Hamilton will provide key input into how some of that housing plan plays out.

The visit comes a day after Freeland announced a budget that included a $10-billion investing in housing — much of it focused on boosting the supply of homes.

When asked how the government will make finding an affordable place to live possible, as expensive homes go up in new subdivisions and the cost of older housing stock in cities like Hamilton refuses to drop, Freeland pointed to the need for supply.

“The most fundamental fact is our population is growing faster than our supply of housing. It’s just a problem of numbers and of math,” she said from a local backyard.

“It’s great that we are a growing country, but in order to be a country that grows in a healthy, sustainable way, we just have to build more homes. At its heart, that’s what this plan is about.”

Trudeau said he came to Hamilton to speak on the issue because “it’s a great example of a place that used to be known for a level of affordability that is now stunningly out of reach.”

Of the money allocated in the budget, $4 billion is for a new “housing accelerator fund,” which will allow municipalities to slash red tape and speed up housing developments. The government estimates this program will create 100,000 new units over the next five years.

Denise Christopherson, CEO of YWCA Hamilton, said that while the investment in housing is positive overall, it will take time for units to be built.

Supports are needed now for people who are homeless, near homeless or dealing with renovictions, she said.

Christopherson said she would have also liked to see more money in the budget allocated to the national action plan to end gender-based violence.

“We’re glad it’s moving forward, but we know the level of supports and investments needed,” she said. “They committed millions. We would have liked to have seen billions.”

Chad Collins, Liberal MP for Hamilton East-Stoney Creek, says Hamilton officials who deal with planning and housing will present at a parliamentary committee next month to explain the city’s needs.

“I’m very interested in this one because there are no parameters yet around how it will be invested,” said Collins, a former city councillor and past president of CityHousing Hamilton. “There are suggestions.”

“I want to see us get at that affordable housing wait list. That’s at about 6,000 households [in Hamilton] and trending in the wrong direction.”

Figures from the Realtors Association of Hamilton-Burlington (RAHB) show the average sale price for a residential property here in February was $1,104,163 — a record high.

Dan Muys, Conservative MP for Flamborough-Glanbrook, says the Liberal budget doesn’t do enough to help with that.

“We need 110,000 homes in Hamilton, of all shapes and sizes, just to keep pace with demand,” he said ahead of Trudeau’s Hamilton visit.

Housing affordability is a key focus for the Liberals in their 2022 federal budget, with promises of a ban on some foreign buyers for two years and billions of dollars to help first-time home buyers get into the market. 2:22

Knocking on doors, “I heard it from their parents. ‘My daughter and her husband make well over six figures and they can’t even contemplate buying a home.'”

“Housing supply is the problem and this budget does not address that … None of these things are enough.”

Without significant change, Muys said, “this isn’t sustainable. Until we have more supply, we need to be firing on all cylinders.”

Graham Cubitt is director of projects and development at Indwell, one of the area’s largest social housing providers. He sees the budget as “good news for Hamilton.”

“There are a lot of projects ready to go in Hamilton, and this will make a big difference,” he said.

Another 1,000 units in progress would likely be eligible for co-investment funds mentioned in the budget, he said.

Mike Collins-Williams, CEO of the West End Homebuilders Association, says home builders have been calling for all levels of government to work together.

“With measures in this budget, this leadership is being established,” he said.

“Municipalities hold the key to unlocking more supply, and with this federal support and incentive, [the association] is hopeful more municipalities such as Hamilton and Burlington will move aggressively to help solve the housing supply shortage and alleviate the housing crisis.”

He said affordability is top of mind for families in Hamilton, adding getting into the housing market is “pretty much impossible” right now.

The home Trudeau stopped at was about 1,000-1,500 square feet, said the councillor, but most developers are building houses double that size now.

“That’s part of the problem,” said Danko, especially for people working in sectors such as manufacturing or the trades.

“Those kinds of jobs Hamilton is known for, those are the kinds of people who are priced out of the market right now.”