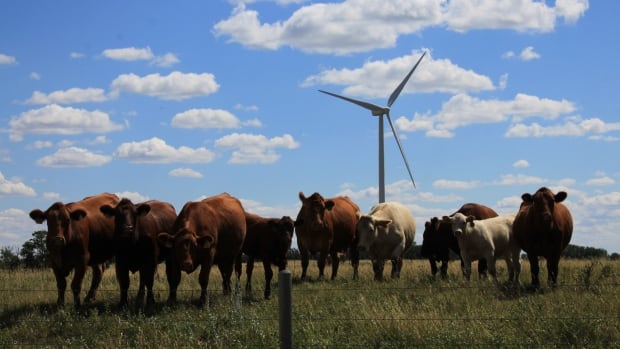 Farmers skeptical of wind turbines, but more accepting of certain proposals, U of A study shows


New research from the University of Alberta sheds light on how agricultural landowners in Alberta view wind turbine proposals on their land.

Between December of 2018 and March of 2019, 401 large-scale agricultural landowners from across Alberta participated in an online survey that asked them to rate six hypothetical scenarios about wind farm developments.

The research team’s findings, which were published online late last month in the peer-reviewed journal Land Economics, suggest relatively low levels of support for wind power (compared to other energy forms) but increased acceptance of certain types of development proposals.

“The experiment that we did suggests that if we have more fairness in the process in terms of inclusion, transparency and compensation, and if we have different ownership structures like local ownership, that can lead to more support for these wind farms,” said John Parkins, a professor in the U of A’s resource economics and environmental sociology department.

Parkins, who was the study’s lead author, said he and his colleagues wanted to understand how farmers who are in the position to host turbines on their land think about different development proposals.

Knowing that wind development can be controversial, the researchers wanted to know how developments could be designed to win more people over.

Wind capacity has been growing over the past decade in Alberta. Capacity doubled between 2010 and 2017 and is expected to double again by 2023, but further growth depends on buy-in from private rural landowners.

Those landowners, according to the U of A study, are less supportive of wind power compared to other energy sources.

Ninety-two per cent of respondents said they supported oil as an energy source, compared to 57 per cent supporting wind.

Compared to the team’s previous survey of the general population, concerns about climate change among the landowners were also relatively low. Sixty-two per cent of landowners said they agreed or strongly agreed with the statement “we still do not know for sure whether climate change is real or caused by humans.”

Less than a third of landowners said they agreed that adopting renewable energy would help reduce the impacts of climate change.

By analyzing how respondents rated different scenarios, the researchers learned landowners were more accepting of wind farm proposals if neighbours were compensated financially, if developments were locally owned and if the community was involved in the development process.

“Landowners are seeking mechanisms that make the development fair, not just to themselves, but their community and their environment,” said U of A professor Sven Anders, who was also involved in the study.

Anders said oil companies seeking to drill wells on someone else’s land follow a fairly rigid regulatory process, which farmers understand and trust, but the wind development industry doesn’t have a similar set of rules.

He said, anecdotally, some land agents have been signing farmers into contracts that give developers decades of exclusive rights to develop their land for wind and ask them to sign non-disclosure agreements, meaning they cannot talk about their contracts with neighbours.

Three farmers with land in the region told CBC News they have concerns about noise, shadow flicker, reclamation and the environmental effects of turbines, but also the way in which the project has pitted neighbours against each other.

“We’d like to see developers work toward building a community as opposed to dividing it,” said farm owner Dwayne Felzien.

“You drive down the country road and people aren’t waving at each other anymore,” said Barry Jackson, another farm owner who opposes the project.

Like some of his neighbours, Brian Perreault is skeptical about the economics of wind power and not interested in having turbines on his land, but he said a standardized process similar to the one used in the oil industry could build trust with farmers.

He said farmers opposed to turbines are seeking fairness above all else and feel as if they are living in the “wild west.”

Parkins said the relationship between landowners and turbine owners can be cold and distant in Alberta because large-scale wind farms can often change hands, with one company developing a site, then selling it off.

Since his team’s research indicates locally owned projects would be more likely to be accepted, he said there is an opportunity for more municipalities and cooperatives to develop wind farms.

Private companies trying to win farmers over should focus on fairness, transparency and community consultation, he said.