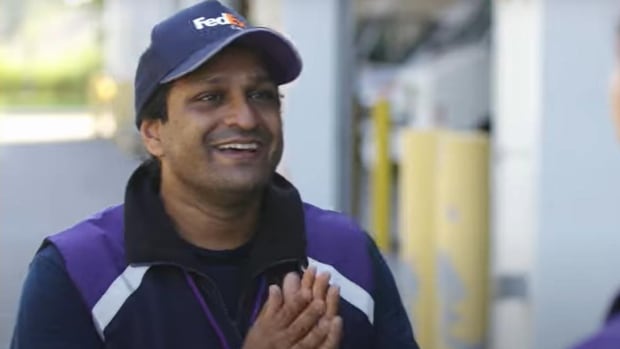 Family of Toronto man who fell to his death says police locked them in room, didn’t let them speak to him


Family members of a man who fell to his death from a west-end Toronto highrise earlier this month say they pleaded with police to be allowed to speak to him, but were instead made to wait in a locked superintendent’s office during the final hours of Taresh Bobby Ramroop’s life.

Through tears and grief, family and friends of Ramroop gathered Thursday, steps away from where their loved one died on Oct. 13, demanding police be held accountable for his death.

What he needed that day, they say, was not a police response but rather mental health help.

No such help arrived, they allege.

“Instead, the police staged an hours-long standoff which ended after Taresh tried to escape from a window,” organizers said in a news release, before falling to his death from the 16th floor.

Ontario’s police watchdog is investigating the circumstances of Ramroop’s death.

The Special Investigations Unit has said Toronto police were called to an apartment in the Jane and Finch neighbourhood around 4:30 p.m. for reports of a man “throwing objects” off a balcony.

The SIU says it has designated nine witness officials, three of whom have been interviewed. Two civilian witnesses have also been interviewed and a post-mortem exam was held Oct. 15.

However, it says no subject officials have been designated to date — meaning officers whose conduct is under investigation.

Asked if that means the SIU is not investigating the conduct of any officers, the agency said it “is currently considering its options with respect to a subject official designation.”

Preliminary information suggested three officers attempted to negotiate with the man before three more officers from the Emergency Task Force arrived to speak with him “from an adjoining apartment,” the SIU has said.

“In the course of negotiations, the man fell from the apartment window to the ground below.”

Toronto police initially declined to answer questions about the case, however a spokesperson for Chief James Ramer issued a statement late Thursday afternoon, saying police responded to multiple 911 calls around 4:36 p.m. after callers reported seeing furniture, including an air conditioning unit, thrown from an apartment, landing near a street-level daycare.

Ramroop had “barricaded himself inside a room” when officers entered, requiring “a higher level of response according to procedure,” the statement from spokesperson Allison Sparkes reads.

“Given the elevated risk of harm … this was not an incident where the MCIT would be deployed to attend the scene,” the statement says, referring to mobile crisis intervention teams.

“At no time was there any confrontation, a ‘stand-off’ or physical contact between the officers and the man,” the statement adds.

Among the ETF officers who arrived with tactical paramedics at about 5:30 p.m., the statement says two were certified crisis negotiators and a psychiatrist had been called but did not arrive in time.

The Toronto Police Service’s website describes the ETF as responding to “high-risk emergency situations, search warrant execution, armed/barricaded persons and acts of terrorism.” However, in its statement, the service describes the ETF as is “a multi-faceted” unit that includes officers trained in negotiations, de-escalation and effectively working with persons in crisis.

‘They kept us locked in the room,’ says family

The statement did not indicate how many officers were present, but family members say they and other witnesses saw approximately 20 officers in total.

“Bobby” as he was known to many of his loved ones, loved graphic design, singing and carried a smile with him wherever he went, his sister Vanessa Persaud told reporters. He also suffered from severe depression, she said.

On the day of his death, he had texted both of his parents to say he needed help but his family says he did not want to end his life. He worked two jobs, wanted to help support his family and would be turning 33 on Nov. 1.

“He told many people his birthday was coming up,” Persaud said, adding he did not deserve the ending.

“If our loved one needed help, the last thing we would have done is call Toronto police,” she said.

Around 2:30 p.m. that day, Ramroop’s mother received a text message from him saying it sounded like someone was trying to break in. It’s unclear what the noise was.

When police arrived, Ramroop’s brother was told to leave the apartment, while police proceeded to Ramroop’s room.

When his mother arrived home, she saw roughly 10 officers, Persaud said. One physically pushed her back and told her not to enter the building. She did anyway and was made to go into the superintendent’s office and wait, said Persaud.

Police told her Ramroop was going through psychosis and that they were going to bring help. Soon after, Persaud and her father arrived, seeing what they estimate to be 20 officers, and were also made to wait in the locked office.

“For six hours, they kept us locked in the room,” she said, where they were unable to communicate with their loved one.

“Bobby was unarmed, he had no drugs on him,” Persaud said. “We will never understand why these weapons, tactics or officers were necessary when we as a family did not place this call for police.”

Moreover, the family says they were told a doctor would be arriving to treat Ramroop, yet at no time did they see one arrive before he died.

Instead they say their loved one’s body lay on the ground for several hours after he died. The family meanwhile was left in the dark, they say, with police not informing them he was dead until about six hours later.

The case appears to bear some similarities to the death of Regis Korchinski-Paquet, who in May of 2020, fell from her 24th-floor apartment balcony after her mother called 911 saying her daughter needed help. The SIU later cleared the five officers involved that day of wrongdoing, saying while their efforts to de-escalate the situation were unsuccessful, none broke the law.

In the wake of Korchinski-Paquet’s death, then-police chief Mark Saunders told the media police received three 911 calls for an assault, two of which referenced a knife.

As a result, he said, police did not dispatch a mobile crisis intervention team to the scene, with Saunders saying: “There’s no way I would put a nurse in the middle of a knife fight.”

Neither police nor the SIU mention a weapon in Ramroop’s case.

Toronto police receive about 33,000 mental health calls a year. But as CBC News has previously reported, at least one advocate says not enough such calls are being referred to crisis workers.

While Ramroop’s loss has left his family shattered, with their grief also come key demands for action.

The family is calling for the release of all police bodycam footage from the incident, voice recordings and the names of the officers involved. They are also calling for the abolishment of Toronto police, which they say should be replaced with an “appropriate and caring emergency response.”

Toronto police say they are  “fully cooperating” with the SIU’s investigation and have shared all video and audio recordings as well as other information requested by the watchdog body.

Those calls were echoed by Jane Finch Action Against Poverty organizer Butterfly Sabrina Gopaul, who called Ramroop’s death a tragedy that could have been prevented and said police cannot be allowed to deal with cases of people in crisis.

“Instead of putting access to internet and services, the police and governments have put in CCTV camers in our communities,” Gopaul said.

Toronto has faced growing calls to reduce the city’s more than $1-billion police budget in recent years. The last city council, led by Mayor John Tory, rejected those calls twice, instead voting to maintain or increase the amount of money going to TPS despite efforts by some councillors to force a reduction.

In an online obituary, Ramroop’s mother writes that he was born in Guyana, was beloved by his parents and was a brother to four siblings. Ramroop immigrated to Canada in 1993 and will be missed by family and friends both here and abroad, she writes.

“If love alone could [have] saved you, you would [have] never died,” the obituary says. “We thank God he made you…”