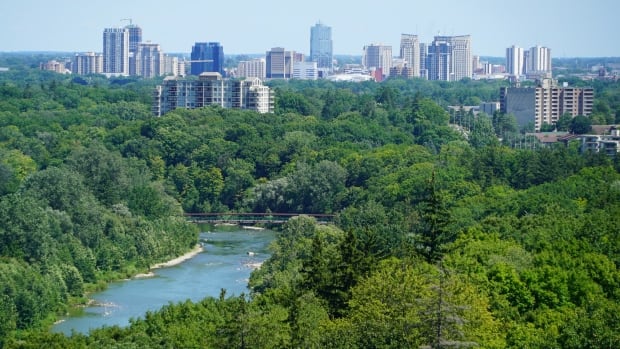 
She was hesitant at first, but since Betsy Tevlin and her husband Sean made the decision to leave Toronto for London with their two young children in 2016, they’ve had no regrets.

“We just thought that it was beneficial to raise children in London for variety of reasons,” she said. “I’m much happier here.”

Part of the reason, said the 36-year-old political marketing consultant, is that their family budget goes much further in London, compared to Toronto.

“I’m more than happy these days with everything we’ve been able to attain since we came here,” she said. “Not just housing, but to be able to go on vacation again because we don’t have to pay daycare fees.”

? Yesterday, I posted this chart showing how the City of Toronto is quickly becoming a place with no young children. Someone asked if this applied to other age groups… <a href=”https://t.co/Ci2rf78Jd2″>pic.twitter.com/Ci2rf78Jd2</a>

The Tevlins are just one example of the tens of thousands of families that have left Toronto in favour of the quality-of-life offered elsewhere.

“A lot of the housing that’s been built in Toronto for the last couple decades has been luxury bachelor condos,” he said, adding that couples will often happily live in those condos, until they have children.

“They realize ‘this ain’t going to work’ and they’re getting in a car and finding somewhere else to live and often times that’s in London.”

60,000 people leave Toronto and Peel each year for SW Ont.

Moffatt said in 2019, the year before the pandemic, up to 60,000 people left Toronto and Peel Region, a quarter of them children under five and the rest between the ages of 28 and 40, many of them settling in London.

Outlying communities, such as Woodstock, Tilsonburg and St. Thomas are seeing similar patterns, but none are growing faster than Lucan-Biddulph, a town north of London that grew by 20 per cent due to the GTA outflow.

“Lucan-Biddulph is one of the fastest-growing communities in Canada and that’s a fantastic thing for these communities, it’s revitalizing a lot of main streets in smaller communities.”

This is bananas – how much home price dynamics in SW Ontario differ from the rest of the country. <a href=”https://t.co/LU2hxvz3B6″>pic.twitter.com/LU2hxvz3B6</a>

Moffatt said such robust growth is creating infrastructure needs in the southwest. With the large influx of children, some schools in northwest London are bursting at the seams, while similar schools in Toronto are underused, including Drake’s former high school, resulting in millions spent on empty classrooms.

At the same time, real estate prices more than doubled in London due to the influx in the last five years, with the average price hitting $823,000 in the region last month.