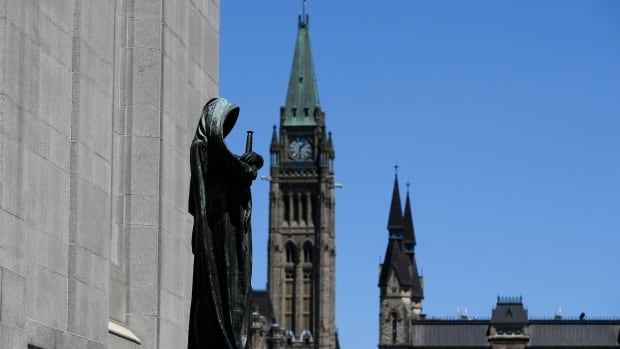 
Families of murder victims went before a committee of MPs on Thursday to condemn a controversial Supreme Court of Canada decision on sentencing law.

In May, all nine justices on Canada’s top court overturned a 2011 Criminal Code provision that allowed judges to impose parole ineligibility periods of 25 years to be served consecutively for each murder, rather than concurrently.

Sharlene Bosma’s husband Tim was killed in 2013. She told the MPs on the justice committee that the provision for consecutive parole periods was one of a “few things that we as victims had to hold onto.”

“It says to us that you can kill as many people as you want here in Canada because sentencing will not change,” Bosma told the committee.

Sharlene Bosma told the committee she has been fighting to ensure that her husband’s murderer is not released because of what she says is a lack of legal safeguards surrounding convicted felons in Canada.

Tim Bosma’s killers were hit with multiple 25-year parole ineligibility periods after being found guilty of multiple murders. Sharlene Bosma said the sentencing came as a relief because she believed it would mean that her daughter, who was two at the time of her father’s death, would never have to face his killers.

“She had the right to be raised by him and know him for the loving man that he was,” she said, fighting back tears.

“Now, because of the ruling in May, when my daughter is 27 she will be asked to carry on the fight that I thought I already fought for her. The parole hearings will begin.”

Mike and Dianne Ilesic, whose son Brian was shot and killed along with two others in an ATM robbery in June 2012, told the MPs the Supreme Court’s decision should be overturned by the government with the rarely-used notwithstanding clause.

“I’m mystified and terribly disappointed by the Supreme Court’s decision and the government’s lack of response,” Dianne Ilesic told the committee.

Their son’s murderer was sentenced to life in prison with no chance of parole for 40 years, but has applied to be eligible for parole in 25 years following the Supreme Court’s ruling.

Mike Ilesic said he also worries about passing on the responsibility for attending parole hearings to his remaining sons.

“They’re kind of not willing to do that because they don’t have any faith in the way the current justice system is going,” he said.

The justice committee is conducting a study of the government’s obligations to victims of crime.

The committee also heard testimony from Morrell Andrews, a sexual assault victim who has been advocating for changes to Canada’s publication ban rules.

Andrews told the committee that a publication ban was placed on her name without her consent and she later had to fight to remove it — a process she said was “humiliating.”

“They said this ban was in my best interest but I felt trapped,” she said, arguing that she should have had the right to speak about her experience publicly.

Morell suggested that the law be amended to ensure more information is provided to victims about how publication bans work, and to provide an opportunity for victims to waive the ban.

The committee later heard from Hamed Esmaeilion, president of the Association of Families of Flight PS752 Victims.

Esmaeilion called on Ottawa to add the Iranian Revolutionary Guard Corps (IRGC) to Canada’s list of terrorist organizations over its role in shooting down the plane two years ago.

“This is an entity that shoots at innocent people, so if you’re serious about justice and about this case … putting IRGC on the list is one of the basic steps that our government can take,” he said.

WATCH | Calls mount for Canada to list Iran’s IRGC as a terrorist entity:

Hamed Esmaeilion says Canada should “listen to the victims” of the Iranian regime and list the IRGC as a terrorist entity: “It’s about 43 years of crimes…We’ve lost 85 Canadians because of the shooting down of Flight PS752. We’ve lost Zahra Kazemi and Kavous Seyed-Emami.”