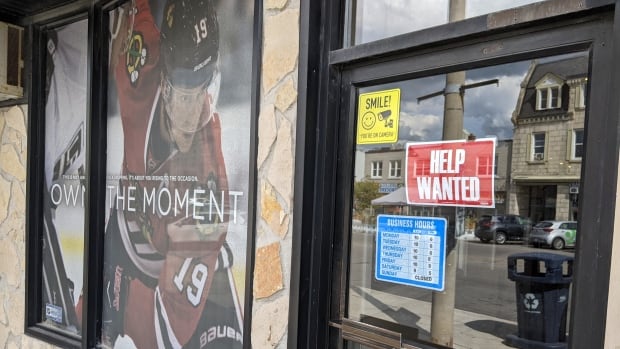 
If you listen to the right group of top economists representing business, labour and global finance, you might decide that central banks are crazy to keep on raising interest rates.

But on Thursday, in the face of that chorus of criticism, Bank of Canada governor Tiff Macklem insisted that despite a “narrow path” to the kind of soft landing that would avoid recession, interest rates must go higher still.

And while global price jumps helped get the inflation ball rolling, he said that Canada’s persistent demand for workers is just one sign that rising prices are now homegrown — and that an overheated economy must be cooled with more domestic rate hikes.

“We do think further interest rate increases are warranted to get inflation all the way back down to target,” Macklem told Canadian financial reporters Thursday after a speech to the Halifax Chamber of Commerce.

Not only that but as the Canadian dollar falls against other world currencies, Macklem said there could be pressure to raise interest rates even more than when the loonie was holding its own against the U.S. dollar.

Exactly how much of a raise was needed, well, Macklem wouldn’t speculate.

But on Wednesday, BMO economist Sal Guatieri said the U.S. Fed would likely raise rates 1.5 percentage points and the Bank of Canada would hike rates by three-quarters of a percentage point “in the months ahead.”

As one reporter remarked at the Thursday news conference, such sharp rate increases mean central bankers around the world are being accused of making things worse.

Those kinds of accusations are not hard to find. From the United Nations, to market analysts, to people in the real estate industry and those worried about the welfare of Canadian workers, many see the current burst of rate hikes — in which the Bank of Canada has moved the fastest so far— as being a problem rather than a solution.

LISTEN | Macklem on where he hopes to steer the economy:

Cost of Living13:18Tiff Macklem’s challenging, inflation-fighting not so great year

As the Governor of the Bank of Canada, Tiff Macklem is dedicated to cooling off inflation. He’s raised interest rates at a faster clip than other G7 countries, and there are signs it may be starting to work. But could the tactic also tip us into a recession? Paul Haavardsrud asks Tiff Macklem if there’s still a chance to steer the good ship Economy in for a soft landing.

The issue, of course, is that Canada is not acting alone. As Macklem said on Tuesday, the flexible exchange rate mechanism “gives us the ability to run an independent monetary policy that is geared to the needs of Canada.”

But a report from the United Nations Conference on Trade and Development this week warned that the world’s richer countries must think of the effects beyond their own borders. Because in thinking only of themselves, these countries risk creating a global recession that would cause “worse damage than the financial crisis of 2008 and the COVID-19 shock in 2020,” the report suggests.

And still many other critics have expressed concerns that jarring swings in financial markets could yet cause some sort of disruptive financial crisis that would then compound the effects on the world’s more vulnerable countries and hurt richer countries too. Rather than the “black swan” — a past reference to unusual market events — one critic described current market instability as a “neon swan,” signalling a market accident waiting to happen.

This week the International Monetary Fund (IMF) noted that, while banks are much sounder than they were before the 2008 financial crisis, some of the instabilities that used to be present in banking can now be found in other financial institutions. For example, the IMF warned that investment funds holding increasingly difficult-to-unload assets could “amplify stress in asset markets.”

As the Economist magazine cautioned this week, rising rates will likely be effective in breaking the back of inflation, but it could mean cracks may well appear elsewhere. “It is not hard to feel a sense of foreboding,” said the magazine.

Other financial publications, including Fortune and CNBC, rolled out their duelling “top economists” to describe why central banks are “incompetent” or would create “unbelievable calamities” if they keep hiking.

This week there were new signs from Vancouver and Toronto that the Canadian housing market was on a downward path, and I ran across an ominous IMF quote in one of my columns from 10 years ago: “When house prices rise because households gorge themselves with debt … the ensuing recession is much deeper and more protracted than busts not preceded by such debt accumulation.”

Bad for workers too?

Obviously many who hold assets like stocks and real estate find fault with the central banks, but well-known labour economist Jim Stanford, director of the Vancouver-based Centre for Future Work, wrote a detailed critique after testifying to Canada’s Senate committee on banking, commerce and the economy.

“It’s not inflation but rather the response to inflation that is now threatening another economic crisis,” wrote Stanford, offering alternative solutions of his own.

While it may seem that the Bank of Canada is simply refusing to listen to alternative ideas, Macklem said he was pleased to hear analysis and criticism. But Macklem is constrained by his tools and his mandate from Parliament, which is to get inflation down to the bank’s two per cent inflation range.

And Macklem is by no means the odd man out. Jerome Powell at the Federal Reserve is on the same page, and despite all the economic critiques there are many other top economists who support Macklem’s view.

Clearly not everyone agrees with that strategy. But as Macklem said Thursday, he is convinced that failing to slap down inflation quickly will create the kind of psychology we have seen in previous periods of inflation, where everyone decides price and wage increases at five or seven per cent are the normal thing.

In that case he said, “We will have to set interest rate targets considerably higher. We will need a much more marked slowing in the economy.”

If Macklem is right and that were to happen, the danger is that all the concerns expressed by critics listed above would still occur. They would just come later, last longer and be worse.

“Inflation is a burden on all Canadians,” said Macklem. “We are determined to get it back down to two per cent.”