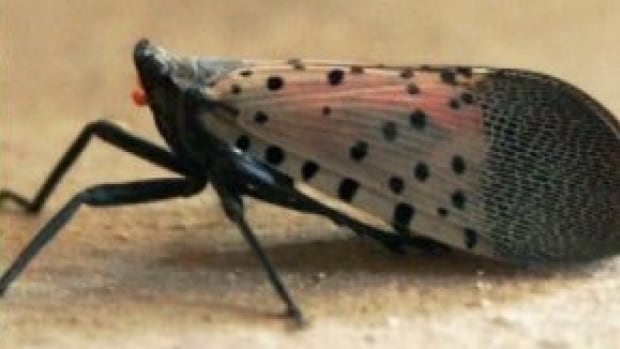 
Essex region wineries are on edge and on the lookout for an invasive species that has made its way into Michigan wreaking havoc on U.S. grape crops.

The Spotted Lanternfly, which originated in Asia, kills plants by sucking sap from leaves and stems. The bug is described as grey with black spots when its wings are closed. It feeds on 70 species of trees and plants, including apple and grape.

They were discovered in Pennsylvania in 2014. According to media reports in the U.S., there have been infestations of the bug detected in 12 states. Officials in New York are asking for $22 million dollars in federal funding to deal with the bug.

“So far there’s no silver bullet for protection or eradication, so we’re a little bit anxious about this one,” Wolters said.

It has yet to be spotted in Canada but has been recently seen in Pontiac, Michigan, near Niagara, Ont., just last week. It’s raising the alarm level on vineyards in our country.

“It’s as much wine as well the quality of the wine so we’re able to make some pretty fantastic grapes here, but if we can’t get it to full maturity with the appropriate amount of sugar, we can’t make good wine,” Wolters said.

Leslie Balsillie is helping with a monitoring program funded in part by the Ministry of of Agriculture, Food and Rural Affairs to set up traps and posters in places like Pelee Island and the Windsor harbour.

“We just want to find it when it first arrives. It’s going to come,” Balsillie said.

“If you don’t look, you don’t know what you have and with some of the other invasive insects that we didn’t know we needed to look for then by the time you see so much damage… they’ve caused huge losses for the areas that are affected.”

Balsillie said there are more than 70 sites where traps are set in Ontario between Windsor and Niagara and all the way to Ottawa and the Toronto area.

“They’re focusing on… transportation corridors that transportation trucks come in and they park and sit, recreational vehicles, so some of the parks,” Balsillie said.

Researchers say early detection is key to keeping the potential for infestation under control.

“When we have early detection, we have the most tools in our toolbox,” said Mike Philip, an entomologist with the Michigan Department of Agriculture and Rural Development.

Know what it looks like, keep an eye out for it and absolutely report it when you see it.– Mike Philip, entomologist with the Michigan Department of Agriculture and Rural Development

Phillip said action they are taking since the Michigan spotting should prevent it from spreading in the short-term but because of its strong hold on the Eastern United States, in the long run, the likelihood of a Canadian appearance is quite high.

“It’s such an excellent hitchhiker, it is hard to stop it from moving in somebody’s car or it can lay its eggs on a trailer,” Phillip said.

Anyone who spots the bug is being asked to report it to the Invasive Species Centre or the Canadian Food Inspection Agency.

“Know what it looks like, keep an eye out for it and absolutely report it when you see it,” Phillip said. “If you see it, squish it [and] take a picture of it.”

Women from around the world descend on Antigonish for leadership lessons