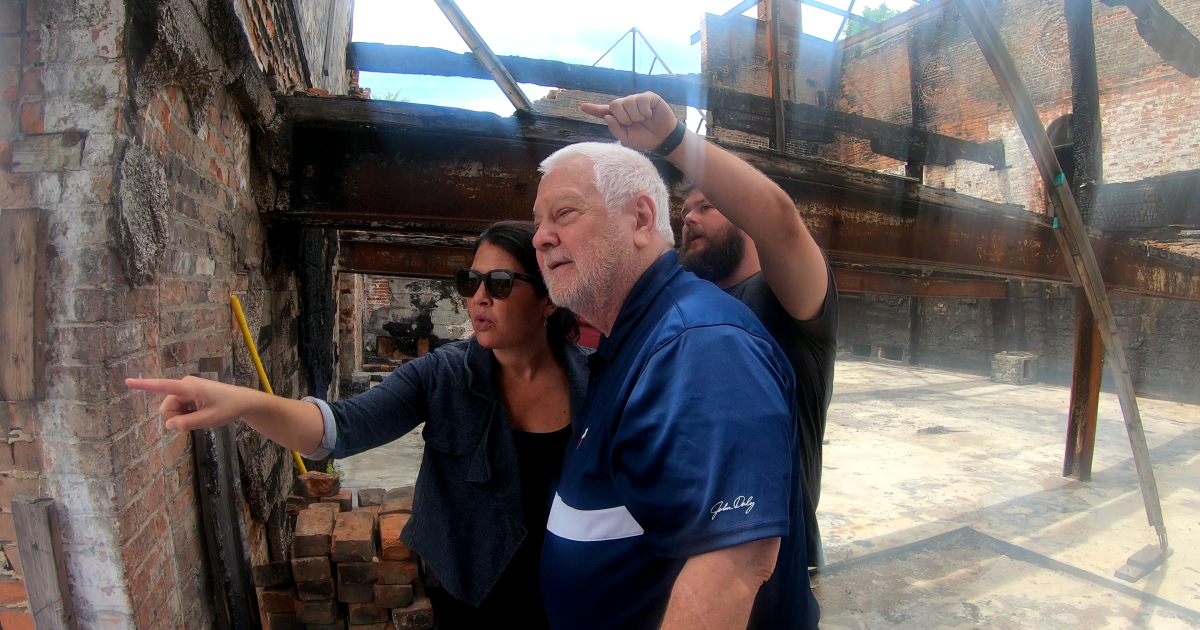 
CINCINNATI — John Richardson climbs rickety stairs to catch the city views from Jackson Brewery, its rusty beams buckled and roof destroyed by fire in 2019. The Indian Hill resident paid $1.5 million for the long-dormant property in March.

“It’s an incredibly strong building,” said Richardson, chairman of SugarCreek, a food-processing company based in Washington Courthouse. “I think the building’s been through a lot of drama and hardship but it’s kind of – not unlike myself – still standing. So, mostly I see potential.”

Hamilton County records show a corporate affiliate of SugarCreek paid $3.8 million since last September for 40 OTR properties, including seven parcels where breweries thrived in the 1800s. Richardson plans to invest more than $30 million to restore the buildings and revive some of Cincinnati’s most iconic beer brands in the process. Separate from the real estate purchase, Richards also bought Cincinnati Beverage Co., whose portfolio of brands includes Moerlein, Little Kings, Hudepohl and Burger beers.

His Over-the-Rhine investments are the latest in a lifetime of restoration projects for Richardson, who brought new life to cars, boats, furniture, buildings and companies while growing the family business into a billion-dollar enterprise in the last 32 years.

“It’s the thrill of taking something that’s been discarded or basically thrown away or overlooked and bringing it back,” Richardson said. “Particularly if there’s a story attached to it that’s worth being told. It’s incredibly rewarding.”

Richardson brings a new dynamic to the Mohawk section of Over-the-Rhine, where real estate investors have been long on dreams but short on cash, said local historian Mike Morgan.

“SugarCreek appears to have all kinds of capital at its disposal and that always makes a difference,” said Morgan, author of “Cincinnati Beer” and “Over-the-Rhine: When Beer was King.”

Morgan said developers have long recognized the potential of re-using buildings that once turned out 200,000 barrels of beer each year on behalf of breweries named Hamilton, Sohn, Klotter, Mohawk, Clyffside and Jackson – after President Andrew Jackson, whom the brewery’s owners supported.

Past ideas that lacked financing have included new breweries, hotels, bars and restaurants for the landmark structures, even an aerial tram that would link the Mohawk site to Bellevue Hill Park. But Morgan is impressed that Richardson started his ownership by hiring Structural Systems Repair Group to stabilize the buildings.

“The fact that they’re starting with the smokestack is very heartening,” Morgan said. “Most developers would have sought a demolition right out of the gate, but they’re doing the difficult things. They appear to be doing them out of the love of those spaces.”

Richardson is working with the Drawing Department, an Oakley-based architectural firm, to develop design concepts for buildings. It will likely include production facilities for beer and other alcoholic beverages, along with food offerings from SugarCreek. He expects the design process to take up to nine months, followed by several phases of construction.

“I can see this being a very different place, hopefully in five years, maybe 10,” Richardson said. “I don’t look for this to be quick and fast. It’s going to be a process. It’s going to take a while.”

While Cincinnati Beverage will operate separately from SugarCreek, the project will be managed by executives of both companies, including Richardson’s son, Michael, and daughter, Jennifer Hutcheson.

Michael Richardson, president of CinBev and SugarCreek, expects a cluster of businesses formed by the new venture to collectively generate about $50 million in annual revenue. Whether that comes from brewing, restaurants, rooftop bars or hotels is far from clear at this point.

“We want it obviously to be profitable and it will be,” he said. “But we don’t want to do something just for the sake of making money if it doesn’t fit with the overall vision of the space.”

CinBev currently outsources the production of its Moerlein, Little Kings and Hudy Delight brands, but Michael Richardson would like to bring that production in-house while reviving other brands.

“Personally, I like the potential of linking (the Clyffside Brewery building) to a Clyffside brand and Jackson to a Jackson brand,” he said. “But they all have something to offer.”

The goal is to stay true to the original beer recipes that made each brand famous but that could change with taste-testing and marketing evaluations, he said. A team of about a dozen SugarCreek employees with brewing experience will oversee the development of new products, which may include spirits other than beer.

“The spirit of what we’re trying to accomplish is to restore what once was,” he said. “If there’s an opportunity to riff and innovate and maybe improve it, of course we’ll look at that. But we like to revitalize things. That’s the goal.”

Hutcheson has been working with the Drawing Department to learn about the history of the buildings, the oldest of which dates back to the 1830s. The firm is known for historical renovations, including Taft’s Ale House and the Ghost Baby night club, located in an underground lagering tunnel beneath Vine Street.

“We think it’s very important to hang onto the essence of what those buildings are,” said Hutcheson, chief relationship manager for CinBev and SugarCreek. “The Drawing Department is very good at doing that.”

Jackson Brewery has two floors of lagering tunnels that Hutcheson toured with her father on their first visit to the Mohawk brewery complex last year. She is sure they will be repurposed in some form, but isn’t sure how.

“I remember we were actually in the tunnels and he looked at me and said, ‘Wow, what an opportunity to bring this place back to life. I think it’s something we need to do,’” she recalled.

John Richardson said he was drawn to Over-the-Rhine by SugarCreek employees who lived and worked in the neighborhood. He was intrigued by its historic buildings, which reminded him of European cities he has visited.

“There’s not too many cities left that have this kind of opportunity,” he said. “With the location and the elevation and the views, that’s kind of a no-brainer. But then when you dial in the history … I thought it lent itself to quite the story. And you know the story is always the fun part.”

A self-described “motor head,” Richardson said he got involved in restoration by working on cars with his dad, who started SugarCreek Packaging in 1966. Cars led to wooden speedboats, which led to furniture, then homes and commercial buildings.

“I’ve done businesses and buildings and equipment that go anywhere from $50 to $200-$300 million,” he said. “It’ll turn your hair white, but you just don’t give up. Just got to see it through and make it happen.”

That approach has obviously worked at SugarCreek, which was a $50 million bacon processor when Richardson took the helm but grew to $1 billion and more than 3,000 employees by the end of last year. Among its innovations was the implementation of a European cooking process known as sous vide, which expanded its offerings of ready-to-eat food products for its retail and food-service customers.

Sous vide cooking involves prepping and vacuum packing food so it can slow-cooked in a circulated water bath. SugarCreek acquired a 77,000-square-foot manufacturing plant in Cambridge City, Indiana 10 years ago. By 2016, it opened North America’s largest sous vide manufacturing facility on the site. The new products it develops there and at a new culinary center it’s now developing in Butler County could be showcased at its Mohawk brewery complex and used in restaurants, banquet facilities and an on-site hotel.

“The goal is to get in and grow it, be a great partner in the community,” Michael Richardson said. “Hopefully, it’ll be a place where we can showcase not only our beverages but our food and make it a destination for the folks in Cincinnati to enjoy.”

John Richardson is enjoying himself enough to have doubled down on his Mohawk investments. Records show he paid $350,000 on June 29 for 28 hillside properties one block west of Jackson Brewery.

“So far I’m having fun,” Richardson quipped of his Mohawk investments. “It hasn’t fallen down. So, we’re having fun, you bet.”

‘Could put him in jail’: Bold claim after Elon Musk’s Twitter fiasco