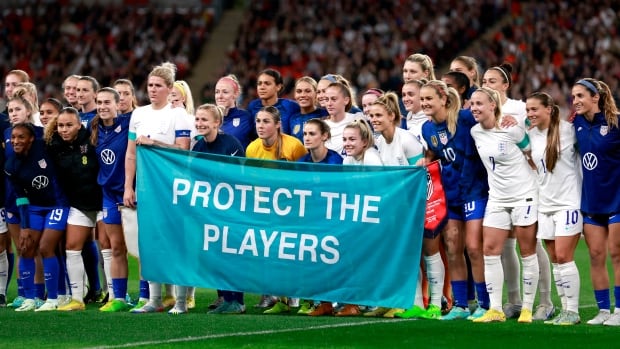 
Ten weeks after conquering Europe, England women proclaimed themselves ready for even more after beating the world champion United States 2-1 in a friendly at Wembley Stadium in London on Friday.

Lauren Hemp and Georgia Stanway scored to help England beat the U.S. for the first time since 2017 and less than 10 months before the Women’s World Cup in Australia and New Zealand.

England and the U.S. wore teal armbands in solidarity with sexual abuse victims and together held a banner that read “Protect the Players” just before kickoff.

A report this week into the scandals that erupted in the National Women’s Soccer League last season found emotional abuse and sexual misconduct were systemic in the league.

Protect the players.<br><br>We stand in solidarity with sexual abuse victims 🤝 <a href=”https://t.co/8FTBvnaXFe”>pic.twitter.com/8FTBvnaXFe</a>

There was also a moment of silence for the victims of the deadly crush of fans at a soccer match in Indonesia.

Stanway’s penalty in the 33rd minute put the hosts in front for good before 76,893 fans. Victory extended England’s unbeaten run to 23 games under coach Sarina Wiegman. England stopped the Americans’ 13-game winning streak and 21-match unbeaten streak dating to a 1-0 defeat to Canada in a 2021 Olympics semifinal.

“It was a great result,” Hemp told broadcaster ITV. “There’s a lot of preparation now for the World Cup. It’s important that we stay grounded.”

England, which won the European championship in late July, took the lead in the 10th when Beth Mead sent a low cross into the box. Defender Alana Cook tried to make a sliding block but the ball wiggled through to Hemp, who finished from close range.

The Americans equalized just before the half-hour mark. Millie Bright tried to pass out of the back to a tightly covered Stanway, and Lindsey Horan poked the ball forward to Sophia Smith, who turned and fired low to the left corner past a diving Mary Earps.

Stanway made amends from the spot, though, shooting the ball into the right corner as goalkeeper Alyssa Naeher went the wrong way.

Minutes later, the visitors thought they tied the game again but Trinity Rodman’s strike was ruled out for offside after a video review.

Forward Alyssa Thompson entered in the 84th minute and at 17 years, 334 days became the youngest to debut for the U.S. since Mallory Pugh in January 2016. Thompson was the 70th teenager to appear for the Americans.

Green Bay Packers quarterback Aaron Rodgers and wide receiver Allen Lazard were among the stars in attendance. The Packers play the New York Giants on Sunday in an NFL game at Tottenham Hotspur Stadium. “Ted Lasso” actor Jason Sudeikis was also on hand.

U.S. wing Crystal Dunn went on as a second-half substitute — less than five months after giving birth to her son. It was her 124th international appearance and first in nearly 13 months.

The draw for the World Cup will be in Auckland on Oct. 2