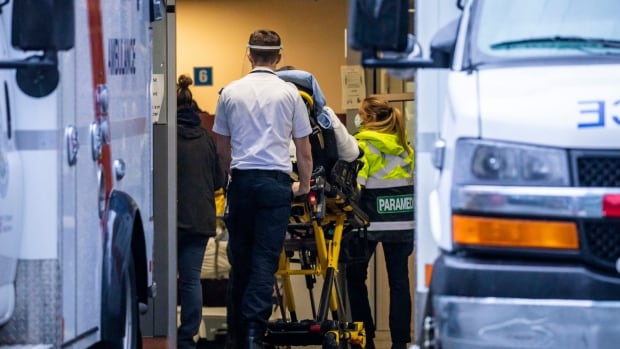 
Emergency rooms at 13 hospitals in rural British Columbia were closed for the equivalent of around four months in 2022, according to data analyzed by CBC News.

Only counting short-term closures — when notices are issued warning of diversions — 13 ERs serving communities with fewer than 10,000 people were closed down for a cumulative total of more than 2,900 hours.

That means residents in the affected communities lost more than 120 days of access to their local ER.

And the numbers don’t even reflect long-term closures that went into effect over the past year, including ongoing overnight closures and outright shutdowns in communities like Grand Forks.

Rural mayors say the closures will likely continue in 2023 if the province does not significantly invest in the health-care system and prioritize rural residents.

The closures have been attributed by the province to staff shortages, driven by waves of sick leaves and more lasting staff retention issues, as well as the spread of COVID-19 and high levels of respiratory illness.

The community most affected by short-term ER closures in the past year was Clearwater, a central Interior municipality with a little over 2,300 residents situated 120 kilometres north of Kamloops.

Its ER was closed 62 separate times, and it lost over a month in cumulative hours to closures.

Clearwater Mayor Merlin Blackwell says the struggles the community faced were not unique, adding that he has spoken to leaders in Grand Forks and Ashcroft about their health-care challenges.

“What’s tending to happen around the province right now is a change of service level. Instead of 24/7 care, the local health authority is tailoring their use to the number of staff they have,” he told CBC News.

CBC News first began verifying data related to closures in July, and looked at all hospitals in the province.

While short-term diversions and closures were a regular feature throughout the year in rural ERs, more lasting service reductions also went into effect.

New Denver Mayor Leonard Casley says the ER in the southern Interior community has been closed overnight since July.

He says the problems can be traced back to 2001, when the B.C. Liberal government of the time replaced the province’s 52 health authorities with five regional ones — Vancouver Coastal, Island, Interior, Fraser and Northern.

“I think a big part of it was the centralization of health-care,” he said. “[Health authorities] do OK in the big centres, but in rural B.C. — they do not understand rural B.C. at all.”

Both Blackwell and Casley say that centralization has caused bureaucratic logjams that are leading to rural ERs being deprived of front-line staff, and subsequent closures.

It’s an assertion that’s been floated elsewhere, particularly in the north Vancouver Island communities of Port Hardy and Port McNeill, where some doctors have asked for their ERs to be amalgamated in the short-term to prevent regular closures.

Casley says the closure of rural services can be particularly inequitable for retirees and seniors, who have to drive long distances, possibly at night, if they face a health emergency and their local ER is closed.

While the Dr. Helmcken Memorial Hospital in Clearwater saw the most closures this year, the situation improved following the Union of B.C. Municipalities meeting in September.

After a speech from Health Minister Adrian Dix that was panned by rural mayors, Blackwell says Dix went on to make changes and listened to the problems being faced in communities.

He also said Interior Health sent staff to do a complete evaluation of Clearwater’s hospital and helped create a more stable workplace, with more nurses.

“It’s a lot of work from Interior Health with a lot of lobbying from people like me,” he said. “It still is precarious … it can never be fast enough for the people on the ground, but the change is greatly appreciated.”

Casley is pushing for a decentralization of services and more power for rural B.C. communities to find staff and resources for their local hospitals — one of many mayors to do so this year.

“Instead of things being decided in Ottawa and in Victoria, they need to be decided on a local level,” he said.

A Health Ministry spokesperson said in a statement that B.C. wasn’t alone in facing COVID-19-related health-care pressures, and that the province was implementing a human resources strategy to reduce them.

“Health authorities continuously work to recruit across all their vacancies, particularly in rural and remote communities, where a very small number of vacancies, annual leave or sick time can significantly disrupt the delivery of services,” the spokesperson said.

They also pointed to initiatives underway to increase the number of nursing students, and a commitment to hire more emergency responders.

From coverage to sponsorship, 2022 was pivotal for growth of women’s sports