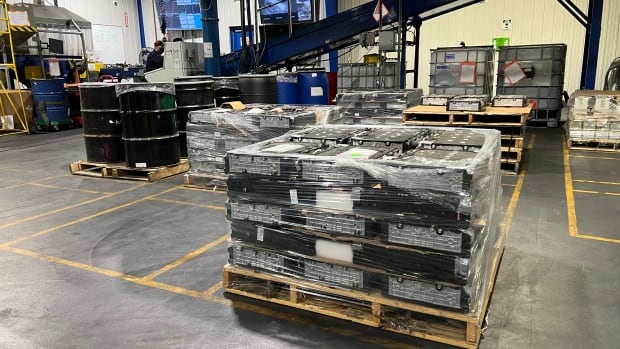 Electric vehicle sales are racing ahead, but is there a plan for the waste they create?


There’s a new venture taking place in a large, nondescript warehouse in Kingston, Ont.: Lithium-ion battery recycling. And it could be an important component of Canada’s net-zero future.

The facility, owned by Canadian startup Li-Cycle, houses stacks of depleted lithium-ion batteries that not long ago would have been destined for a landfill. The company is giving them new life — recycling the batteries that power most electric vehicles, phones and laptops.

“It’s kind of like urban mining,” said Li-Cycle CEO Ajay Kochar. “Basically, we can ensure that whatever we get out of the ground and put into batteries, we get as much of it back.”

Auto research firm J.D. Power estimates electric vehicle batteries have a lifespan of ten to twenty years — so electric vehicles have now been around long enough in Canada that some batteries will need to be replaced near the end of the decade.

Finding ways to recycle their costly, toxic batteries could address the environmental questions that arise from building electric vehicles in the first place.

WATCH | How EV batteries are turning from trash to treasure:

In Canada, EVs have now been around long enough that some will need to be replaced in the next few years, prompting some businesses to find ways to recycle all the batteries that power them and turn them into valuable materials.

Li-Cycle shreds the spent batteries and separates the materials through a water-based technique known as hydrometallurgical processing.

It sifts out metals and plastics for recycling, leaving the main byproduct — a dirt-like substance known as black mass. Black mass is made up of lithium, cobalt and nickel; critical minerals that are the building blocks of EV batteries.

Starting in 2023, Li-Cycle will send the black mass to a new facility it is building in Rochester, N.Y., where it can separate the black mass into valuable battery-grade materials to be used to make new EV batteries. Li-Cycle says the plant will be the first source of recycled battery-grade lithium carbonate production in North America.

Kochar said his company can recover 95 per cent of those critical minerals needed to make new EV batteries, and the process can happen repeatedly.

“There’s no limit on the number of times the same lithium, nickel and cobalt can be recycled,” he said.

The role critical minerals play in making EV batteries has come under a microscope recently. They are mined in just a few countries and demand has soared amid a tight supply, causing prices to spike.

Canada and the U.S. have each plowed ahead with plans this year to secure domestic supply chains of critical minerals to boost the extraction as well as recycling of material like lithium.

In early December, Ottawa unveiled a strategy that would allow for faster approvals on critical minerals projects.

At the time, Natural Resources Minister Jonathan Wilkinson said that without critical minerals, “there is no green energy transition.”

According to a 2020 report by the International Council on Clean Transportation, recycling old EV batteries could reduce the need for new mining by 20 per cent by 2040.

“We do need the material in the first place, so that needs to happen as cleanly as possible,” said Kochar. “But once we have the [critical minerals], we have to keep it in a circular loop and not have to go back and have more impact in terms of mining.”

Li-Cycle isn’t the only battery recycler in the country. Other Canadian players include Lithion Recycling and Retriev Technologies, and they’re all ramping up as Canada moves to mandate EV sales.

The federal government is proposing regulations that would require 20 per cent of all passenger vehicles sold in the country to be electric starting in 2026, and moving up to 60 per cent of all sales by 2030.

Josipa Petrunic, president and CEO of the Canadian Urban Transit Research and Innovation Consortium, says waste from depleted lithium-ion batteries is a problem right now, and already piling up globally.

“The reality is that battery waste is pretty much my generation’s nuclear waste problem,” she said. “So we’re going to have to figure it out, whether we like it or not.”

Can Canada capitalize on a potential treasure trove of critical minerals?

“We have to go faster. It cannot take us 12 to 15 years to permit new mines in this country if we want to successfully advance the energy transition,” said Natural Resource Minister Jonathan Wilkinson as the federal government released its critical minerals strategy Friday.

Incentives must connect to recycling programs

While Canada hasn’t pledged federal funding for recycling EV batteries, the U.S. is spending hundreds of millions of dollars on recycling projects. The U.S. Senate also just passed a bill to increase EV battery recycling, which could soon be signed into law.

“The government can catch up on recycling really fast by tying all of that money, billions of dollars, to recycling plans, so that cities and consumers can’t buy cars or buses that don’t have a recycling plan attached to them.”

Paul Rapoport was an early EV adopter, and bought his Tesla Model S in 2014 as a way to reduce vehicle emissions.

Back then, there was little information about EV battery recycling. He thinks recycling options will drive more consumers to EVs because they’ll feel better about where the batteries will end up.

“It’s very important to know that these batteries are not going to end up in a landfill forever and ever.”

The virus behind COVID-19 is mutating and immune-evasive. Here’s what that means

Want to run outdoors this winter? Here are some tips from a Canadian Olympic marathoner