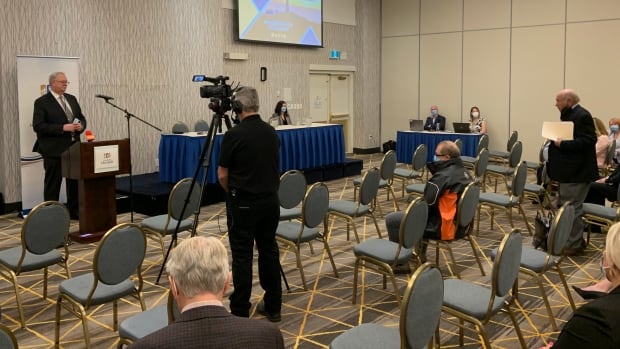 “It’s totally out of control,” said the attendee.

The man pointed to a lack of staff and long waits at emergency departments.

“What steps are you taking to improve this level of service to something acceptable?” he asked.

Earlier this month, Eastern Health revealed the emergency department at the Health Sciences Centre in St. John’s had been operating at more than double its capacity since June.

Temporary closures in rural emergency rooms have also become more frequent this year. The emergency room in Whitbourne has been closed for about three months, with no end in sight.

After the meeting, Baird told reporters the health authority is doing all it can to reduce emergency room closures, pointing to efforts to recruit physicians in rural areas.

“We’re hopeful that, you know, those efforts will provide fruit in the near term,” he said. “It’s really challenging to recruit physicians at this time.”

On Thursday, Osborne said the increase in compensation helped reduce closures in emergency rooms in some communities, including Baie Verte, and helped ensure there were no temporary closures at the Bonavista emergency room in September. However, that temporary increase is set to end on Oct. 31, and Osborne wouldn’t say if the provincial government plans to extend it.

“We will do what we need to do to make sure that we reduce the number of diversions in our Category B sites,” he said.

Number of MCP registrants without a family doctor spikes

Meanwhile, Eastern Health revealed the percentage of MCP registrants without a primary care provider almost doubled during the 2021-22 fiscal year.

According to the health authority’s report, 21.6 per cent of MCP registrants in the region didn’t have a family doctor during the 2021-2022 fiscal year, compared with 12.7 per cent in the 2020-21 fiscal year — which itself was an increase of 1.7 percentage points from the year before.

Baird said family doctor recruitment is a “top priority” and Eastern Health is planning to add more collaborative-care and walk-in clinics in the next year.

He said Immigration, Population Growth and Skills Minister Gerry Byrne is working on a “very dedicated recruitment process,” but didn’t reveal details on what that process would entail.

Osborne said the province’s same-day joint replacement clinic, announced earlier this year, will open in November. He also announced the provincial government has approved a one-time increase of 3,300 procedures to the regional caps on cataract surgeries in non-hospital settings.He said the increase reflects regional and provincial demand for the procedure.

“All non-hospital settings will be required to prioritize the longest waiting patients with this additional allocation,” he said.

According to Eastern Health’s annual report, expenditures were higher than projected — a reflection of a difficult year that included a cyberattack, a fourth wave of COVID-19, a staffing crunch and a review of mammography results.