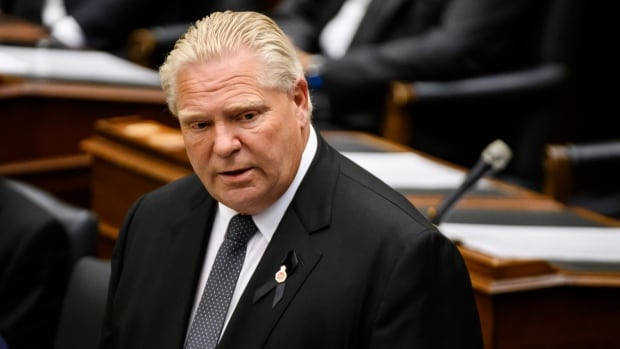 Doug Ford can likely invoke parliamentary privilege to avoid the Emergencies Act inquiry. Should he?


Doug Ford may be on solid legal footing as he seeks to invoke parliamentary privilege and avoid testifying at the Emergencies Act commission — but some experts question whether the Ontario premier is abusing the tactic.

“He’s using it in such a powerful way that it’s basically using parliamentary privilege almost as a sword,” said Mary Liston, an associate professor at the University of British Columbia’s Peter A. Allard School of Law.

“Like you’re protecting yourself — but you’re being aggressive about it.”

Ford and his former solicitor general Sylvia Jones were on Monday summoned to testify before the Public Order Emergency Commission, which is investigating the governmental response to last winter’s truck convoy protests.

The next day, lawyers for Ford and Jones filed an application for judicial review in Federal Court seeking to quash the summons, citing parliamentary privilege. They argue that the summons breaches that privilege by attempting to compel Ford and Jones to testify.

The move, said Liston, creates tension between the separation of powers and “other important constitutional principles, like the rule of law, like responsible governments, our whole democratic tradition of accountability and holding government to account.”

Ontario Premier Doug Ford says he will challenge a summons to testify at the inquiry into the federal government’s use of the Emergencies Act last winter. The commission leading the inquiry says it repeatedly asked Ford to participate, but those requests were denied.

It is a “kind of a potential, mini-constitutional crisis.”

Ford’s court filing argues that parliamentary privilege protects members of the Ontario Legislative Assembly from being compelled to testify in any proceeding while the legislature is in session, and, in practice, for 40 days before and after each session and periods when the house is adjourned.

“The summonses were issued without jurisdiction, pursuant to an error of law, and must be quashed,” the application said. “Irreparable harm will occur if a stay is not granted.”

Liston says Ford and Jones must prove that testimonial immunity — which is an important aspect of parliamentary privlege — applies in this case.

“And I think they’ll be able to do that quite easily,” she said. “But then you get into these grey areas of, well, what’s the scope of that?”

Steven Chaplin, a lawyer who has advised the federal government on constitutional law questions, including parliamentary privilege, says Ford’s legal team has good legal and constitutional grounds to claim the privilege.

“Now, whether or not it’s the proper use or not, that’s another thing,” he said.

Chaplin said the issue of parliamentary privilege has previously been taken up in the courts. The Supreme Court of Canada in a 2005 case, for example, set out several privileges to which provincial legislatures have a right — including immunity from being summoned in civil matters.

A federal court case the same year — involving the Gomery inquiry into the federal sponsorship scandal — affirmed that privilege also applied to commissions, he says.

The purpose of invoking such privilege is to protect the legislature from interference, so that parliamentarians won’t be called away from legislative business, Chaplin says.

“The legislature has, basically and constitutionally, first call on members’ attendance and participation, and people cannot be summonsed away from that,” he said.

Without privilege, for example, it’s possible a member of the legislature could be summoned to court by a political opponent to miss an upcoming vote, he said.

“So, suddenly, they’re not able to attend their constitutional functions,” he said. “And the courts have said that is a valid privilege.”

But Chaplin says there are also valid questions about whether that privilege should extend those 40 days before and after each session, something that extends back to the time of the Magna Carta, when it might take days or weeks to get to Parliament.

“People have tried different times to argue, well, the 40 days makes no sense in the 21st century.”

However, the 40-day rule is not codified, Liston said. She says there have been some scholarly literature and rulings from some speakers of the house on the issue, but the courts aren’t bound by those rules.

That suggests that the judicial review now before the Federal Court could find, when the legislature is not in session, that Ford could be compelled to testify, she said.

While the Ontario premier may have the right to invoke such privilege, his decision to do so in this case is a “particularly self-serving exercise” said Emmett MacFarlane, an associate professor of political science at the University of Waterloo.

He says politicians routinely waive privilege but Ford, in this case, is just trying to avoid answering tough questions about his leadership during the convoy protests.

Prime Minister Justin Trudeau, for example, has said he will testify before the commission.

“There’s a recognition that just because the privilege exists doesn’t mean that sometimes these are important duties or cases that the politicians should be actually taking part in. And this inquiry is no less important,” he said.

“And so it’s not just a broader kind of moral or ethical question of him dodging an inquiry for political reasons. He’s also, quite frankly, abusing privilege. He’s taking advantage of of an existing out, but not for any good reason.”

MacFarlane said Ford’s actions could be an opportunity to rethink how parliamentary privilege is utilized.

“I don’t think we should just willy nilly abolish all these privileges, but I think there is a lot of room to rethink their scope. And I don’t think there’s any justification for blanket immunity from being summoned to inquiries or to courts.

“And I think this is a clear example of why we should be rethinking these things.”