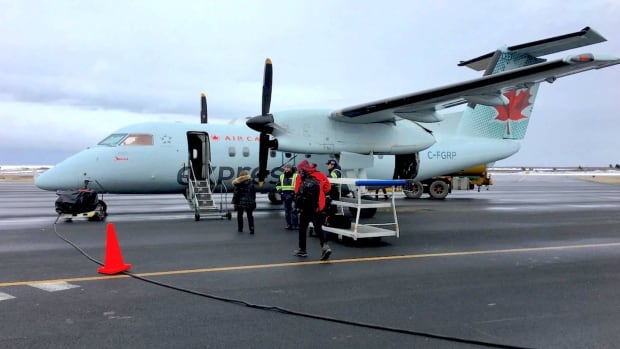 
Nearly 60 patients suffering from chronic pain on Quebec’s Magdalen Islands will have to wait two more months to receive specialized care after an Air Canada flight carrying a Montreal doctor was cancelled.

Dr. David Landry, a radiologist at Montreal’s Notre-Dame Hospital, was due to spend a week providing specialized pain management services to patients in the region – something he’s done every two months for the past five years.

“My clinics are very, very full and fill up very, very fast. So that’s why every day that I’m there counts,” Landry said.

But after arriving at Montreal’s Pierre Elliott Trudeau Airport two and a half hours before his flight on July 3 — with just a carry-on in hand to avoid baggage problems — Landry found out that Air Canada was delaying his flight because of technical issues with the aircraft.

Shortly after that, the flight was cancelled altogether due to factors related to the pandemic as well as staffing shortages, Landry said, citing a message he received from the airline.

The doctor is one of thousands of Canadian travellers who have had their plans upended due to a series of challenges plaguing many of the country’s airports amid soaring demand for travel.

Landry was finally able to get a flight out on July 5, but those 48 hours were impossible to make up to his patients.

“We tried to reschedule patients, but the schedule was already filled up and overloaded,” he said. He noted the situation is not the same as in major cities, in the sense that there are fewer technologists in the region, whom he needs alongside him to provide his services.

“Because of that, we could only reschedule one patient because we had a cancellation. So there’s 57 patients now that are going to have to wait until September when I have more time to go there,” he said.

Landry travels to the region to provide services such as diagnostic imaging as well as cortisone shots and other infiltrations to patients — services that are otherwise not available to them on the islands.

He said the postponement of his appointments is quite worrisome.

“You’re asking people to just live either on heavy painkillers — medication that [has] a lot of side effects — or to just live with the pain until I get there again,” he said.

For the last few years, travels to the small archipelago have been fraught with delays, reservation issues and miscommunication, according to Landry.

“It’s been very difficult to even get to the Magdalen Islands ever since the pandemic started, because Air Canada [stopped going there] during off season, like after September,” he said.

You’re asking people to just live either on heavy painkillers … or to just live with the pain.– Dr. David Landry, radiologist

When reached for comment, Air Canada said airline industry operations have been affected by resource issues at third-party service providers, saying this was the cause of Landry’s flight cancellation.

The airline says in these situations, it does everything possible to find alternative solutions for its customers, saying it “fully appreciates the disappointment and inconvenience” that schedule changes can cause, a statement to CBC News said.

Sophie Doucet, CEO of the regional health authority, the CISSS des Îles, says being a remote and isolated region, the Magdalan Islands relies heavily on hundreds of out-of-area medical specialists, whose visits allow patients to avoid having to travel for specialized services.

She says Pascan Aviation, a small Quebec regional airline with which the CISSS has a contract for the transportation of users, is the only airline that serves the Magdalen Islands year-round.

Doucet says the health authority has been in discussion with Pascan since last January in order to identify the problems and possible solutions for some of these travel issues.

She says if the situation deteriorates further, “I would fear that the Magdalen Islands would lose its appeal in attracting specialists to come [here],” she said.

Doucet said emergency services are still available at all times on the Islands.

Joël Arseneau, former mayor of the Magdalen Islands and current MNA for the riding, says he’s in talks with the CISSS to remedy the “unreliability” of the current congested system.

He suggests freeing up priority space on commercial flights for health-care workers and patients or considering the implementation of a parallel service using charter flights for these people.

According to Landry, if the situation doesn’t improve in the coming weeks or months, a lot fewer doctors will be willing to go to the islands — a situation that could lead to patient deaths.

“If they miss radiation therapy or if they miss a surgery, that could potentially be life-threatening,” he said.

Landry also made it clear that he doesn’t blame airline staff, who are “trying their best.”

“But my point is that those failures, they do have a lot of impact that may not be foreseen,” he said.