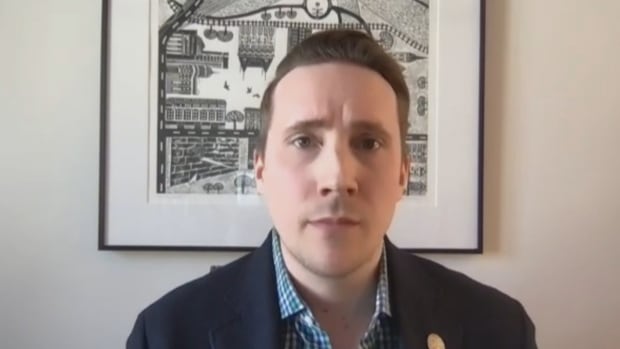 
A Winnipeg physician says his emergency department is reaching its breaking point and, for the first time, he’s thought of quitting.

Dr. Kristjan Thompson, an ER physician at St. Boniface Hospital, said he considered following “so many” of his nursing colleagues who left the department in the last few months due to “unreasonable working conditions and significant burnout/moral distress.”

“Please help us,” he wrote in a Twitter thread on Monday. Thompson is the current board chair of Doctors Manitoba and former president.

“Yesterday was the first day I thought about quitting. I love my job, my colleagues, and the people I care for each and every day … but what’s happening now is not sustainable. Things can improve, but we need help.”

Thompson explained his ER is packed, but not with patients who belong there. Some individuals are stuck in the ER for too long because they cannot be admitted into already-full hospital wards, which leaves a backlog of patients in the waiting room and hallways.

“If you don’t believe me, come and ask the person I saw who waited over 18 hours with a bowel obstruction, or the poor soul who waited over 10 hours while they were having a heart attack,” he wrote.

“Things are beyond critical right now, but not all hope is lost.”

Thompson called on health-care leadership to take some actions immediately, such as “laser-focused efforts” to retain existing staff, implement an ER surge protocol and increase inpatient capacity. Leadership is starting to listen to front-line workers, but their words must be translated into action, he said.

Thompson is expected to speak to media on Tuesday.

Nicole Ward, a former Winnipegger who was in town visiting family, said she feels dismayed by the health-care system after her family’s experience this past weekend.

Her uncle, who has end-stage bile duct cancer, went to Health Sciences Centre on Saturday because his biliary drain was malfunctioning and bile was accumulating in his body, Ward said. He also had a blood infection.

The senior, whose drainage site was infected, waited around 48 hours before he got it removed and replaced, as well as a second drain put in. She said it took about 40 hours for him to be admitted from the ER to the ward.

During his wait in the ER, Ward, who is a research scientist at Vanderbilt University Medical Center in Tennessee, checked on her uncle often.

She urged staff to check his vital signs after several hours and asked for a glass of water for a woman curled up in a ball with vomit lying in front of her.

Hospital staff are trying their best, she stressed, but it’s not enough.

You see the signs all over [the hospital] that say, ‘Patients first,’ and right now, it’s no one first.– Nicole Ward, family of cancer patient who waited nearly two days for hospital admission

“You see the signs all over [the hospital] that say, ‘Patients first,’ and right now, it’s no one first,” Ward said.

At one point, she called a longtime physician friend in Winnipeg to ask if it was better to take her uncle to his hospital instead. She was told it wasn’t worth it.

“He was working and he told me he was literally treading water and he’s a 20-year veteran of the ER,” Ward said.

“He told me he had 27 patients in his waiting room and that we were best to stay here” at HSC.

One doctor who spoke on the condition of anonymity for fear of retribution said hospitals normally see an uptick in patients at this time of year, but the nursing shortage leaves them unprepared.

“Emergency is so badly backed up and so poorly staffed that the patients who are there aren’t getting the proper monitoring. If you’re in a corner in a hallway with chest pain or a fever of 40 degrees and there’s no nurse to check on you, then by the time they get to you, you’re sicker.”

Manitoba Nurses Union president Darlene Jackson is calling on the province to implement some of the same monetary incentives other provinces are using to entice and keep people. It could bring back some nurses choosing to work for private agencies instead, she said.

Through the pandemic, Jackson said nurses would tell her the workload is overwhelming, but they were confident it would subside.

Nurses can’t ‘stick it out’: MNU

“What we’re finding is that nurses are saying, ‘It’s not getting better, it’s getting worse, and I can’t stick it out,'” Jackson said.

“We really need to put a thumb in that dam because it’s not just a bleed anymore, it’s a hemorrhage. We are hemorrhaging nurses out of our public health-care system.”

The Winnipeg Regional Health Authority said hospitals continue to be impacted by patient flow challenges and they’re continuing to explore all options to address retention and shift lower-acuity patients from emergency departments to other settings, such as urgent-care centres and long-term care homes.

Ward said she’s grateful her educational background gives her insight into the medical system so she can advocate for her uncle. She said it’s clear from her visit and her discussions with medical professionals that the health-care system is reeling.

Tractor trailer hangs off of overpass after crash