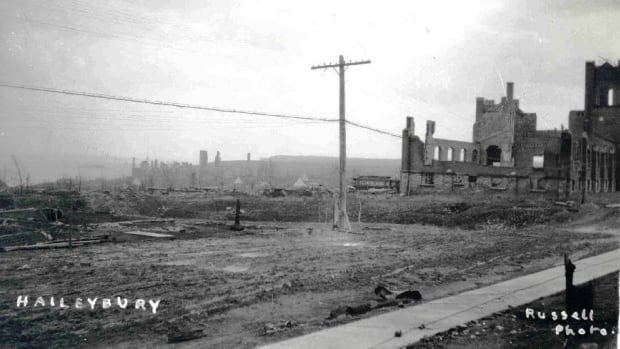 
It’s been a century since one of the worst wildfires in Ontario’s history destroyed entire villages, left thousands homeless and changed one northern town forever.

In the fall of 1922, flames killed 43 people and wiped the communities of Thornloe, Pearson and Uno Park off the map of the Temiskaming district.

However, it is often known as the “Haileybury fire” because most of the then-prosperous town burned, leaving thousands homeless.

We take you back to 1922, when several towns in the Temiskaming district were devastated by wildfire, including the then-prosperous town of Haileybury. We hear from local historian Chris Oslund, plus the voices of those who lives through the fire from our archives.

In the 1970s, Jack Mason told CBC Radio how people could smell smoke for days before the flames came into town on Oct. 4, 1922 and when the wind turned that afternoon, the fire was pushed into the heart of Haileybury.

“Then everybody realized that we were in trouble. We couldn’t fight it any longer. We had no water,” said Mason.

There were stories about windows exploding, kegs of nails and the terrazzo floor of banks melting in the extreme heat and farm animals dying in the fields with scorched lungs.

The thousands left homeless crowded into the few houses left standing and woke up to a heavy snowfall the following day.

“People did seek refuge down toward Cobalt, up to New Liskeard. They didn’t really know when they were leaving whether or not New Liskeard or Cobalt were any better off than they were in Haileybury,” said Chris Oslund, former curator of the Haileybury Museum.

Eighty-seven old streetcars from Toronto were sent up on the railroad to be used as temporary shelters. The Ontario government also provided lumber for the building of small houses to protect people from the coming winter.

“A lot of people didn’t have fire insurance at the time, there were stories of people trying to go down to the insurance brokerage house here as the fire was coming in. Of course, they were refused,” said Oslund.

He said the fire hit just as the silver mines in nearby Cobalt, which had made Haileybury one of the wealthiest towns in the north, were starting to decline and investors were instead turning to gold mines in Kirkland Lake and Timmins.

“What was the future to be? And yet, everybody was thinking the same, talking the same and obviously the town was going to be rebuilt.”

Oslund said many of those who decided to stay and rebuild, took out “relief loans” and then had trouble paying them back when the Great Depression hit a few years later.

“It was just easier to move on. So the population of Haileybury actually dropped by about half,” he said.

Oslund said when he first started working at the Haileybury Museum it was mostly focused on the history of the fire and he was involved in efforts to restore one of the streetcars and build a memorial on the town’s waterfront to those who perished.

Oslund will be giving guided tours this week as part of festivities marking 100 years since the Haileybury fire, which will also include a gala dinner, fireworks and a memorial dip in Lake Temiskaming to remember those who went into the water to get away from the fire.

“I think it’s important for us to know what happened before and learn from those lessons,” he said, noting that younger generations in Temiskaming still learn about the fire of 1922 in school.

Voters in northwestern Ontario have plenty of options in upcoming mayors races. Few of them are women