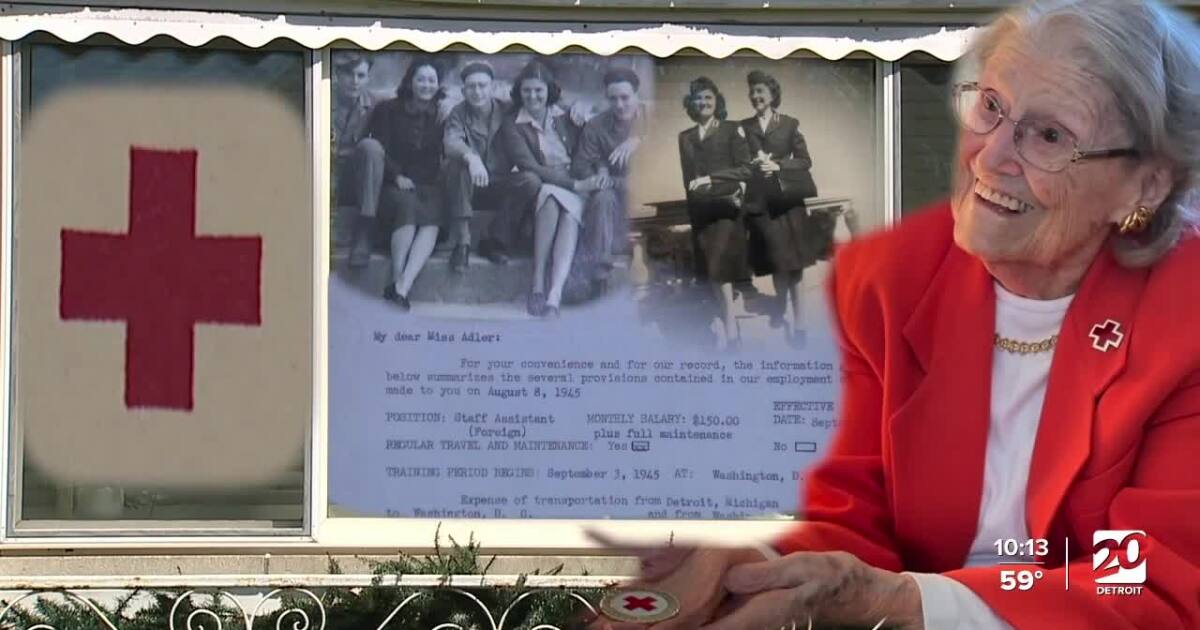 Detroiter, 100, honored for decades of service to Red Cross

Adler, 100, took a walk down memory lane as she looked through her scrapbook filled with photos from the 1940s.

“This is a treasure trove,” Mary Lynn Foster, the CEO of Red Cross’ Michigan region, said of the scrapbook.

“I haven’t looked at this book in a long time,” she said.

The collection of memories illustrate her two-year tour in Japan. The American Red Cross hired her in August 1945 to serve there as a “Red Cross girl.”

“So, your monthly salary was a mere $150,” Foster read Adler’s employment paper.

“Oh, that was a lot at that time,” Adler replied.

That time immediately followed the bombing of Hiroshima and Nagasaki.

“I went with hate — the way we now feel with Russia,” Adler recalled. “And I was not anxious to go there at all.”

But with time, Adler said those feelings changed as she and other Red Cross girls worked at the Banker’s Club and made sure American soldiers had a place to go off base for recreation and where they could feel at home. Adler said the club had pool tables, ping pong and the workers provided donuts, coffee and tours of Japan.

“It was a very wonderful time for us because we were doing what we thought was so important,” Adler said.

But of all the experiences she remembers the most, Adler explained it was “just a change in my feelings toward the people first.”

“Because I really did go thinking that it was so terrible that we were there and what the Japanese had done to us was just… then you came across young kids like this, which had gone through the war,” she said.

She grew fond of the local people and their culture.

For Adler’s service in Japan, then Germany and back home in the U.S., Foster honored Adler on the organization’s behalf.

She was presented with several mementos including a plaque.

“Bestowed upon you today for your just wonderful service with our esteemed gratitude,” Foster said.

The lifelong Detroiter now adds the items to her collection of memories tied to history she lived through that many will only read about.

Hundreds flee homes in northern Alberta due to flooding