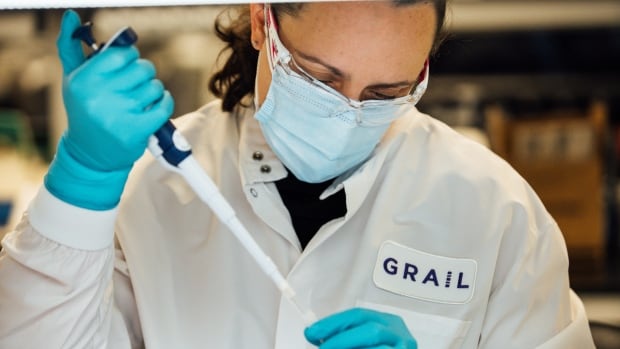 
A simple blood test to detect more than 50 types of cancer is being hailed by the makers of the test as a new approach to cancer screening, but Canadian medical experts caution the technology needs more work.

Earlier this month, Grail — an American biotech company — reported their latest results from their study on their Galleri blood test, a multi-cancer early detection test (MCED).

The test is designed to find multiple types of cancer through a blood sample by looking for signals of cancer on DNA that cells shed into the bloodstream.

In the company’s recent clinical trial of their product, they found that out of about 6,600 people over the age of 50, the test flagged potential cancer in 92 people.

Of those 92 people, most of them – 62 per cent – did not have cancer after they were followed up with further testing including imaging, scans and biopsies. Some of the flagged people did have cancer, with 35 people diagnosed with 36 cancers.

“The fact that we actually caught these cancers — 71 per cent of them do not have available screening options — I thought was remarkable,” said Dr. Jeffrey Michael Venstrom, chief medical officer with Grail.

Of the some 6,500 study participants who were not flagged on the blood test, 86 did go on to develop cancer in the next 12 months, found through traditional screening methods. It’s not clear how many cancers might have truly been present in that group but missed by the test and screening.

The results have not been published in a peer-reviewed journal.

The Galleri test is one of the first MCED tests available in the U.S. by prescription through a doctor. Although not yet available in Canada, MCED tests like Galleri are gaining attention as they may be useful if they’re proven to help prevent cancer deaths, says the American Cancer Society.

Recently, U.S. President Joe Biden announced further review of these tests through a government-funded clinical trial that will look at the efficacy of multiple types of early-screening tests.

The Galleri test has also caught the eye of the National Health Service in England, which is partnering with Grail on a three-year trial to test out the Galleri test and its effectiveness on 140,000 volunteers. Early results are expected next year.

It could be years before we see tests like these in Canada. For those who study early cancer detection and overdiagnosis, they say it’s too early to know if and how widespread a test like this one could be in Canada.

One researcher says a concern he has with the Galleri test is that it doesn’t find every cancer.

“For large tumours, the test is very effective and you can detect it. But if a tumour becomes smaller and smaller, the test is not very effective,” said Dr. Eleftherios Diamandis, a professor at the University of Toronto’s laboratory medicine department and a medical biochemist at Mount Sinai Hospital and University Health Network in Toronto.

Diamandis says based on his research, false positives with the test are also an issue.

“If you were interested in taking this test, you must understand that there is no perfect test [that] can tell you: you have cancer or you do not have cancer,” he said.

“The tests are imperfect … and it’s too early to decide if the Galleri test is good enough for solving this century-long quest to find biomarkers that counteract the presence of cancer at an early stage.”

That’s why Diamandis and other Canadian experts say the test needs to be scrutinized further and independently before it is used clinically, which could be years from now.

“We need to, of course, potentially be excited about these, but they need to be evaluated in a rigorous way where we know exactly what the benefits or the harms are, so that when people are thinking about getting these tests, they know what they’re dealing with,” said Dr. Eddy Lang, head of emergency medicine for the Calgary zone at Alberta Health Services and professor at the University of Calgary.

About 233,900 people in Canada will be diagnosed with cancer, and 85,100 cancer-related deaths are expected this year alone, according to Statistics Canada.

A U.S. biotech company, Grail, says its Galleri blood test was able to detect signs of cancer in otherwise healthy people, showing hopeful signs for early screening. But experts warn that some cancers never become life-threatening and early detection could lead to unnecessary or painful treatments.

The Galleri test is just one of several tests being trialed in hopes of catching cancers in earlier stages.

Venstrom says there are a lot of benefits of the test, including early detection.

In Grails’s recent Pathfinder study, about half of the 36 cancers discovered in the 35 people were at an early stage.

“This means that these patients are likely to go on to potentially curative intent therapy and have much better outcomes,” Venstrom said.

The Galleri test is only available in the U.S.

A Health Canada spokesperson told CBC News the federal health authority does not regulate testing services nor tests developed by public or private laboratories for their in-house use.

Provinces and territories are responsible for testing services.

‘Be an extremely cautious consumer’

Diamandis says he and colleagues have been studying Grail and the Galleri test for about seven years.

Based on the results they’ve reviewed, Diamandis says the test isn’t ready for clinical use as there are still some unknowns, like how many cancers are missed and false positivity rate.

Venstrom says the test’s false positive rate is less than one per cent.

Both Diamandis and Lang say overdiagnosis is a concern with any early detection tests.

That’s when “you find something … it’s there, but it would have never caused you any harm had you never known about it,” said Lang.

He says this is well-known for prostate cancer screening and for mammography screening for breast cancer.

“There’s always this risk that you’re going to find a small, indolent tumour that actually will never grow, never spread, and never come to your attention had you never looked for it in the first place. So I think the key thing is for people to be aware of the risks,” Lang added.

That’s why he and Diamandis say these multi-cancer detecting blood tests need to be rigorously studied by independent bodies that can offer guidelines on any potential usage.

“Unless there’s a recommendation that you should go ahead and have these things, I would be an extremely cautious consumer of these tests because once the test is drawn and you know the result, you may be going down a pathway that you will regret at the end of the day,” Lang said.

Don’t look up: Close encounters of the disaster movie kind