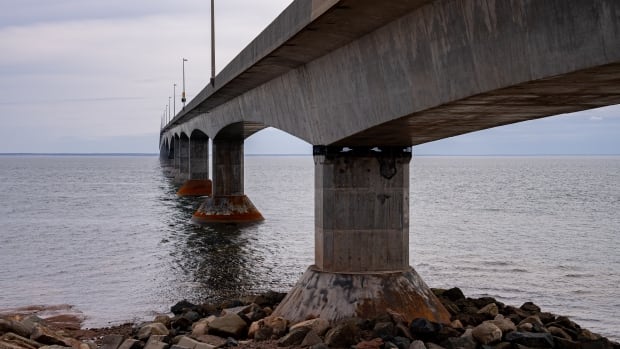 Deer swims all the way to P.E.I. only to be struck by transport truck


Diane Griffin was about to cross the Confederation Bridge on her way to New Brunswick on Tuesday when she pulled off to the side of the road to take a phone call.

Then, as she looked out her windshield, she thought she saw a white-tailed deer come up over the bank and graze in the grass.

Could it be? Deer are not native to P.E.I.

How did it get here? Should she hang up and call the authorities?

The intrigue then turned to shock.

“All of a sudden right in front of me it dashed across the road onto the pavement and a big transfer truck was coming off of the bridge and just, smuck. The poor deer was killed instantly.”

Officials with P.E.I.’s Department of Fish and Wildlife believe the deer is the first to successfully swim across the Northumberland Strait.

“There are no known white-tailed deer on P.E.I. but they are common in New Brunswick and Nova Scotia,” the department said in an email to CBC.

“We have occasionally collected dead deer on South Shore beaches that were presumed to have drowned.”

The deer was brought to the Atlantic Veterinary College. Due to the condition of the animal after the collision, little information could be obtained, but officials believe the deer was only on P.E.I. a short time before it was killed.

Griffin, a retired senator from P.E.I., said the incident “kept me awake” during the rest of her trip.

“We’re not used to seeing them. It’s when we go over to the New Brunswick side of the Confederation Bridge that most of us start to get more cautious about worrying about deer or moose,” she said.

“So it was very intriguing to even see the deer here to start with, but to see it hit such an end so suddenly was a pretty powerful thing to have happened.”

After 2½ years, B.C. reopens its side of border-spanning Peace Arch park