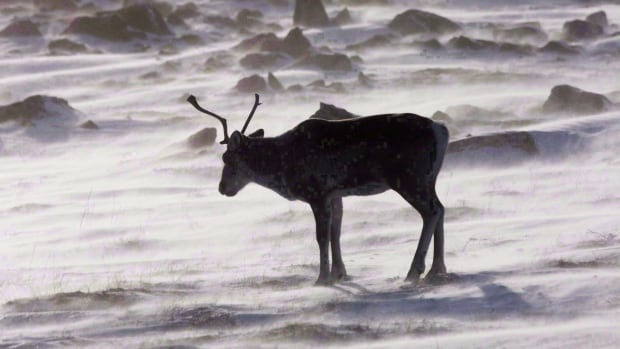 
Hello, Earthlings! This is our weekly newsletter on all things environmental, where we highlight trends and solutions that are moving us to a more sustainable world. (Sign up here to get it in your inbox every Thursday.)

Since the 1990s, some caribou populations in Canada’s North have declined by as much as 98 per cent because of challenges exacerbated by climate change.

Caribou migrate seasonally for food and in order to give birth to calves. Sea ice is a means of travel for the caribou from the islands to the mainland, but it has decreased in stability over the years because of a warming climate.

“We know that sea ice is being very affected by the changing conditions,” said Justina Ray, president and senior scientist of Wildlife Conservation Society Canada, in an interview with What On Earth host Laura Lynch.

“And then you add to that the fact that there’s more travel by shipping by boats during certain times of year, which can make the [caribou] crossover that much more precarious.”

The long-awaited Nunavut Land Use Plan (NLUP), which incorporates traditional Inuit knowledge and scientific knowledge, has the potential to protect the caribou. The Nunavut Planning Commission began developing the NLUP in 2007, and after more than a decade of development, it is finally in the consultation phase. This phase allows for extensive community input, with public hearings scheduled for November. The final draft of the NLUP is expected in 2022.

On Baffin Island in Iqaluit, the decline in caribou populations and a resulting moratorium on hunting caribou has made it difficult for Inuit to hold onto an important piece of their culture.

Paul Quassa, the member of the legislative assembly for Aggu in Nunavut, said Inuit rely on caribou not only for survival but also to pass down important cultural traditions. These traditions inform how the animal is used. Some parts are used for food, others for crafts and the rest for tools. In the end, nothing is wasted.

Quassa helped negotiate and sign the Nunavut Land Claims Agreement in 1993, which mandated the creation of the NLUP and its proactive approach to caribou conservation in the region. He has advocated for the plan to be enacted in the legislative assembly, but after 29 years, he’s still waiting.

“When we started negotiating our land claims, that was the whole purpose: to ensure that we retain our culture, which is hunting,” Quassa said. “But now we’re being limited in these areas that we wanted to retain.”

Their way of life is being infringed upon by competing interests in mining and other development, which is why the NLUP is increasingly important.

“Climate change and how we put our protection measurements within our territory, I think, are the two most important things that we need to really watch over,” Quassa said. “It’s often said that forms of wildlife management are not to per se manage animals, but to manage people.”

But the fear is that some of these locations will be claimed for development before the NLUP is enacted.

“I think we’re setting ourselves up for a lot of conflict and a lot of missed opportunities if we continue to leave these areas open,” said Brandon Laforest, senior specialist of Arctic species at World Wide Fund for Nature Canada (WWF).

The reasons for the plan’s delay are multifaceted, but mainly have to do with the extensive process of land use planning in the North.

“Obtaining information on land use, hearing the views of Nunavummiut and others through extensive consultation and hearings and developing a plan that fairly balances diverse interests is not an easy task,” said Megan MacLean, a spokesperson for Crown-Indigenous Relations and Northern Affairs, in a statement to CBC.

“With each draft of the plan, more key issues have been addressed. Following the upcoming hearings, the commission has indicated it will revise the plan, as necessary, and submit it for approval.”

Ray with the Wildlife Conservation Society Canada is cautious about the progress, as there has been very little action over the years. With the exception of two regional land use plans, a plan addressing the needs of the entire territory has yet to be completed.

“We’re already nervous about it because the last draft was five … six years ago, without any action,” said Ray.

“During that time, Nunavut [caribou] herds have suffered and there has been more interest [in developing those areas] and the threats have escalated. So it absolutely has to happen this time.”

John Eaton: “I am in complete agreement with the cultural burn article. As an ex-technical forest officer (assistant ranger), I remember having to inform an Indigenous person to put out a fire that he had lit in his meadow to burn off the encroaching willows, brush and unwanted species, and then hire him as a firefighter. The forest service in the 1960s and ’70s was focused solely on timber values to the detriment of the environmental component of our forests and, by replanting single species, created plantations, not true forests.”

Mark Hambridge: “We colonials need to humble ourselves. We need to look to and listen to the people who have been caring for the land for eons.”

There’s also a radio show and podcast! This week, an electrifying conversation with Saul Griffith, a scientist and inventor who has dedicated himself to halting climate change. “Electrify everything” is his clarion call. And the work, he says, begins right in your home. What On Earth airs Sunday at 12:30 p.m., 1 p.m. in Newfoundland. Subscribe on your favourite podcast app or hear it on demand at CBC Listen.

While there is undoubtedly greater public awareness of the effects of climate change, a lot of us are still largely clueless about where it will hit hardest. In fact, Canadians are unknowingly buying and building homes and other infrastructure in areas at high risk of flooding, wildfires and other climate change impacts, according to a report released last week by the Canadian Institute for Climate Choices. And almost no one has the information they need to be able to adapt. “There’s pretty poor understanding of climate risks and really poor risk-disclosure practices across the country,” said Dylan Clark, a senior research associate at the federally funded think-tank, and co-author of the report. There’s little to no public information on current flood, wildfire or permafrost thaw risks, he said. “Information that’s readily available to most decision-makers and investors and consumers does not provide enough information to make informed decisions — and that’s a key barrier here to adaptation.” Researchers were able to obtain data — available for a fee from a private company — that showed 325,000 buildings in Canada are at risk of flooding from heavy rainfall and another 625,000 are at risk from flooding because of rivers breaching their banks. Owners of those buildings “have no way of knowing that their properties are at risk of flooding,” the report said. Read the full story here.

A group of University of British Columbia researchers, set on uncovering the mysteries of the deep, have discovered a little-known type of transient orca that preys on grey whale calves and other large sea mammals.

After analyzing more than 100,000 photographs taken off the Canadian and U.S. west coasts, scientists encountered a group of “outer coast transient whales,” who rarely travel to the coast.

“These whales prefer deep water. So they were found offshore near canyon systems, which are very productive areas where there is a lot of nutrient upwelling, and it attracts other marine life,” said Josh McInnes, a marine mammal researcher at UBC who led the study.

Of the 155 encounters from 2006 to 2019, most of the whales were found in the offshore waters between Oregon and central California, but 26 were spotted off Vancouver Island.

McInnes said the outer coast whales are thought to be a subset of mammal-eating transients, also known as Bigg’s killer whales. Before the study, coastal and outer-coast transients were assumed to belong to a single population.

The difference between the two goes beyond just habitat, McInnes said.

“We see a seasonal trend where they show up in the spring and they follow the grey whale calves that are migrating up from Baja [California].”

McInnes said they will target the whales as prey along with elephant seals and oceanic dolphins, whereas Bigg’s transients prefer smaller mammals like harbour seals and porpoises.

The study revealed that when encountered outside California waters, the outer coast whales have been observed associating with other known coastal transient groups but exhibit a unique vocal dialect, distinct from other transient dialects in the coastal waters along the Pacific Northwest.

McInnes said the study, which was a collaboration between UBC and the National Oceanic and Atmospheric Administration (NOAA), also made another astonishing discovery. He said that far past the continental shelf in the open waters of the Pacific, they found an unknown group of killer whales who were eating sharks.

“We have no idea who they are,” McInnes said. “They looked like transients. There were some similarities to them as well. Some of them had what we call cookie-cutter bite marks, which are these circular scars on the body of the animal.”

He said these were caused by parasitic sharks that live far offshore, giving researchers an idea of where the killer whales might be spending their time.

This is only the first chapter of the work McInnes’s team is trying to conduct.

“For me, this is big, because there’s been a lot of information missing for some of these animals.”

The next step, McInnes said, will be to continue the research into new avenues of comparison between different communities of whales in B.C. and examine the diets and behaviours.

Top TikTok creator worth over $18 million