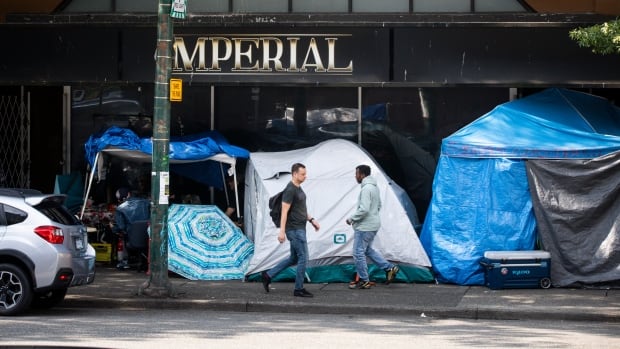 “This report reflects the risks and realities that people experiencing homelessness face every day,” Chief Coroner Lisa Lapointe wrote in a statement.

“We know that many are facing significant health concerns, including physical disabilities, mental health challenges and substance-use issues … My hope is that this information will help support positive action, both during Homelessness Action Week and beyond.”

The coroners service has been studying the number of deaths among people experiencing housing instability since 31 people died in 2012.

Nearly three-quarters of the people who died last year were between 30 and 59. More than half were living in the Fraser Health or Vancouver Coastal Health regions, data showed.

The coroner classified 74 per cent of the deaths as accidental. Of those accidental deaths, 87 per cent were found to have been caused by illicit drug toxicity.

“Our heartfelt condolences go out to all of the families and friends of loved ones who have lost their lives while experiencing homelessness. The people who died were our neighbours, friends and family members, and our thoughts are with everyone grieving their loss,” wrote Murray Rankin, the attorney general and minister responsible for housing, in a statement.

The coroner classified an individual experiencing homelessness as “a person living outdoors, in a makeshift shelter, a parked vehicle or “any other structure not intended for habitation. People who stayed overnight at an emergency shelter, a temporary shelter, in temporary modular housing, safe houses for youth or transition houses for women and children fleeing violence were also counted.

In southeastern B.C., 88 people in Nelson were without a home as of Feb. 1, 2022, according to the annual report card on homelessness issued Tuesday by the Nelson Committee on Homelessness, a non-profit organization.

The report said Nelson, a community of more than 10,000 residents, recorded the province’s second-highest rate of homelessness — eight out of every 1,000 people.

Community co-ordinator Jayne Caldwell said with the city’s vacancy rate at zero, more than 60 per cent of people in Nelson have been homeless for more than six months.

Caldwell said she hopes the new city council can work together to solve the issue.

Kids as young as 5 can soon get updated COVID boosters in U.S.