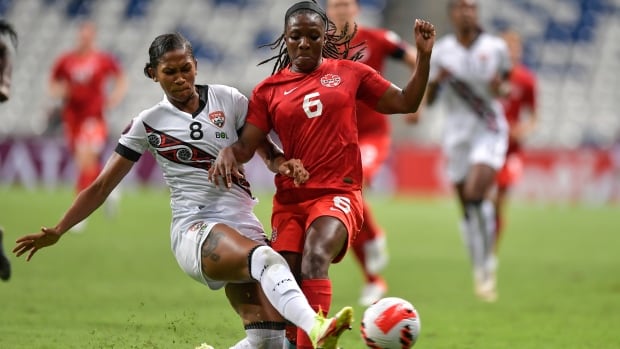 Rose, a native of Alliston, Ont., made the decision in 2014 to quit the sport after being cut from Canada’s Under-15 team, which at the time was overseen by current senior team coach Bev Priestman. A promising career appeared to have ended before it even started.

But her life took an unexpected turn when she was invited to train with Canada’s Under-17 side in 2015. Things went so well that by the end of the year she earned her first cap for Canada’s senior side as a 16-year-old. She’s been a mainstay of the national team ever since, her rise to the top as an Olympic champion capping off an amazing comeback that is a tribute to her strength of character.

However, Rose, now 23, will have to show similar resolve as she faces a major injury crisis. Last weekend, she was forced off the pitch a mere 20 minutes into Reading FC’s opening match of the English Women’s Super League season against Manchester United. Scans later showed Rose ruptured her Achilles. Reading issued a public statement on Thursday that was short on details, saying only that Rose “will be out of action for an extended period.”

“I really don’t have many words to describe the disappointment that I’m feeling,” Rose said in an Instagram post. “However, I have the determination, faith and a mindset to come back stronger both mentally and physically.”

The timing of the injury could not be worse for Rose, who played NCAA soccer for four seasons at the University of Florida before turning pro last year. While Reading finished a disappointing eighth place in the WSL in 2021-22, Rose impressed in her rookie campaign by scoring five goals in all competitions, firmly establishing herself as one of the league’s brightest newcomers. More was expected of her this season at Reading.

The injury also puts her international career on temporary hold, ruling her out for next month’s exhibition games against Argentina and Morocco, and November’s international window when Canada is expected to play two more friendlies.

Whether she’ll be able to come back in time for next summer’s FIFA World Cup, which will be co-hosted by Australia and New Zealand, is the million-dollar question at this point.

Even if Rose recovers in six months, she will have missed almost the entire WSL season with Reading, and would only have a short period of time to get some games under her belt and regain match fitness ahead of the World Cup. If she’s out longer, that window of opportunity shrinks even further, and would likely put her World Cup participation in jeopardy.

If Canada couldn’t count on Rose, it would be a big blow to its chances for success at the World Cup. Quick and powerful, Rose has blossomed into an important player for the Reds since her debut seven years ago, scoring 10 goals and tally nine assists in 73 appearances (43 starts).

Canadian forward Deanne Rose ruptured her Achilles in Reading’s 4-0 loss in their Women’s Super League season opener against Manchester United, and will be out of the lineup for an extended period of time.

Canada would be weaker without Rose

Canada Soccer Hall of Famer Amy Walsh, who earned 102 caps for the Canadian women’s team from 1997 to 2009, argues that Canada would be a weaker side without Rose.

“She’s a sprinter. That’s a huge aspect of her game, is her speed – both with the ball at her feet on the dribble, and in a flat-out sprint when she’s making a recovery run or making an attacking run,” Walsh told CBC Sports.

“So, that’s a big hole to fill if Deanne can’t recover for the World Cup. Obviously, Bev will have other attacking players to call upon. But I don’t know that she can call on anybody with the specific profile of Deanne, someone who can force opponents back because they have to show her that respect. She’s a big piece of the Canadian team.”

“With Deanne, you get an out-and-out striker, but also a genuine winger, so she’s someone who can play across the front three. She also gives the team a dimension where she can create that half space for Fleming to operate in. With Rose’s speed, the opponent’s defenders have to drop deeper, because she can beat them in a foot race or beat them on the turn, so that opens things up more for Fleming in the middle of the park,” Welsh explained.

Rose has displayed great poise for someone so young and inexperienced, coming through in the clutch for the Canadian team in some of its biggest moments.

It was Rose who opened the scoring in the third-place match at the 2016 Olympics, helping to pace Canada to a 2-1 win over hosts Brazil. In doing so, she became the youngest female Olympic goal scorer in history, at 17 years and 169 days, as the Canadians won a second consecutive bronze medal.

Last summer at the Tokyo Games, Rose played in all six games and started four times, including playing the full 120 minutes of regulation and extra time against Sweden in the final.

With Canada on the brink of a heartbreaking loss, Rose kept her nerve during the penalty shootout to tie things up and keep her nation’s hopes alive. That paved the way for teammate Julia Grosso to seal the gold medal for Canada with the team’s next penalty attempt.

“The consistency she’s shown at such a young age and ability to shine in big moments, that’s what you want from a striker, and that’s what Deanne gives you,” Walsh said.