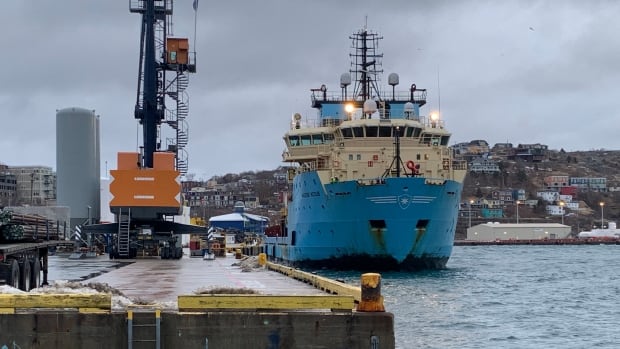 
The first ship carrying the bodies of the crew from the sinking of the Spanish fishing trawler Villa de Pitanxo arrived in St. John’s Friday morning.

The Maersk Nexus, carrying two of the crew recovered from the disaster, docked in St. John’s harbour early in the morning. Customs officers were seen boarding the vessel after it arrived.

The Spanish ship’s emergency beacons were activated before it sank around 2:30 a.m. NT in heavy seas on Tuesday, but there was no mayday call. Three survivors were found in a lifeboat, along with four dead. In total, nine bodies were recovered after a two-day search and rescue effort, which ended Thursday afternoon. Twelve crew were still missing when the search was called off.

The Canadian Coast Guard Ship Cygnus is escorting at least two other ships to shore with the survivors and the dead. The Playa de Menduina, another Spanish ship, is expected to arrive in St. John’s Saturday morning, carrying the three survivors — including the Villa de Pitanxo’s captain and his nephew — along with six more bodies.

The Transportation Safety Board of Canada told CBC News that Spain is responsible for the tragedy’s investigation under International Maritime Organization casualty investigation code.

The TSB said it will assist the Spanish investigation where possible, given current difficulties with travelling, but it will not investigate the accident.