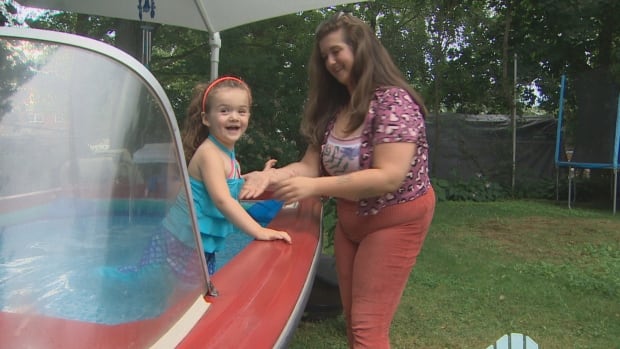 
One Dartmouth, N.S., woman has decided that having water inside a boat doesn’t have to be cause for alarm.

After about a month of work, Olivia Kendall says she’s completed turning an old motorboat into a backyard pool.

“It looked really beautiful. It was obviously very old,” Kendall said of the boat. “But I thought if it could keep water out, it could probably keep water in.”

Since purchasing her home in 2017, she said she’s been working on renovating the property. She was originally looking into stock tank pools — which use shallow, galvanized steel tanks that are usually found on farms for livestock — for her home, as they’ve recently become a trendy pool alternative.

She was discouraged, however, by the high costs of the tanks, and came across a listing for an old Mercury model “runabout” boat from the Chestnut Canoe Company on Facebook Marketplace for $300.

“On a whim, I bought it and the gentleman brought it straight to the backyard and I just started working away at it.”

She began telling people about the project to keep herself accountable, she said, and started putting the pool together. The first step was choosing a place for the boat to live in her backyard. Then she levelled the ground beneath it and built a frame to hold the boat steady.

Kendall said she went back to Facebook Marketplace, where she found some second-hand equipment, including a pool pump, sand filter and a salt water chlorinator — which creates chlorine gas from salt that is dissolved in the water — to start transforming the boat’s cockpit into a pool.

“Going the second-hand route allows you to meet interesting people who are knowledgeable [about] those items,” she explained, adding that the process was made a lot easier because of the help she got from sellers she purchased equipment from.

Then it was a matter of covering the deck of the boat with a pool liner, drilling into the hull of the boat to feed the pool hoses through and adding a waterfall attachment that funnels the water back into the pool once it’s gone through the filters.

Some finishing touches included a bin at the back of the pool, which she uses to store drinks for herself and her three-year-old daughter Adele, who’s added her own personal touch to the “reverse boat” with a variety of her toys.

Her daughter has spent any time she can in the pool and other kids in the neighbourhood are big fans of the project as well, she said.

There are still some things to be added to the boat, Kendall said. She plans on landscaping around the hull and adding lights to bring a tropical ambience. She called the pool a “prototype” and plans to teach herself how to build a permanent base for the boat once the swimming season is over.

She’s gotten a quick lesson in everything from chemistry to construction, she said, adding that she recommends taking the boat route to people who are thinking of adding a pool to their homes, especially through the pre-owned market.

“It forced me to learn how to do things on my own and be resourceful and trick my friends [into] coming over and lifting things for me,” Kendall said with a laugh.