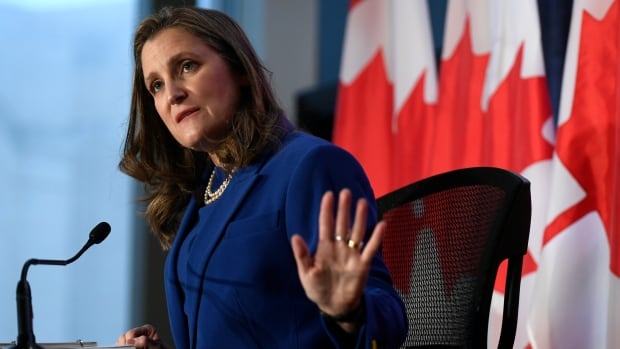 But those aren’t the only line items in the federal government’s new fiscal plan. Here are some of the budget’s lower-profile promises and funding initiatives.

It’s not clear how this new agency would work with the RCMP — which already operates a financial crime unit — and with other police forces. Multiple reviews, both internal and external, have suggested that the burden of fulfilling its policing contracts with provinces and municipalities is distracting the RCMP from its federal policing obligations.

Budget 2022 would give the Department of Public Safety and Emergency Preparedness $2 million this fiscal year to develop the new agency.

The government said further details will be announced in the 2022 fall economic and fiscal update.

The federal government is promising to launch a legislative review of the “digitalization of money and maintaining financial sector stability and security.”

“In the last several months, for example, there have been a number of high profile examples — both around the world and here in Canada — where digital assets and cryptocurrencies have been used to avoid global sanctions and fund illegal activities,” says the budget document.

Women and Gender Equality Canada will get $25 million over two years, starting in the 2022-23 fiscal year, for the “Menstrual Equity Fund.”

“The federal government is committed to addressing the barriers related to affordability and stigma that some Canadians face when accessing menstrual products,” reads the budget.

It follows on a promise the Liberal government made last year to make menstrual products freely available in all on-reserve schools.

After the government promised to tax vaping products in last year’s budget, this year’s budget finally gave us a date for implementation: Oct. 1 of this year.

According to the government’s projections, the vaping tax is expected to bring in $654 million over five years.

Effective July 1, Budget 2022 also eliminates the excise duty on low-alcohol beer — that’s beer with no more than 0.5 per cent alcohol by volume — bringing it in line with low-alcohol wine and spirits.

Canadians looking to start families could get some help at tax time.

The budget allows individuals to claim medical expenses related to surrogate motherhood or sperm, ova or embryo donations that are incurred in Canada in 2022 and subsequent taxation years.

That includes costs that have been reimbursed to a surrogate for in vitro fertilization expenses.

“Whether facing fertility issues, being part of a same-sex couple, or just wanting to be able to be a mom or a dad on their own terms, some Canadians rely on surrogacy and expensive procedures in order to build the family they dream of,” the budget document says.

The budget introduces a “labour mobility deduction,” which would provide tax recognition for up to $4,000 per year in eligible travel and temporary relocation expenses for eligible tradespeople and apprentices. This measure would apply to the 2022 and subsequent taxation years.

The government said it’s meant for workers in the construction trades who often travel to take on temporary jobs, frequently in rural and remote communities.

“Improving labour mobility for workers in the construction trades can help to address labour shortages and ensure that important projects, like housing, can be completed across the country,” reads the budget document.

Foreign credentials in the health sector

Acknowledging labour shortages in Canada’s health-care sector, the government is promising to work with internationally trained health-care professionals to fill those gaps.

Budget 2022 provides $115 million over five years, with $30 million annually thereafter, to help up to 11,000 internationally trained health-care professionals per year get their credentials recognized and find work in their fields.

The government said it also will support programs, including standardized national exams, to reduce barriers to foreign credential recognition for health care professionals.

For those who want, or need, to have different generations of a family living under the same roof, the government is promising to put aside money to help those Canadians update their homes.

Budget 2022 offers a “Multigenerational Home Renovation Tax Credit,” which would provide a homeowner with up to $7,500 to construct a secondary suite for a senior or an adult with a disability.

Starting in 2023, this refundable credit would allow families to claim 15 per cent of up to $50,000 in eligible renovation and construction costs incurred in constructing a secondary suite.

Governments have talked about linking up the cities of Toronto, Ottawa, Montreal and Quebec City with high-frequency rail service for years. The budget promises to nudge that project forward.

The budget sends $396.8 million over two years to Transport Canada and Infrastructure Canada for “planning and design steps” to run frequent trains between Toronto and Quebec City.