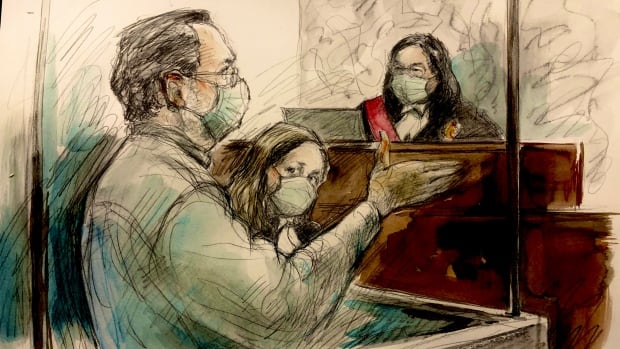 
The Crown is seeking a 24-and-a-half-year sentence for rapist Raymond Burke, whom a judge found guilty last year of kidnapping and sexually assaulting two women in Ontario in the 1980s.

During a sentencing hearing in Superior Court Friday morning, assistant Crown attorney Sandra Duffey said prosecutors are asking for consecutive sentences of 12 years and seven months for the 69-year-old’s offences against Angela English, and 12 years for his crimes against Nicole Murdock, with credit for time served.

Burke abducted and brutally attacked both women during separate incidents in southern Ontario in 1986, before fleeing to the United States and assuming a false identity. He was later arrested in Colorado for attacking another woman in 1987 and served decades in prison there, before being paroled and deported back to Canada in 2015.

A judge ordered a stay in his proceedings back in 2017 — allowing Burke to walk free for a time — before the Crown successfully appealed and he was once again committed to trial.

Duffey said Friday that should Burke receive a sentence in line with the Crown’s submissions, he would be eligible to apply for parole at the age of 75.

“It is only a lengthy penitentiary sentence that will communicate to others that they will be met with a crippling punishment if they decide to devalue, degrade, endanger and violate women and girls in the community,” Duffey said.

Both women previously told CBC News that Burke no longer holds any power over them.

“I’m a survivor. I will never allow you to take any more than you already have taken from me,” English said, reading from her victim impact statement.

“I won this battle.”

Duffey also said the Crown is taking into account Burke’s conduct in court when Justice Sandra Nishikawa handed down her decision last year.

Court previously heard that after the decision was rendered, Burke began to yell racial slurs at his lawyers before he turned to the two victims from the witness box and said he hoped they died of COVID, before calling them “whores.”

“Mr. Burke’s outburst and language that he used compounded the painful impact of his crimes and this trial on the victims in this case,” Duffey said.

“The words he used were demeaning and his behaviour was intimidating. It was a continuation of the behaviour they were subjected to in 1986.”

The long road to justice for two sexual assault victims

WARNING: This video contains distressing details. Two women are telling their stories of pain and trauma, three decades after they were sexually assaulted by a man named Raymond Burke. He managed to escape to the United States, but was deported to Toronto several years ago and now faces sentencing on convictions a host of charges including sexual assault, assault and kidnapping. 6:01

Burke is technically representing himself during the sentencing process, though court-appointed amicus lawyer Cynthia Fromstein also made submissions on his behalf Friday.

She called the Crown’s sentencing submissions “excessive” and maintained that a 10- to 15-year sentence would suffice.

“He is not the same person he was at the age of 35. He does not represent the same threat to the community as he did,” Fromstein said.

Burke also spoke in court and apologized for his actions — though notably, he did so at a hearing when his victims were not in the courtroom.

Reading from a handful of crumpled papers, Burke said that his time in prison has “left obvious mental scars” and impaired his long-term memory.

“The version of the assault given by the two women has shocked my 2022 conscience,” he said. “Now at 70 years of age, I have great difficulty coming to terms with the crimes the court has found me guilty of from when I was 33 years old.

“I desperately want to apologize for what happened in 1986.”

Nishikawa is expected to deliver her sentence on June 6.