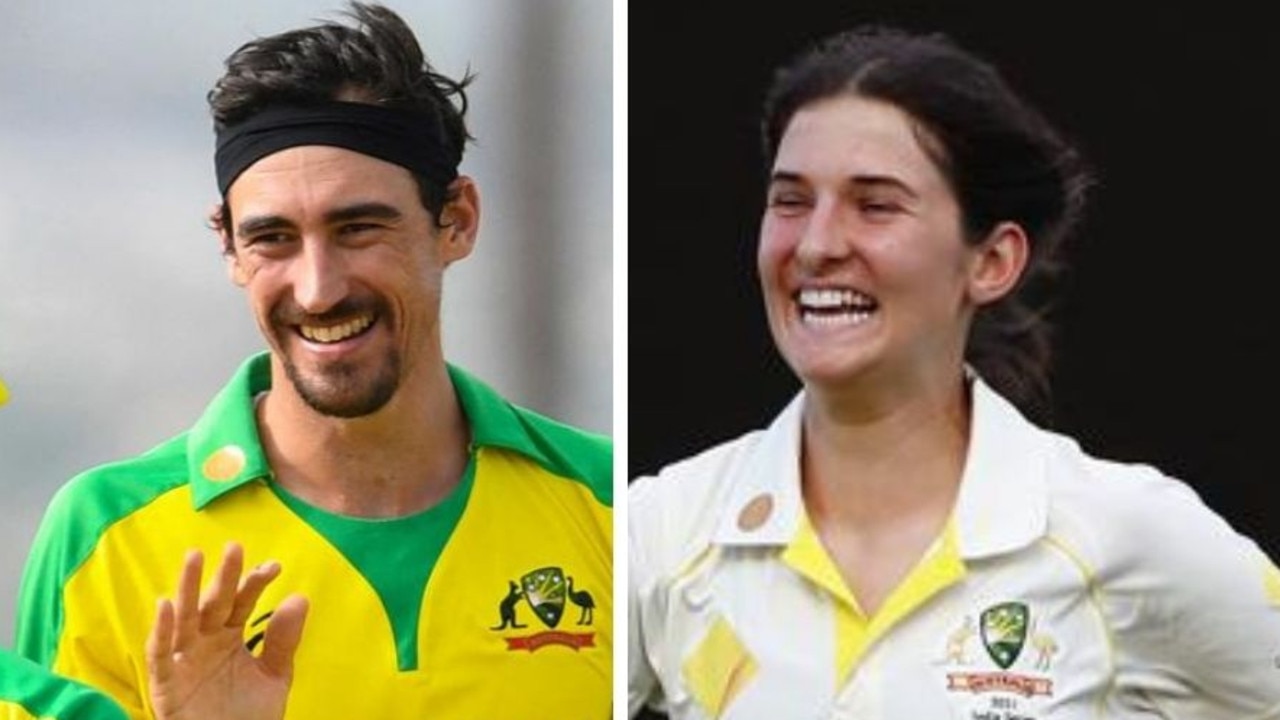 Fast bowler Mitchell Starc has been accompanying Australia’s women’s cricket team and went above and beyond to help them out.

Australian cricketer Mitchell Starc has been praised for a classy gesture to help out Australia’s women’s cricket team during their Test match against India.

The fast bowler, who is the husband of wicketkeeper Alyssa Healy, has accompanied the women’s side throughout the multi format series so he can spend more time with Healy before they have to go their separate ways for their respective cricketing commitments requiring strict quarantine.

Both Starc and Healy will be key players in Australia’s upcoming men’s and women’s Ashes series later this summer.

The left-arm paceman has been spotted on the boundary with the team throughout the ODIs and the Test match currently taking place on the Gold Coast.

Starc even had the honour of presenting teenage fast bowler Stella Campbell with her baggy green before Day 1 of the Test on Thursday.

“Getting my baggy green has been the highlight of my career,” Campbell told ABC Radio.

“To have my own to keep is pretty incredible and something I’ve dreamt of, and to be presented it by Mitch Starc was amazing. That was so special.”

On top of that, it’s been revealed Starc went above and beyond behind the scenes to help out Campbell and the rest of the Aussie women’s team.

Campbell had been struggling to grip her foot in the pitch when she was running into bowl and had to resort to placing a large amount of sawdust on the crease to try and give her more traction.

Starc noticed the issue and when he was told the women didn’t have longer spikes on the bottom of their shoes to help dig into the ground, he personally went out and bought some for the entire team.

“She had to put a bit of sawdust on (the crease). The bowlers came off and Starc said, ‘Have you got your long spikes?’

“The girls were like, ‘We’ve just got our normal spikes’.

“So what he did was he actually went out and bought all the bowlers long spikes so they have a different set just in case, depending on the conditions.”

Campbell herself confirmed Starc’s kind gesture: “I was slipping on the first day with my front foot, so Mitch Starc asked if we had any long spikes,” she said.

“I’ve never worn any before and none of us had any. So he went out and bought them all for us.

“I used them for the first time today.”

It must have worked a treat because Campbell claimed her maiden wicket in Test cricket with an absolute peach of a delivery that caught the outside edge of Taniya Bhatia’s bat and travelled safely into Healy’s gloves.

Starc has been training around the team and said it’s been a privilege to be allowed in to the inner sanctum of Australia’s women’s side.

“I’m very privileged to be able to be around the group and I guess help out where I can, whether it be in the background in the gym or in the nets and slot in and do my preparation when the girls aren’t around so I’m not in the way I guess,” the 31-year-old told Channel 7.

“And at the same time, be there to spend some time with Alyssa while we can and obviously we’re going to have to go our separate ways for the summer and then the schedules probably don’t align again.

“I’m very privileged to be around this group, they’re such a great group to be around, very inviting.

“To even be in the same rooms and around the same group is very special for me to be welcomed into.”

Heading into the final day of the match, Australia is 4-143 needing 85 more runs to avoid the follow-on, with a draw realitically the best hope for the Aussies.