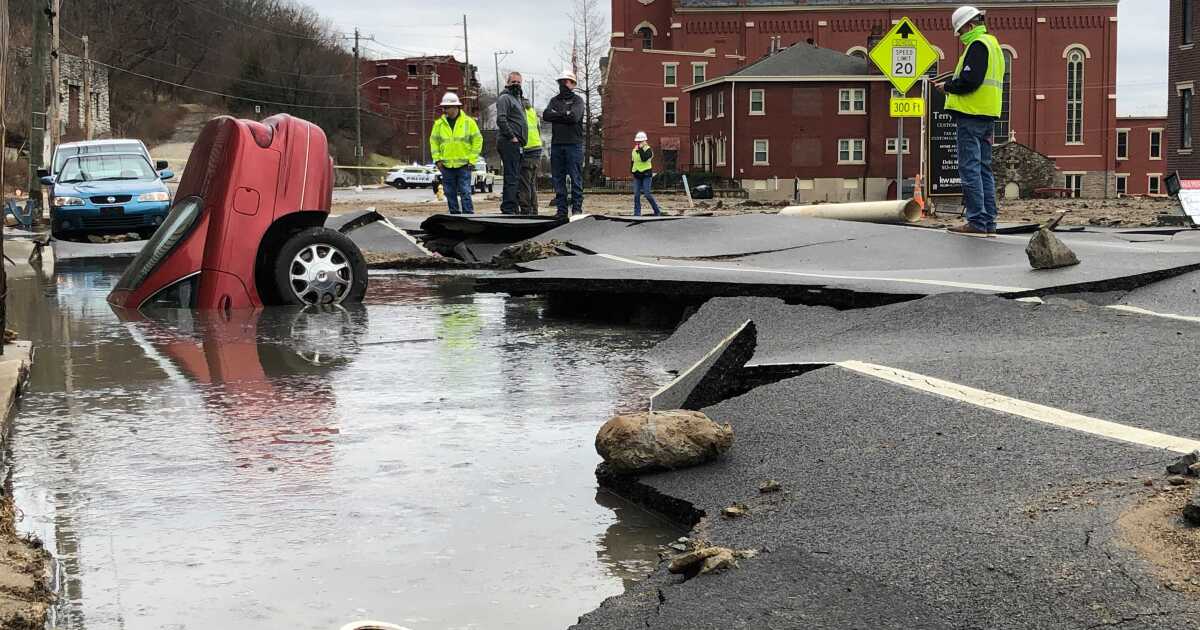 
CINCINNATI — Crews are on their second day of assessing and repairing a large water main break on Riverside Drive near the Le Blond Community Center. Roads in the area, including Riverside Drive, are still closed to traffic until further notice.

Water service for the area was not impacted, according to a release from GCWW, but some areas nearby may have experienced lower water pressure than normal on Saturday.

“Fortunately we have a second water main in this street and its purpose is to serve the individual homes,” said Jason Fleming, superintendent of water distribution for GCWW. “As of right now, that water main is still in service. We may need to do some work on it as well once we get a good look at what’s going on.”

Riverside Drive from Delta Av to Collins Av is closed due to a 60″ watermain break. No trucks will be able to pass between Bains and Delta. Collins has a railroad bridge preventing trucks over 10′ from passing.

A boil advisory has been issued for homes and businesses at 758-766 Steiner Street and 3406-3648 Hillside Avenue, GCWW said. Although these addresses are in Riverside, on the opposite side of town from the main break, Fleming said the drop in water pressure city-wide has triggered a precautionary boil advisory.

Ashley Crabb, who lives just a few houses from the main break, said the first floor of her home has been completely flooded. Rescue crews had to help her daughter escape through an upstairs window when water began rushing in, and Crabb said the family doesn’t expect to be able to save anything from the home’s lower levels.

“Honestly, we lost everything,” said Crabb. “You get somewhere and then something happens, because we just started getting this house together. We had drywall down there to work on the house and everything. Kids’ brand new Christmas presents, all of our medicine, everything we own is in there.”

Officials haven’t determined what caused the water main break, or how long it could impact traffic and homes in the area; there’s still a lot to do before they can assess the damage and determine what caused it.

“We really need to take a look at it to see what type of break it was to be able to even hazard a guess at what caused it,” said Fleming. “There’s several factors that could lead to a break like this: age-related deterioration of the main, weather, pressure surges. So it’s really hard to say right now until we get a look at it.”

Fleming said a 60-inch water main broke sometime between 11:00 a.m. and 12:00 p.m. on Saturday. Crews pumped water out of the hole in order to remove a car that fell into the collapsed portion of road.

Father Jason Williams of St. Rose Church on Riverside Avenue said the car was swallowed within an hour.

“When we first went out there, it was just parked in front of the other cars still,” Williams said. “Within about an hour the car had shifted a little this way and then within another hour it had done its nose dive.”

Williams said faith and charity will help those displaced by the water damage.

“I think especially in those moments where we experience in our own lives, in our own circumstances, whatever those struggles might be, to realize the Lord to be there with us,” Williams said. “The charity that other people to give, to support to help them discover that love of God for them through the love that others have for them.”

Cincinnati Water Works said it may take at least two more days to determine the cause of the water main break.

“This is one of our largest water mains that we have in the system here,” said Fleming. “So this is a pretty big one, even for us.”

He said crews hope to begin repairs by Monday, but he expects repairs to take several days. Riverside Drive will likely be closed for one to two weeks, he added.

No one in the area has been injured by the break, or the subsequent damage.

No cases in Qld after testing chaos