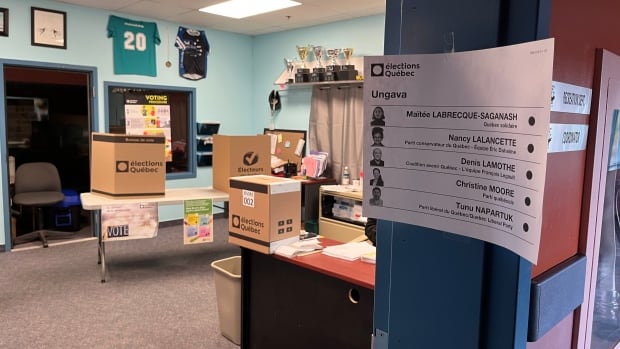 
Stories are emerging of Cree voters in the northern Quebec riding of Ungava who were unable to cast their ballots in Quebec’s provincial election this past Monday.

Cynthia Neeposh has spent most of her life in the Cree community of Mistissini and has lived in the same house for the last 15 years.

But on Monday, election workers said her name wasn’t on the voter list and she couldn’t vote.

“For myself, I didn’t feel right. It wasn’t fair. I was there to vote. It’s my right to vote,” she said, adding she received her voter card in the mail and it had her name and her correct address on it.

She filled out a form and left and says the whole experience left her feeling embarrassed and frustrated, adding she felt compelled to vote because there were strong Indigenous candidates running.

Cree activist and columnist Maïtée Labrecque-Saganash and Inuk Tunu Napartuk were both running in Ungava, against incumbent Denis Lamothe and two other candidates. Lamothe won a second term with 36.2 per cent of the vote.

For the second election in a row, the riding had the lowest voter turnout in the province, at 30.3 per cent, compared to 66.4 per cent in Quebec as a whole. In 2018, voter turnout in Ungava was 30.1 per cent.

Elections Quebec has not yet received any indication that there were irregularities during Monday’s vote in Ungava, according to Julie St-Arnaud Drolet. And no investigation is underway.

St-Arnaud Drolet encouraged Neeposh and anyone else who felt they were denied the right to vote to reach out.

“People in this situation can call Elections Quebec and we will be able to see if they are well registered on the list of electors,” she said.

Once the election results are verified, individuals or candidates have four days to officially contest a result and ask for a recount, a process that happens before a judge.

St-Arnaud Drolet said the verification for Ungava should be finished Thursday, so the four days would begin on Friday.

Nancy Voyageur was another Mistissini voter who was unable to vote Monday.

The voter card she received in the mail didn’t have her name on it, as it has in the past.

“This time it was just blank. I was told ‘You’re not on the list,'” said Voyageur, who brought her card with her along with two pieces of identification to the polling station. She said she was disappointed she wasn’t allowed to add her name as she always has in federal elections with proper identification.

Voyageur said her two sisters were also unable to vote.

“It was embarrassing. People were waiting behind me in line,” she said.

She said she has voted provincially many times before and has lived at the same address for 20 years.

Voyageur was also asked to fill out a form and told she would be able to vote in the next provincial election in four years.

‘We didn’t have problems before’

Gracie Chiskamish Sealhunter is from Chisasibi. She and her husband also arrived to vote on Monday but were turned away. They have voted before in provincial elections, but this time didn’t receive voter cards.

“This is the first time we couldn’t vote,” said Chiskamish Sealhunter. “I always vote. We didn’t have problems before.”

CBC North has spoken with other Cree people who described similar frustrations, as well as several non-Indigenous workers in Mistissini who were trying to vote for the first time in Ungava. They received voter cards without their names on them and were turned away on election day.

Under Quebec electoral rules, it is the responsibility of the voter to make sure their information is correct and they are on the voter list, said spokesperson St-Arnaud Drolet.

There is a period of revision and Elections Quebec tries by several means to spread the word in remote and Indigenous communities, she said. They include making voting and revision information available in eight Indigenous languages, including Cree and Inuktitut. People in remote regions are also allowed to vote in advance by mail and revision teams were sent to 23 Indigenous communities during the last week of September, she said.

Unlike in federal elections, a person cannot swear an oath, produce two pieces of identification and proof of address and be added to the voter list on election day. St-Arnaud said to allow that, the government would need to reform the Electoral Act, something the CAQ government has so far refused to do.

“We come across cases every election of voters who show up to vote without first checking their registration on the voters list,” said St. Arnaud Drolet.

Voting information was also sent to local band offices and ads and posters were placed in local newspapers, such as Nunatsiaq News, among other efforts.