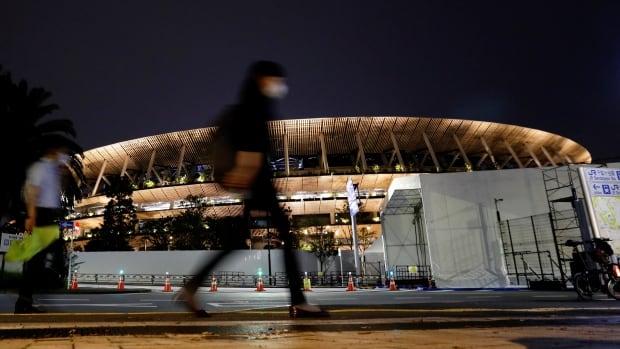 Tokyo reported the highest number of new COVID-19 cases in almost six months on Wednesday, with the Olympics due to open in the capital in just nine days.

The city government said there were 1,149 new cases, the highest daily tally since Jan. 22, adding to evidence that a new fifth wave of infections is under way, driven by more infectious virus variants and a low vaccination rate.

Amid rising cases, the government declared a renewed state of emergency for Tokyo and surrounding prefectures last week and Olympics organizers announced that no fans would be allowed at events in those areas.

“Once it’s on an increasing trend, it’s too late,” said Haruka Sakamoto, a physician and researcher at Keio University in Tokyo.

Health experts had warned that seasonal factors, increased mobility and the spread of variants would lead to a rebound this summer. Kyoto University professor Yuki Furuse earlier projected that new daily cases in Tokyo could rise to 1,000 in July and 2,000 in August, potentially maxing out hospital beds in the capital region.

The resurgence is “totally expected” given the spread of the contagious delta variant and the government’s decision to lift an earlier state of emergency on June 20, said infectious disease expert Kenji Shibuya, who is now running vaccination efforts in rural Fukushima prefecture.

The delta variant now accounts for more than 30 per cent of cases in Tokyo, and the rate is climbing.

While Japan has weathered the pandemic better than many countries, the nation’s deaths crossed the grim milestone of 15,000 on Wednesday, according to the Jiji news agency. Total cases stood at about 820,000, based on official data.

WATCH | COVID-19: What we know about mixing vaccines:

As of early Wednesday morning, Canada had reported 1,421,451 confirmed cases of COVID-19, with 5,076 considered active. The country’s COVID-19 death toll stood at 26,450. More than 43.4 million COVID-19 vaccine doses have been administered so far across the country, according to a CBC News tally.

In Atlantic Canada on Tuesday, health officials reported six new cases of COVID-19 — one new case in Nova Scotia and five in Newfoundland and Labrador aboard a ship.

“Testing of all crew is ongoing,” a statement from the province’s health officials said, noting that there is no risk to the community. “The ship and crew are following public health orders as directed by the Public Health Agency of Canada.”

In Quebec, health officials reported no new deaths on Tuesday and 54 new cases of COVID-19.

The update came as the province’s top doctor said young people in the province have the highest rates of COVID-19 infection among all unvaccinated individuals and he’s calling for all eligible people to get their shots as Ontario moves to Step 3 of its reopening plan this Friday.

In the Prairie provinces, Manitoba reported 25 new cases of COVID-19 on Tuesday and one additional death. The province is holding what Premier Brian Pallister called a “vax-a-thon” on Wednesday, in which vaccine supersites open to walk-in appointments.

Saskatchewan saw no additional deaths on Tuesday and 27 new cases of COVID-19.

Across the North, there were no new cases reported in the Northwest Territories or Nunavut on Tuesday. Yukon, which has been dealing with an uptick of cases, saw four new confirmed cases of COVID-19 on Tuesday.

-From CBC News and The Canadian Press, last updated at 6:55 a.m. ET

As of early Wednesday morning, more than 187.8 million cases of COVID-19 had been reported according to a tool from U.S.-based Johns Hopkins University, which has been collecting coronavirus data from nations around the world. The reported death toll stood at more than four million.

In the Americas, El Salvador’s congress voted overwhelmingly Tuesday to impose a 90-day ban on sporting events, concerts, festivals and other mass gatherings because of a surge in coronavirus cases. Face masks will be mandatory at any public event still allowed. Fines and closures will be assessed against any venue or organizer that violates the ban.

Officials reported 2,284 new cases in the first 10 days of July, 35 per cent more than in the same period of June. El Salvador has so far received enough coronavirus vaccine doses to cover about half of the country’s 6.5 million people. The country has registered 81,644 coronavirus infections and 2,457 COVID-19 deaths.

Guatemala declared a “state of prevention” for the entire country, limiting outdoor meetings and public demonstrations, after a dramatic spike in cases last week.

In the Asia-Pacific region, South Korea has confirmed 1,615 new COVID-19 patients, a new domestic record for daily cases, as authorities struggle to curb a viral resurgence that has placed its capital region under the toughest distancing rules. The newly reported cases Wednesday took the country’s total to 171,911 with 2,048 deaths.

In Africa, Tunisia is struggling to contain its worst outbreak ever, with the virus infecting parliament speaker Rached Ghannouchi, while Morocco has planned to send 100 intensive care beds and a similar number of ventilators to help tackle the crisis.

In Europe, Russia reported 786 coronavirus-related deaths on Wednesday, the most confirmed in a single day since the beginning of the pandemic, and 23,827 new cases nationwide.

The country is facing a surge in cases that authorities have blamed on the more infectious delta variant and a slow rate of vaccinations.

London’s mayor, meanwhile, has asked the body overseeing transport in the capital to enforce the use of face masks on buses and trains as a “condition of carriage” after legal restrictions in England are lifted on July 19. Sadiq Khan said Wednesday he is “not prepared” to put transport users in the capital “at risk” by removing the rules on face coverings after the legal obligation to wear them is lifted.

Scotland’s first minister Nicola Sturgeon said the country was still on track to lift almost all COVID-19 restrictions by Aug. 9, but that face coverings would be required.

-From Reuters and The Associated Press, last updated at 7 a.m. ET

The COVID-19 pandemic is ‘most certainly not over,’ WHO’s health…