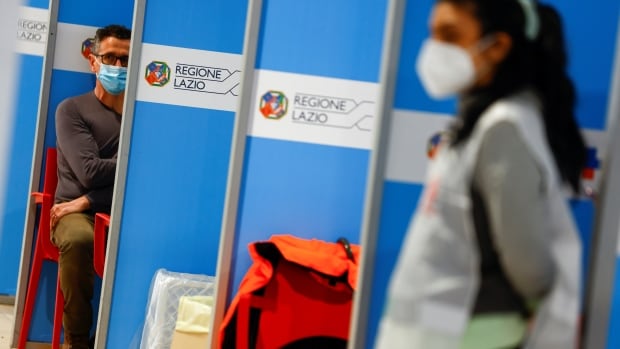 Italy surpassed 100,000 dead in the pandemic, a year after it became the first country in Europe to go on lockdown in a bid to stop the spread of COVID-19. The Italian Health Ministry on Monday said 318 people had died in the last 24 hours, bringing the total to 100,103, the second-highest in Europe after Britain.

Italy recorded its first virus death on Feb. 21, 2020, when a 78-year-old retired roofer from a winemaking town west of Venice who had been hospitalized with heart issues died.

Italy’s total virus cases surpassed three million last week, with a new surge powered by the highly contagious B117 variant that was first identified in Britain.

Italy imposed a nationwide lockdown last March 9, which continued for seven weeks and included a shutdown of all non-essential manufacturing.

In Nova Scotia, health officials reported no new cases of COVID-19 for the first time since Feb. 12.

Health officials in Quebec on Monday reported 579 new cases of COVID-19 as well as nine additional deaths due to the illness. Hospitalizations declined by two to 590, with 108 people in intensive care, which is one more than a day earlier.

Ontario reported 1,631 new cases of COVID-19 on Monday, though health officials noted that a data delay had resulted in a higher than expected number of new cases. The province also reported 10 additional deaths. Hospitalizations in the province increased to 626, with 282 people in intensive care units with COVID-19.

In the Prairie provinces, Manitoba reported 63 new cases of COVID-19 on Monday and one additional death.

Dr. Brent Roussin, the chief provincial public health officer, said that for the most part, numbers in the province continue to trend in the right direction — but he expressed concern about the number of people still in hospital and intensive care units. As of Monday, the province had 164 COVID-19 patients in hospital, with 22 in intensive care units.

“There continues to be a need for us to be on guard,” Roussin said. “The variants of concern add to that need. We are still at risk.”

Join us as experts answer some of your vaccine questions on a special CBC News National Town Hall on Tuesday, March 9. We’ll discuss the differences between vaccines, how vaccine passports work and where you might be in the queue. The special starts at 8 p.m. ET on CBC Gem and CBC News Network, and 10 p.m. local time (10:30 p.m. NST) on CBC Television.

Across the North, there were no new cases reported in Nunavut, the Northwest Territories or Yukon.

-From CBC News and The Canadian Press, last updated at 7 a.m. ET

WATCH | U.S. guidance a glimpse into life after COVID-19 vaccines:

New guidance from the U.S. Centers for Disease Control may provide a glimpse of what life could look like after more people get COVID-19 vaccines, and it includes maskless gatherings. 2:01

As of early Tuesday morning, more than 117.2 million cases of COVID-19 had been reported worldwide, with more than 66.3 million of those cases listed as recovered by Johns Hopkins University, which maintains a case-tracking tool. The global death toll stood at more than 2.6 million.

A senior World Health Organization official said that so-called “vaccine passports” for COVID-19 should not be used for international travel because of numerous concerns, including ethical considerations that coronavirus vaccines are not easily available globally.

At a press briefing on Monday, WHO emergencies chief Dr. Michael Ryan said there are “real practical and ethical considerations” for countries considering using vaccine certification as a condition for travel, noting that the UN health agency advises against it for now.

“Vaccination is just not available enough around the world and is not available certainly on an equitable basis,” Ryan said. WHO has previously noted that it’s still unknown how long immunity lasts from the numerous licensed COVID-19 vaccines and that data is still being collected.

Ryan also noted the strategy might be unfair to people who cannot be vaccinated for certain reasons and that requiring vaccine passports might allow “inequity and unfairness [to] be further branded into the system.”

In the Asia-Pacific region, Indonesia has received about 1.1 million ready-to-use doses of vaccine produced by AstraZeneca under the global vaccine-sharing COVAX facility.

Singapore has launched a travel “bubble” business hotel that allows executives to do face-to-face meetings without a risk of exposure to the coronavirus, in one of the world’s first such facilities.The hotel has meeting rooms fitted with airtight glass panels to reduce the risk of transmission and even has a special compartment with an ultraviolet light to sanitize documents so they can be shared between participants.

In the Americas, preliminary studies suggest the AstraZeneca vaccine will protect against the P1 variant of the coronavirus, Mauricio Zuma, the head of production at Brazil’s Fiocruz biomedical institute, said on Monday, confirming a Reuters report from Friday.

South Africa remained the hardest-hit country in Africa, with more than 1.5 million reported cases of COVID-19 and more than 50,800 deaths.

In Europe, Russia’s Sputnik V vaccine against COVID-19 could be produced in Europe for the first time after a commercial deal to produce it in Italy was signed by the Moscow-based RDIF sovereign wealth fund and Swiss-based pharmaceutical company Adienne.

Hungary set records Tuesday for the number of COVID-19 patients being treated in Hungarian hospitals and the number of new daily virus deaths amid a powerful surge in cases.

Nearly 350 people in Hungary were hospitalized with the virus in the last 24 hours, bringing the number of hospitalizations on Tuesday to 8,270, breaking the previous record of 8,045 set on Dec. 8. The number of patients on ventilators also set a new record with 833. Health-care experts say that could within days reach the threshold of 1,000, the maximum number of critical patients the country’s health system can handle.

A new round of lockdown measures went into effect in Hungary on Monday requiring most shops to close for two weeks. Kindergartens and primary schools have also been closed until April 7.

The number of people treated in French intensive care units for COVID-19 reached 3,849 on Monday, while total hospitalizations for the disease increased for the second day running, to 25,195.

In the Middle East, Iran’s total reported cases was approaching 1.7 million. The country has recorded more than 60,800 deaths.

-From The Associated Press and Reuters, last updated at 7 a.m. ET