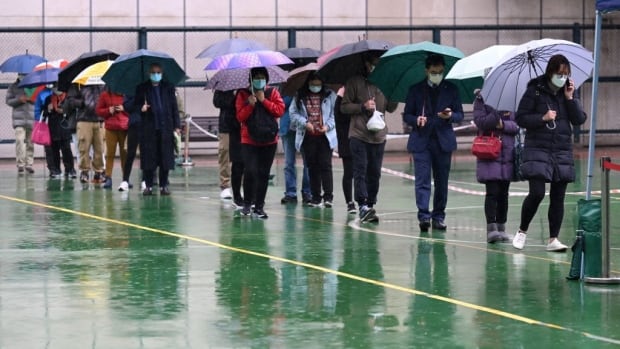 Hong Kong will roll out compulsory testing for COVID-19 starting in mid-March for its 7.4 million residents, leader Carrie Lam said on Tuesday, as university researchers predicted new infections could peak at a staggering 180,000 a day next month.

Stringent coronavirus rules would be in place until mid-April, with schools breaking early for summer and resuming the new year in August, she said, as authorities battle an “exponential” rise in infections that have overwhelmed the health-care system.

Hong Kong is home to some of the most densely populated districts in the world, with the majority of people living in high-rise apartment blocks with family members and often sharing cramped lifts.

“The coming one to three months are crucial in fighting the pandemic,” Lam told a news briefing.

Residents would need to test three times under the compulsory testing scheme with daily testing capacity reaching one million. Venues including school campuses could be used for testing and isolation, she said.

Lam said authorities were not considering a city-wide lockdown, such as those in mainland China. The central government would, however, help to build a temporary hospital.

Health authorities in the former British colony reported 6,211 new cases, 32 deaths and a further 9,369 cases that came up positive in preliminary tests. They said a backlog in testing meant they were unable to get a full picture.

In a paper titled “Modelling the fifth wave of COVID-19 in Hong Kong,” researchers at the University of Hong Kong said they updated their Feb. 10 study to show the number of daily deaths potentially peaking at near 100 by late March, and cumulative deaths potentially rising to around 3,206 by mid-May.

Less than two weeks ago, the same researchers had predicted daily infections potentially peaking at around 28,000 by mid-March with a total of 954 deaths by the end of June.

In the absence of much more intensive social distancing measures, like a citywide lockdown, “the trajectory of the fifth wave is unlikely to change substantially from its current course,” the study said.

You can read more from the Public Health Agency of Canada, which provides a detailed look at every region — including seven-day average test positivity rates — in its daily epidemiological updates.

WATCH | Adjusting to travel at this point of the pandemic:

Adjusting to travel at this point of the pandemic

As the federal government moves to change international travel restrictions and advisory, more people are booking trips but are considering different factors before planning a vacation. 2:03

In Alberta, Premier Jason Kenney on Monday said his government will soon be announcing how it plans to lift more restrictions.

“On Saturday, Feb. 26, the government will announce a final decision about proceeding to Phase 2 of our plan to lift almost all restrictions on March 1,” the premier tweeted.

“We will make a prudent decision based on the latest data,” he said.

In Quebec, high school and elementary school students will no longer be required to wear masks in several regions, including Montreal, starting March 7, sources have told Radio-Canada.

March 7 is the date students in most regions of Quebec are expected to return from March break.

As of Tuesday morning, more than 426.5 million cases of COVID-19 had been reported worldwide, according to Johns Hopkins University’s coronavirus tracker. The reported global death toll stood at more than 5.89 million.

In Europe, Germany is set to end most of its COVID-19 restrictions by March 20, a decision made last week, coinciding with moves by neighbouring Austria and Switzerland to drop many of their curbs sooner.

Chancellor Olaf Scholz said Germany appears to be past the peak of a wave of coronavirus infections fuelled by the highly contagious Omicron variant.

Starting Thursday, people in England will no longer be required to self-isolate, even after receiving a positive test. As of April, COVID-19 testing will no longer be free for the public, with the exception of the elderly and those at high risk of severe outcomes.

England to end all COVID-19 restrictions

British Prime Minister Boris Johnson announced that all COVID-19 restrictions in England are ending and people who test positive for the virus will not be legally obligated to self-isolate. 2:07

European Union member countries agreed Tuesday that they should further facilitate tourist travel into the 27-nation bloc for people who are vaccinated against the coronavirus or have recovered from COVID-19.

The European Council is recommending that EU nations next month lift all testing and quarantine requirements for people who have received vaccines authorized in the EU or approved by the World Health Organization.

In Asia-Pacific, New Zealand recorded 2,846 new community cases of COVID-19 on Tuesday, the Ministry of Health said in a statement. The country is at the highest Red settings within its COVID-19 Protection Framework. At Red settings, face masks become mandatory in many indoor environments and gatherings are limited to 100 people.

In the Americas, Chile reported 23,254 COVID-19 infections and 144 deaths from the disease in the last 24 hours, the Ministry of Health said Monday. New COVID-19 cases declined by nine per cent in seven days, but increased by 13 per cent over 14 days, amid a wave of infections caused by the Omicron variant of the virus, as well as an increase in vacation travels.