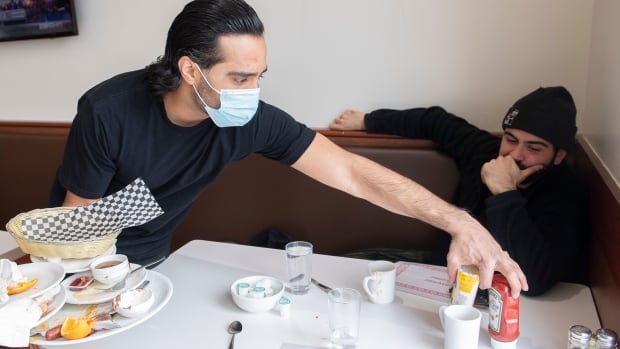 COVID-19 hospitalizations are ticking down in Canada’s two most populous provinces, which are easing some restrictions as of Monday.

The number of people hospitalized with COVID-19 in Ontario has steadily declined from 4,016 on Wednesday to 3,439 on Saturday, amounting to a drop of 577 patients over three days.

The province reported that 597 patients were in intensive care due to the illness, down by 10 from Friday.

Quebec marked its sixth straight day of declining hospitalizations linked to the virus. The province reported 2,975 patients in hospital with the illness on Saturday, down by 116 from the day before.

The province’s Health Ministry said intensive care cases rose by three to 231 after trending down over the past week.

Ontario will also lift some public health restrictions on Monday. Movie theatres, gyms, museums and indoor restaurant dining will be allowed to reopen at half capacity.

The province’s three-step plan to stop the spread of COVID-19, which went into effect Jan. 5, will see restrictions lifted in phases until March 14.

Ontario is among the provinces eyeing steps toward reopening as COVID-19 hospitalizations level off, but health officials and experts are warning there is plenty of pandemic still to come. 2:00

Restaurant dining rooms in Quebec will be allowed to reopen at half capacity starting Monday. They’ve been closed since New Year’s Eve. Up to four people from four different addresses or a maximum of two family bubbles will be allowed to share a table. However, restaurants will have to stop serving alcohol at 11 p.m. and will have to close at midnight.

The same numbers will apply to indoor private gatherings, which will be permitted after being banned since Dec. 31, 2021.

Extracurricular sports will also return in elementary schools, high schools, CEGEPs and universities on Monday. Participants over the age of 13 will have to show their vaccine passport.

Organized sports outside of school will be allowed only for those under the age of 18. A maximum of 25 participants will be allowed. While practices will be permitted, competitive matches are still on hold.

Entertainment venues and movie theatres will be allowed to open at 50 per cent capacity the following Monday.

Epidemiologist pushes back against talk of COVID-19 becoming endemic

Dr. Christopher Labos, an epidemiologist and cardiologist in Montreal, says it’s too early to think COVID-19 will become a more stable and predictable endemic disease, because the world could see new variants. 1:47

In British Columbia, an updated provincial health order now requires children age 12 to only have one dose of a vaccine to enter an event or setting where proof of vaccination is required.

In the Prairies, the premier of Saskatchewan is vowing to end the province’s proof of vaccine policy in the “not-too-distant future,” current public health orders in Manitoba were extended for at least another week and wastewater tests in Alberta suggests cases are declining in Calgary and Edmonton.

In the Atlantic, COVID-19 hospitalizations and active case counts in Newfoundland and Labrador have both dipped since Friday; Nova Scotia is reporting 87 people in designated COVID-19 units; Prince Edward Island confirmed the province’s 10th coronavirus death since the start of the pandemic; and schools in New Brunswick are set to reopen on Monday.

In the North, some schools in the Northwest Territories will be allowed to return to in-person classes on Monday. Meanwhile, documents obtained by CBC News showed a third of rapid tests shipped to Yukon were distributed to mines, sparking criticism.

As of Sunday morning, more than 372.8 million cases of COVID-19 had been reported worldwide, according to Johns Hopkins University’s case-tracking tool. The reported global death toll stood at more than 5.65 million.

In Europe, Russia reported a record daily number of COVID-19 cases on Sunday, setting a new high for a 10th consecutive day. New daily cases jumped to 121,228, up from 113,122 a day earlier. The government’s coronavirus task force also reported 617 deaths in the past 24 hours.

Of those, 13 were athletes or team officials who tested positive after arriving at the airport on Saturday. Of the total infections, 23 were among new airport arrivals, while 11 were people already in the “closed loop” bubble that separates event personnel from the public in an effort to curb the spread of infections.

Beijing officials said Sunday they sealed off several residential communities in the city’s northern district after two cases of COVID-19 were found.

Residents in the Anzhenli neighbourhood in Chaoyang district were sealed off on Saturday, and will not be allowed to leave their compound.

Beijing is on high alert as it prepares to host the Olympic Games, which open on Friday.

In the Americas, the Omicron variant is estimated to account for nearly all the coronavirus circulating in the United States. And even though it causes less severe disease for most people, the fact that it is more transmissible means more people are falling ill and dying.

“Omicron will push us over a million deaths,” said Andrew Noymer, a public health professor at the University of California, Irvine.