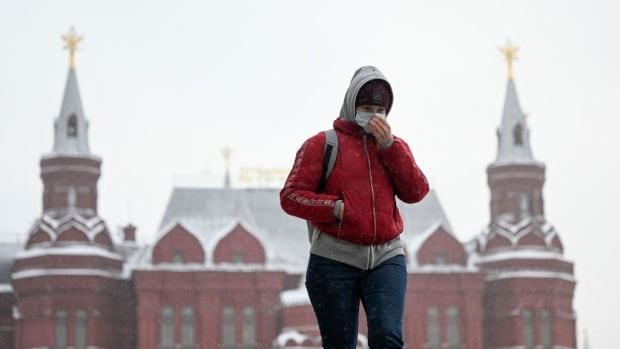 Coronavirus: What’s happening in Canada and around the world on Saturday

Russia confirmed 113,122 new daily infections, setting a record high for a ninth consecutive day, which the authorities blame on the spread of the Omicron variant.

Russia’s coronavirus task force said 668 deaths had been confirmed in the past 24 hours, after Russia’s pandemic death toll exceeded 700,000 on Friday.

Elsewhere in Europe, Britain will start rolling out Pfizer’s COVID-19 drug to vulnerable people next month, the Health Ministry said on Friday. Distribution of the drug will focus on people with compromised immune systems for whom the vaccine can be less effective.

The Health Ministry said Pfizer’s treatment, Paxlovid, which is a combination of Pfizer’s pill with an older antiviral, ritonavir, will be made available to thousands of people from Feb. 10.

Last week, Health Canada approved Paxlovid for use in people 18 and older. When taken within five days of infection, Pfizer’s clinical trials showed that the drug reduced risk of hospitalization or death by 85 per cent.

Dr. Howard Njoo, Canada’s deputy chief public health officer, said people who are immunocompromised, 80 years of age and over, or who may not have access to health care because of geographical or socioeconomic concerns are first in line to qualify for the treatment.

The first batch, consisting of 30,000 sets of pills, is already being distributed and more than 120,000 additional treatments are expected by March, Health Minister Jean-Yves Duclos has said.

Across Canada, the number of COVID-19 deaths and hospitalizations have climbed to record highs. But it appears the Omicron wave is waning with fewer overall infections, giving some experts optimism for the coming months. 3:43

In Central Canada, Ontario has reported the deaths of more than 1,000 people due to COVID-19 so far this month.

During the third week of January, the most recent week for which full figures are available, Public Health Ontario recorded an average of 52 COVID-19 deaths per day, a rate only exceeded at the peaks of the pandemic’s first and second waves.

“So many infections, even [of] a milder severity, will translate into a significant number of hospitalizations and deaths,” said Dr. Jerome Leis, head of infection prevention and control at Toronto’s Sunnybrook hospital.

Quebec on Friday reported 3,091 hospitalizations — down by 62 from a day earlier — with 228 people in intensive care. The province’s COVID-19 dashboard also showed 48 new deaths and 3,600 lab-confirmed cases.

In Alberta, Premier Jason Kenney says he wants to eliminate the province’s vaccine passport program as soon as it’s safe to do so. He said on Thursday that his government will move toward a widespread relaxation of public health measures once pressure on the health system subsides and COVID-19 hospitalizations trend downward. He said those changes could come by the end of March.

Premier Jason Kenney says it is too soon to consider removing the province’s vaccine passport system with Omicron cases still putting the health-care system under stress. 2:39

There were 1,496 people with COVID-19 in Alberta hospitals on Friday, the highest seen so far during the pandemic. There were 105 people with the illness in intensive care.

Saskatchewan has revised its public health orders in a move to treat the COVID-19 Omicron variant more like other common respiratory viruses such as influenza. Starting Friday, close contacts of people who test positive were no longer required to self-isolate.

Anyone who is infected, immunized or not, will still need to self-isolate for five days. That eases an isolation requirement of 10 days for the unvaccinated.

Total COVID-19 hospitalizations stood at 342 in Saskatchewan on Friday — up by 14 from a day earlier — with 34 people in ICUs. Saskatchewan also reported two deaths and 1,392 new cases on Friday.

Manitoba on Friday reported 715 hospitalizations due to COVID-19, an increase of four from the previous day. There are 52 COVID-19 patients in ICUs.

In Atlantic Canada, Newfoundland and Labrador health officials said Friday that 20 people were in hospital, with eight people in ICUs. The province, which sent students back to in-person education earlier this week, also reported 265 lab-confirmed cases and no new deaths.

Nova Scotia had 88 COVID-19 patients being treated in hospitals, a decrease of five from the day before, officials said Friday. There were 15 patients in ICUs. The province also reported 620 new cases and one death Friday.

Pfizer has started testing an Omicron-based COVID-19 vaccine to see if it can prevent infection and not only severe illness. The testing comes as researchers investigate an emerging variant described as Omicron’s twin. 2:02

In Prince Edward Island, 17 people were hospitalized for COVID-19 Friday, the same number as Thursday. Two patients were in ICUs. The province also reported 215 new cases.

In New Brunswick, officials on Friday reported a total of 135 COVID-19 hospitalizations, including 16 people in ICUs, which was an increase of eight over the previous day. The province also reported four additional deaths and 396 lab-confirmed cases.

In British Columbia, health officials on Friday said a total of 990 people are hospitalized wtih COVID-19, up by 13 from a day earlier, with 141 in the province’s ICUs. B.C. also reported nine new deaths.

WATCH | Strict COVID-19 protocols in place ahead of Olympics:

Strict COVID-19 protocols in place ahead of Olympics

Some members of Canada’s Olympic delegation were placed under COVID-19 protocols upon arrival in Beijing. These protocols are strict — with Chinese officials hoping to keep COVID-19 out of the Olympics just days before it begins. 2:00

As of Saturday morning, more than 370.3 million cases of COVID-19 had been reported worldwide, according to Johns Hopkins University’s case-tracking tool. The reported global death toll stood at more than 5.65 million.

In Asia, daily COVID-19 infections among athletes and team officials at the Beijing Winter Olympics jumped to 19 on Friday from two a day earlier, as Games organizers warned of more cases in the coming days. The opening ceremony will take place on Friday.

Including the athletes and officials, 36 Games-related personnel were found to be infected — 29 when they arrived at the Beijing airport and seven already in the “closed loop” bubble that separates event personnel from the public, the organizing committee said in a statement on Saturday.

In Indonesia, health officials are bracing for a third wave of COVID-19 infections as the highly transmissible Omicron variant drives a surge in new cases.

The country reported more than 11,500 new confirmed infections and 17 deaths in the last 24-hour period. It was the highest daily caseload since August last year when Indonesia was struggling to contain a Delta-driven wave.

In the Asia-Pacific region, New Zealand Prime Minister Jacinda Ardern said on Saturday that she is self-isolating after coming into close contact with a person infected with the coronavirus.

The exposure came on a flight from the town of Kerikeri to the largest city of Auckland. New Zealand’s governor general, Cindy Kiro, was also on the Jan. 22 flight and has also gone into isolation.

“The prime minister is asymptomatic and is feeling well,” Ardern’s office said in a statement.