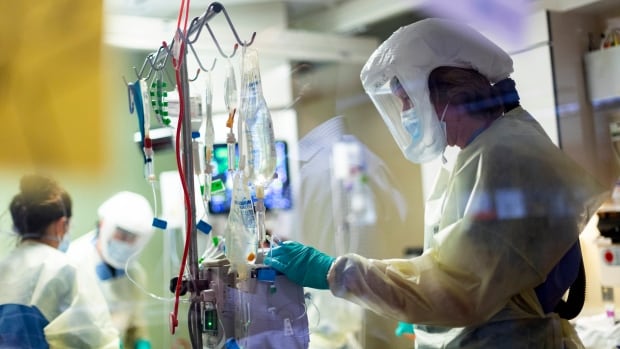 Coronavirus: What’s happening in Canada and around the world on Saturday

Dr. David Dowdy, an epidemiologist at Johns Hopkins Bloomberg School of Public Health, who has analyzed publicly reported state data, said of those vaccinated people who died with breakthrough infections, most caught the virus from an unvaccinated person.

“If we had been more effective in our vaccination, then I think it’s fair to say, we could have prevented 90 per cent of those deaths,” since mid-June, Dowdy said.

Tens of millions of Americans have refused to get vaccinated, allowing the highly contagious delta variant to tear through the country and send the death toll from 600,000 to 700,000 in three and a half months.

Most COVID-19 treatments currently available are largely ineffective but a pharmaceutical giant says its new pill could cut severe illness and death from the virus in half. 2:04

Florida suffered by far the most deaths of any state during that period, with the virus killing about 17,000 residents since the middle of June.

Texas was second with 13,000 deaths. The two states account for 15 per cent of the country’s population, but more than 30 per cent of the nation’s deaths since it crossed the 600,000 threshold.

At the same time, clinical trials by pharmaceutical giant Merck suggest its anti-viral pill called molnupiravir can cut in half the risk of hospitalization and death from COVID-19. Merck has yet to release the raw data, and their studies have not yet been peer-reviewed.

The Ontario government reversed course and is introducing a mandatory vaccination policy for all staff working in long-term care homes. Previously, the province would accept regular testing.

Long-Term Care Minister Rod Phillips on Friday said that as of Nov. 15, any staff, support workers, students and volunteers who are not fully vaccinated will not be allowed to enter facilities.

The only exception will be for people with valid medical exemptions.

Saskatchewan is the latest province to implement a vaccine passport as hospitals fill up with mostly unvaccinated COVID-19 patients. 2:05

As of early Saturday, more than 234.3 million cases of COVID-19 had been reported worldwide, according to Johns Hopkins University’s coronavirus-tracking tool. The reported global death toll stood at more than 4.7 million.

In the Americas, California will become the first U.S. state to require COVID-19 vaccinations for children to attend public and private schools in person.

Gov. Gavin Newsom on Friday announced that the COVID-19 vaccine will be added to 10 other immunizations already required for school kids, including those for measles and mumps.

Under California’s mandate, students in Grades 7-12 would have to be vaccinated by the semester following full U.S. approval of the shots for their age group, probably meaning by next July. It will be even longer for children in kindergarten through Grade 6.

Exemptions would be granted for medical reasons or because of religious or personal beliefs — but the exemption rules haven’t been written yet, pending public comment.

In South America, Brazil on Friday registered 18,578 new COVID-19 cases and 506 new deaths. Since the pandemic began in early 2020, the country has seen 21.4 million infections and about 597,000 fatalities, according to the country’s health ministry.

In Africa, health officials have confirmed more than 8.3 million cases COVID-19 across the continent, with more than 7.7 million recoveries and 211,000 deaths since the start of the pandemic.