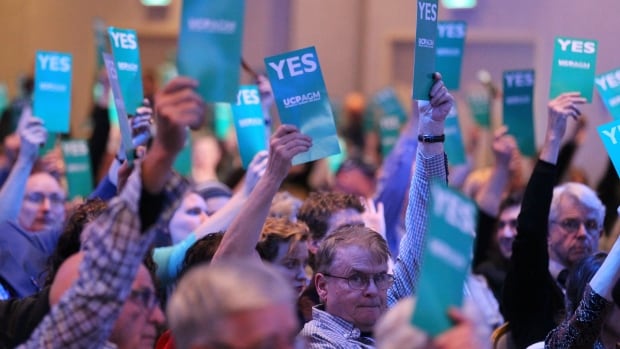 Conservatives in Alberta aren’t speaking the same language. And that’s a problem for the UCP


This column is an opinion by Alberta farmer and blogger David Cymbaluk. For more information about CBC’s Opinion section, please see the FAQ.

About a year ago, I wrote that Alberta’s United Conservative Party was fracturing along ideological lines that had been papered over by Jason Kenney’s choice to unite two conservative factions.

Since then, Kenney lost a leadership vote in May on a nearly perfect split of the party and Danielle Smith was elected party leader earlier this month with a bare majority of votes.

And, as UCP members gather for their annual general meeting this weekend in Edmonton, it is difficult to see how the party survives, going forward.

A millennium ago, there was no difference between astronomers and astrologers; it was a single intellectual pursuit.

Today, the two groups do not speak the same language.

Smith became leader earlier this month with the backing of the republican faction within the UCP.

The apologies she has made in her first week on the job are instructive about the current divide between the republicans and conservatives.

Anti-vaccine and pro-Putin sentiments are not controversial within the republican faction; these are views that are commonly expressed within that community.  Conservatives, on the other hand, find both views appalling (as a generalization).

This is because the republican faction, either directly or indirectly, consumes media from the alternative information ecosystem.

Within the alternative information ecosystem, anti-vaccine and pro-Russia sentiments are widely tolerated.

If a view is not accepted by the general public, that is considered an endorsement in the alternative information space. It is a contrarian social space.

The alternative information ecosystem is an environment where truth is not determined by facts and evidence, but rather is defined by the number of people willing to believe and share an idea.

If enough people are willing to believe in an idea within the alternative information ecosystem, then it must be true to the consumers within that social space.

To return to my analogy of astronomers and astrologers, conservatives are like astronomers studying a galaxy of facts following the immutable laws of nature.

The republicans are like astrologers, concerning themselves with the narratives linking unrelated facts into constellations that justify their beliefs.

The UCP: an unsettled party

Smith had to issue apologies because she regularly entered the alternative information ecosystem and found ideas there that she found appealing.

That is also why she was able to mobilize the republican faction to support her during the leadership race.

Because she is familiar with the alternative information ecosystem, she could speak their language.

Words and phrases that seem innocuous to most citizens have deep meaning to consumers of alternative media.

For example, the label “mainstream media” is not particularly meaningful to most people.

But to consumers of alternative media, if you apply the label, those consumers immediately recognize you as a member of their group.

This is my point, that conservatives and republicans no longer speak the same social language.

They do not consume the same media and therefore do not have the same social frames of reference.

The reaction of the two factions to Smith’s apologies is also instructive.

The conservative faction is annoyed that it was necessary and that she had to be forced into the apologies.

The republicans are disconcerted that she apologized at all.

It confirms to them that there is a nefarious force behind the scenes forcing politicians to do things they don’t want to do, and therefore affirms republicans’ choice to consume alternative media.

Smith, having been elected party leader, now forces the conservative faction to make a choice as they prepare for the May 2023 provincial election.

Which do they dislike less: the republicans or the NDP? Do they vote UCP to prevent the NDP from being elected, or do they stay home or vote for a third party, allowing the NDP to obtain a plurality of votes?

Smith did not earn an overwhelming vote from the party membership.

The majority of the caucus she inherited supported other candidates. And now her control over caucus will be determined by the outcome of her election to the Legislative Assembly by way of Brooks-Medicine Hat.

The byelection, which will be held Nov. 8, was made possible by the resignation of the riding’s MLA, Michaela Frey.

Although byelections are notoriously unreliable predictors of popular sentiment, in this case, what Smith must demonstrate is that she can unite the two party factions within her selected constituency.

If she can demonstrate that traditional conservative voters are willing to tolerate some alternative facts if it means defeating the NDP, then the caucus will likely fall in line and not cause trouble.

On the other hand, if conservative voters stay home and force Smith to rely on republican voters only, then self-interest will pressure many caucus members into pushing for a change in direction.

The UCP is a party divided.

The divisions are deep and structural and appear to be growing with time.

As long as the alternative information ecosystem persists, it is difficult to see a new consensus developing that will unify the factions.

The true test on whether the UCP is a single party will be revealed at the ballot box in next year’s general election.

Do you have a strong opinion that could add insight, illuminate an issue in the news, or change how people think about an issue? We want to hear from you. Here’s how to pitch to us.