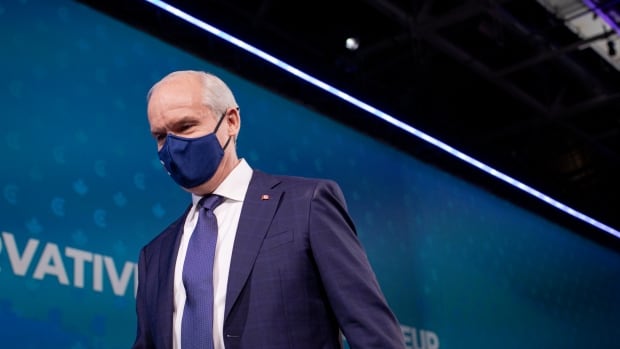 
The president of the Conservative Party says party national council member Bert Chen’s sponsorship of a petition “attacking” leader Erin O’Toole puts him at risk of being dropped from the council.

“When you hold an office in the party, there’s an expectation that your conduct is such that it doesn’t detract or harm the interests or the reputation of … the national council on which you serve … the party and … the leader,” Rob Batherson, president of the Conservative Party of Canada, told CBC News.

Only hours after the Conservatives’ election loss was confirmed, Chen, who represents Ontario on the Conservative party’s national council, publicly challenged O’Toole’s leadership.

Chen started an online petition calling for O’Toole to face an earlier leadership review. The current one is scheduled for two years from now, in 2023.

Batherson said he’s received many complaints from members across the country who think Chen is misusing his position on the national council.

“Use that position in a constructive way, to engage the leadership on conveying views that you’re hearing from the members,” he said, adding that council members should not go “down a path where you’re literally lighting a torch before all the ballots have been actually counted.”

In an email, Chen told CBC he is merely representing the views of many members. He said his petition has received more signatures than another one that was started in support of O’Toole’s leadership.

“I have received overwhelming support in favour of my petition from members of the Conservative Party. This can be evidenced by the more than 4,000 signatures to my petition, versus the 2,000 in support of Mr. O’Toole,” Chen wrote.

“A national councillor’s duty is to represent the concerns of the membership, not to run interference for a leader who has lost their confidence. I will continue to act in the best interest of our membership, and I am confident that my colleagues on National Council respect my duty to the membership.”

Last week, Chen told CBC’s Power and Politics that he and many other members felt “betrayed and upset” after O’Toole moved the party’s election platform to the centre, contradicting the “true blue” image he ran on in the leadership race just one year earlier.

“Conservatives believe in integrity and we believe in accountability, so integrity means keeping true to your beliefs and what you’ve communicated that you will run on, and not changing them halfway through an election or on a dime,” Chen said.

Batherson said it’s fine for Chen to have these opinions but, as a party office holder, he should have expressed them behind closed doors to the members of the national council first.

“Would the media have paid as much attention to Bert Chen, an average party member, launching a petition, versus Bert Chen, a member of national council, launching the petition?” he asked.

Batherson said the party’s constitution allows for the removal or suspension of a member of the national council if the other council members feel the conduct in question has hurt the reputation of the party or leader.

Batherson said council members will review all the complaints submitted and give Chen the opportunity to explain why he chose to act in such “a public and aggressive way.”

The council is expected to decide on Chen’s fate at their next meeting, set for mid-October.