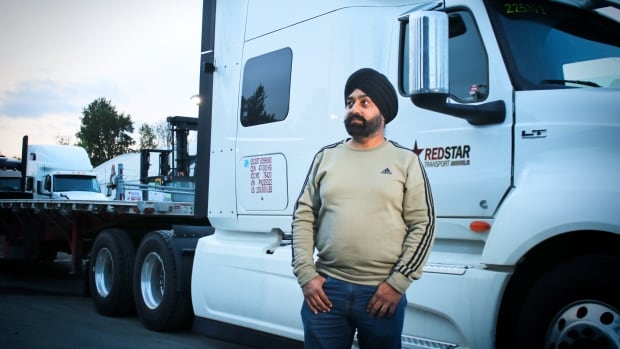 Commercial truck business in B.C. is booming but drivers say they’re running out of places to park


A parking lot for semi-trucks in Aldergrove, B.C., is packed bumper-to-bumper as drivers go home for the night — a sight all too familiar for Sukhvinder Chhina, who says finding a place to park his big rig overnight is becoming increasingly difficult.

“We have to park on the street many times,” said the truck driver, who works for Red Star Transport in Aldergrove, a community in the Township of Langley about 59 kilometres east of Vancouver.

“We’re not doing it by choice. It’s very frustrating.”

CBC News has spoken to several truck drivers who say they have few options left for overnight parking, especially south of the Fraser River, as the increase in drivers in B.C. has led to fuller parking lots.

This also means some drivers wind up parking illegally — on the side of residential streets, in unsafe areas, or are asking farmers to park on their property, says Navi Brar, a truck driver from Abbotsford, who also operates a trucking company.

According to the Insurance Corporation of British Columbia (ICBC) — the province’s public auto insurance provider — there were 69,000 active commercial Class 1 driver licences in 2017, which have since increased to 75,000 in 2021.

A Class 1 licence is needed to drive a semi-truck and can be used for all other vehicles except a motorcycle, according to ICBC.

That doesn’t include the number of trucks arriving in B.C. from other provinces or the U.S. to drop off and pick up goods.

Drivers and city officials are calling for more solutions, including more parking lots and an increase in the number of trucks allowed to park on agricultural land unfeasible for farming, which requires permission from the local city council and the Agricultural Land Commission (ALC).

Trucks can be parked in industrial zones such as lots owned by transportation and trucking companies, commercial truck parks, rest stops and on farms under specific local zoning rules.

“Our fleet grows every year by several hundred vehicles a year. And that’s just due to population growth,” said Dave Earle, president of the B.C. Trucking Association, who says more drivers are needed to meet growing demand in the province as a result of population growth.

Earle says parking challenges are especially common in urban areas, primarily in B.C.’s Fraser Valley, where most trucks are registered.

According to the City of Abbotsford, the number of tickets issued to commercial vehicles, including those with a gross vehicle weight of 5,500 kilograms or more, trucks with trailers as well as cabs parked illegally on city streets and private properties, grew from 165 in 2015 to 1,187 in 2022.

“[It’s] a growing problem and one that we fear will continue to grow, as pressure on our land continues,” said Earle. “There’s huge frustration.”

Jatinder Gill, who owns Red Star Transport, says he had five trucks in his fleet in 2018. Now, he has 40.

When his one-acre lot gets full, Gill says some of his employees have to park their trucks illegally. He says parking tickets cost the company between $1,000 to $1,500 a month.

Gill says demand for business is high, and a growing fleet is needed to meet it, but buying more land is simply too expensive. So the company is shouldering the parking tickets instead. While on the weekdays, it’s not as common for all the trucks to be parked at the same time, it’s even more difficult on the weekends when many drivers are home, he says.

“There is frustration … anger, but you can’t do anything,” he said.

Brar says within the last five years some owners of private land have also nearly doubled fees charging upwards of $700 per month for a truck to park on their property.

The safety of the driver and truck is another concern, Brar adds, especially for those who have no choice but to park on the streets — as trucks, tires and trailers “get stolen all the time.”

The Ministry of Transportation and Infrastructure says it operates one overnight parking site at Highway 91 at Nordel Way between Surrey and Delta. Another one in North Surrey, which has room for 106 commercial trucks, is under construction and slated to open in 2023.

Truck facilities are also being considered as part of the Fraser Valley Highway 1 Corridor Improvement Program, which includes widening Highway 1 between Langley and Abbotsford, the ministry said, adding that it continues to explore other opportunities for commercial parking.

“I think we need to protect our farmland because that’s where we get our food, but we do need to take a look at some of those lands which are not feasible for farming and how we can potentially use them for truck parking,” said Sidhu, adding it’s important for all levels of government to help find solutions.

Depending on the municipality, there are specific limits on how many commercial trucks can be parked on agricultural land that are not for farm use.

In Abbotsford, for example, a maximum of two commercial trucks can be parked — if one of the trucks is owned by a resident of the property, says Braun.

Braun says while there has been an increase in truck parking spaces in Abbotsford, it’s still challenging to push for more.

“The Minister of Agriculture and the ALC … are not receptive to taking more land out. And yet we need transportation to move goods and services. So I don’t understand where the disconnect is at the provincial level,” he said.

In one instance, the City of Abbotsford submitted an application for 115 agricultural properties with a total area of 288 hectares (711 acres) to be used for industrial purposes that was refused in 2018 by the ALC, which found the lands were still capable of supporting agriculture.

The Agricultural Land Commission, whose core mandate is to preserve agricultural land, says property owners can apply to use their land for non-farm use, such as truck parking.

However, that typically requires a gravel or pavement lot — rendering the land unsuitable for agriculture.

It says using more land for parking will decrease the amount of land available for farming.

“Agricultural land does not necessarily require good quality soil,” the commission said in an email to CBC News.

Without immediate solutions in sight, drivers like Chhina say they are left in limbo.

“We are living away from our homes for this work. So we at least need some respect.”